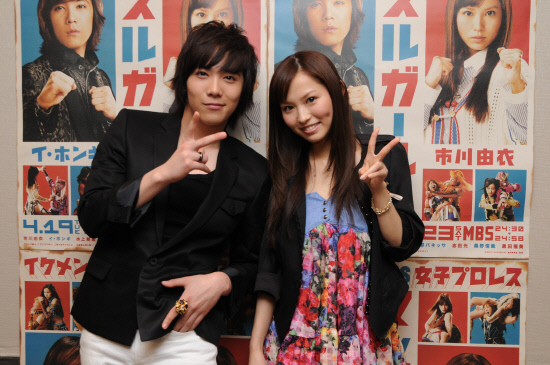 F.T. Island have released the MV for the song “Haruka” which is the theme song for the Jdorama Muscle Girl. Lead singer Lee Hong-ki stars as the male lead in the Jdorama opposite Japanese actress Ichikawa Yui in a cute feel good story about a Korean idol going underground in Japan to find his mother and ends up helping out a bunch of professional female wrestlers who were facing the closure of their gym.  Check out the MV here.

If you’ve been watching the Jdorama, you’ll recognize the song.  The MV is pretty simple with the band performing amid a geometrical light show that pulses to the beat of the song.  F.T. Island also has another song on the Jdorama’s OST entitled “Isuka.”  The story is fast paced and quirky and while I’m not loving it- I am still watching. I like that it’s a bit different with the story focusing on the world of professional women’s wrestling in Japan and that its heroines are a bit tougher than those in your average Jdorama.