Army soldiers need to fanboy over girl groups too 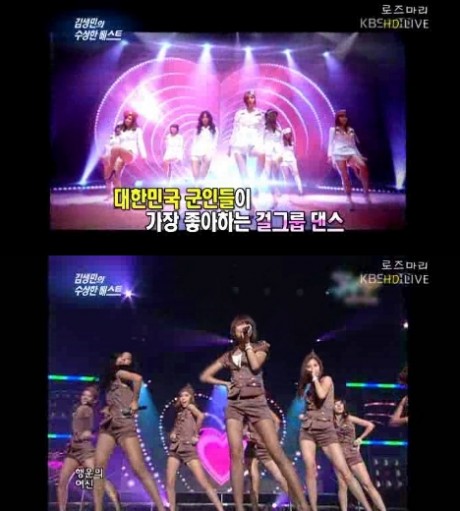 While roughing it out in the fields and climbing mountains to serve their nation, Korean army soldiers must crave some entertainment of their own too. Okay, I admit, I don’t really know what the soldiers do for training, but it must be really tough. That is why girl groups play an important role in Korea; with every performance, they provide these hard-working soldiers with 5 minutes of pure bliss and ectasy.

So, which dance choreography has been fawned over the most by the army soldiers?

On a recent episode of KBS 2TV‘s Entertainment Relay, reporters unveiled results of a survey for “Girl Group Dances Liked By Army Soldiers”, conducted among 100 students who had returned from their mandatory military enlistment. SNSD managed to clinch first place with the ever-so-famous-and-parodied Leg Swift Dance, which they performed for Genie. The dance move (well, the cynical me says it’s just kicking, but maybe it’s because I’m female) was incredibly well-received as it can be easily mimicked and also displayed the girls’ long and slender legs flawlessly.

Korea always seems to have these completely pointless, but amusingly entertaining polls and surveys, no?