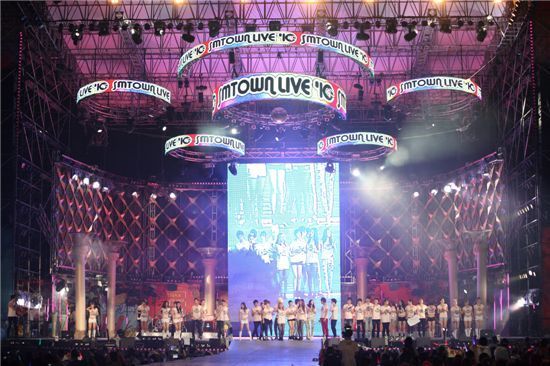 K-pop fans are scary as hell, but one thing’s for sure: they make things happen.

Several months ago, SM Entertainment announced that they would be bringing their SMTown Live concert series to Paris this summer, which sent European K-pop fans into quite a tizzy. Personally, I had believed that the world map at SM Entertainment had consisted of only Asia and the west coast of the United States, but whaddaya know, it looks like they actually know that Europe exists.

What they might not have known, however, was that fans not only from France but from all over Europe would be rushing to see the concert. The tickets to SMTown Paris sold out in fifteen minutes. Dang. You don’t hear those figures unless you’re talking about a big concert in Korea, home of the intense-ist of intense fangirls.

According to several fan accounts, the ticketing process for SMTown Paris was fairly chaotic, and rumors have been circulating that some parties had bought tickets in bulk prior to the public sale date and were selling the tickets on the black market. In short, European fans were not happy that the tickets were so limited in number. And so they did what unhappy K-pop fans do best: they planned a flash mob.

Now granted I think the actual definition of “flash mob” has slowly disintegrated into ambiguity these past few years. Apparently anything can constitute as a ‘flash mob’ as long as you have an enormous amount of people in one place being loud and obnoxious and doing things that will attract attention. The last time I checked, this was called ‘rioting’…but what can you do. Check out some footage below of the ‘flash mob’ held at the Pyramide de Louvres in Paris:

Call it a flash mob, call it a riot, but it certainly got SM’s attention and SM execs are now in talks of planning another concert date for their Paris stop. Doing an overseas concert of such a grand scale is a pretty pricey affair, but when you have thousands of fans from an entire continent willing to pay any price to see their favorite K-pop stars, then you’ve gotta cash in on things.

So good for you, SM, and good for you, Europe. Extra props to Korean Connection for helping to bring SMTown to Europe. Korean Connection is actually a ridiculously organized Hallyu fan organization in Europe; they were also responsible for planning an exclusive SHINee fanmeeting for European fans in Korea. K-pop fans are scary as hell, but when they’re super organized like this, then stuff gets done. It’s proof that you can get a company’s attention through sane, logical discussion and negotiation, rather than being psychotic nutcases. Rest of world, take notes.