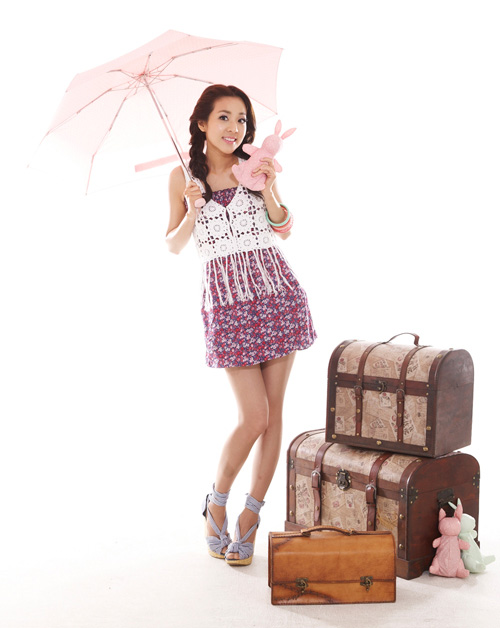 You know you’re famous when you manage to sell 40,000 pink bunny umbrellas in a week.

And yes, I am referring to 2NE1‘s Dara, who has done just that for make-up brand Etude House, which she is endorsing.

Once pictures of the idol holding this very special umbrella were released, the umbrellas began selling like hotcakes, despite being pink and bunny. I just had to emphasize that, because it takes guts to carry a pink bunny umbrella. Especially if you are a male fan living in Korea.

Apparently, Etude House had the genius idea of using Dara’s rabbit moniker as an inspiration for their umbrellas, which customers could snap up at only USD $2 with more than $20 worth of purchases. As if raising sales weren’t enough, the brand revealed that Dara even succeeded in attracting foreign customers to the store in Myungdong. It was said that tourists at the store even purchased the entire series of colours available for the umbrella!

Etude House representatives then expressed their surprise at the unexpectedly positive response. But if you ask me, it’s not that big a surprise, because we all know the power of idol marketing these days. I mean, if you dressed a popular idol group member in an absolutely hideous, bright purple, tropical-print fur coat, there’s every possibility that the coat will become the latest trend in Korea; and I’m not kidding! Technically there’s nothing wrong with this, but apparently the Koreans think it’s okay for idols to advertise EVERYTHING and ANYTHING. Think fried chicken, water purifiers, and theme parks. What do idols have in common with water purifiers anyway?!

I guess we’re just lucky Dara’s selling these sweet lil’ umbrellas, and not some fugly coat, or Koreans are gonna be in deep trouble.