It’s back to Kpop blogging after coming down from a week long vacation high, here’s the 5 Things I loved in Kpop last week while on vacation in Cali for the Korean Musical Festival: KMF 2011 delivers, Ktown’s got the Grindz, Hyori’s Happy Beans, the return of Kpop’s Sexy Divas, and YGE takes on Social Media by the horns.  These are the 5 Things that happened in Kpop last week that I think were a little bit more special than the rest. 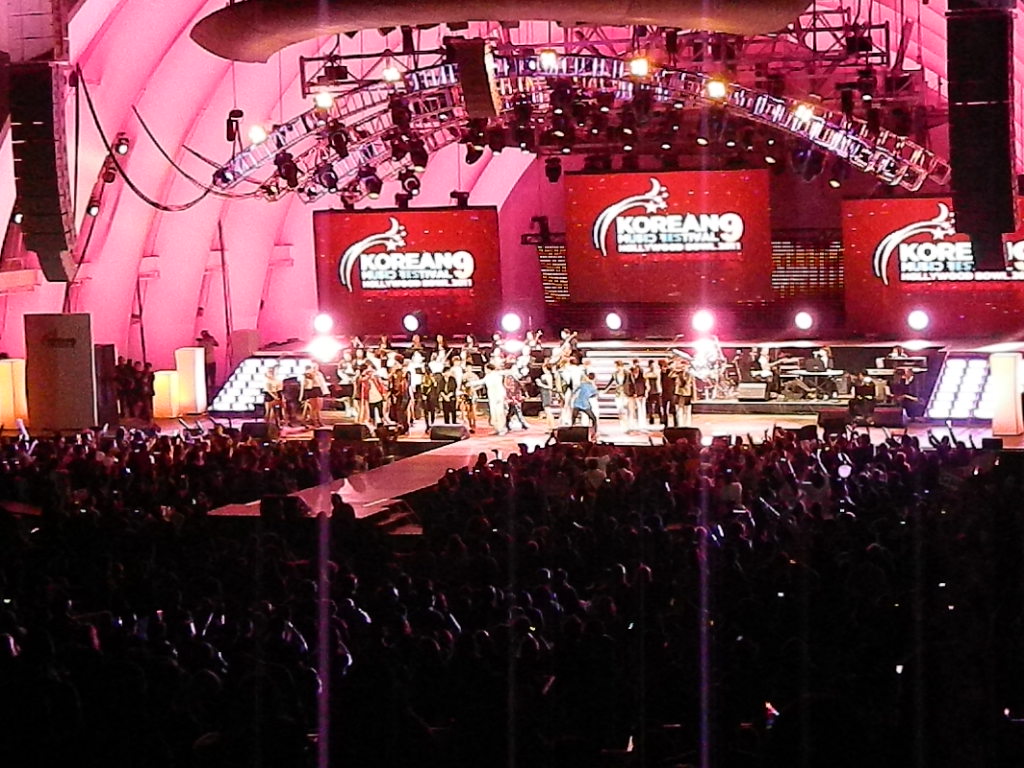 Okay, so noone from the top 3 (SME, YGE, JYPE) came, but it was still fun and an experience to behold- 18,000 Korean music fans of all ages enjoying a concert at the Hollywood Bowl.  The good: Free stuff from all the sponsors- blankets, t-shirts, posters, boom boom sticks, binoculars, bags, etc.  all the free goodies definitely make you feel better after dropping $150 for box seats:  Seeing some of your fave Kpop artists performing, which for international fans is something special; Baek Ji-young was awesome and DJ DOC rocked the house (even the little old halmoni sitting in front of us got up off her seat and was rocking out from the very first song) it was nothing less than I expected from the veteran singers:  There was a lot of fan support for Jay Park which was nice to see and he performed the title song “Abandoned” off of his album Take a Deeper Look live for the first time for KMF fans- check out this vid of the performance courtesy of  Judith118;

So glad that he’s moved on and is doing well; Kim Chang-ryul was great as an MC- watching him dancing in the corner while other artists were performing was almost more fun than watching the artists and apparently I wasn’t the only one who thought so, thanks to youneversee who caught it on video.

The bad:  Traffic-  whoa, crazy!  Although, what else would you expect with 18,000 Korean music fans in one place.  And, I promise I wasn’t one of the fans that orchestrated a successful mission in trapping some of the U-KISS boys on the escalator at the Sheraton- you gotta love, or be very afraid of, fans like that. 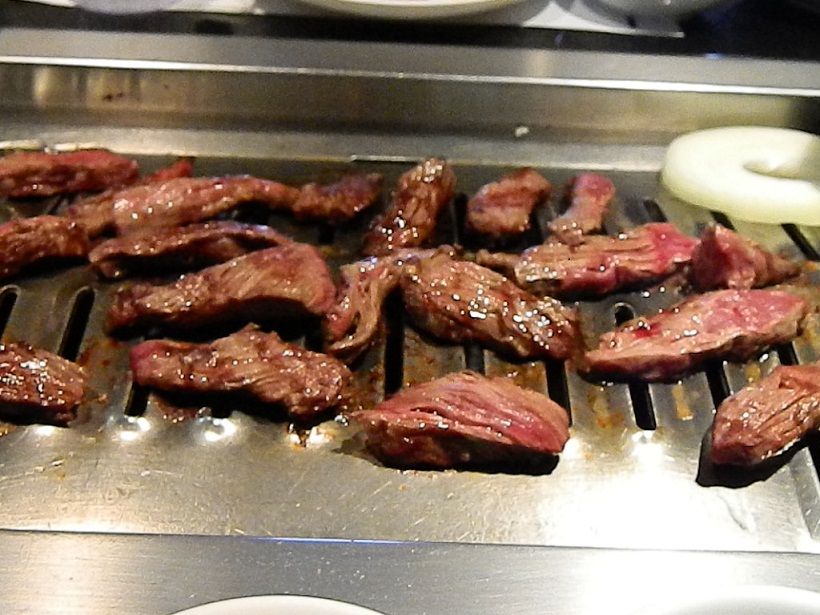 Oh. My. Gawd…  I thought there was pretty good Korean food in Hawaii, but yeah Koreatown in Los Angeles has so much more.  Kimbap, fish jun, dduk bokki, banchan and other goodies from the Galleria on Vermont to cakes and bread from Paris Baguette and the Cake House– it was a Korean food eating bonanza.  My friend Keri Ann, who lives in Cali, took us out along with her brother’s family (hi Alvin, Bonnie, & Arianna) who were also there for the KMF to dinner at Park’s Barbeque.  Hands down the best Korean BBQ I ever had (and apparently I’m not the only one that thinks that with their star filled wall of photographs)  The steamed egg and pancake with rock shrimp and green onions was soo ‘ono too. 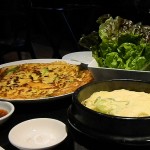 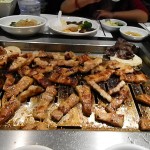 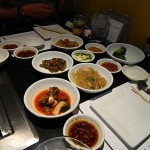 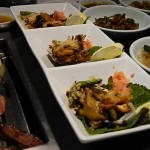 Afterwards we hit Haus Dessert Boutique for dessert and after dinner drinks, I had the patbingsu and green tea which I enjoyed.  Just a tip for you ladies, if you have a cute waiter you might want to consider getting coffee which your waiter hand pours for you at the table and it takes about 10 minutes to do so.  It was good, a tad expensive, but was an enjoyable end to our night. 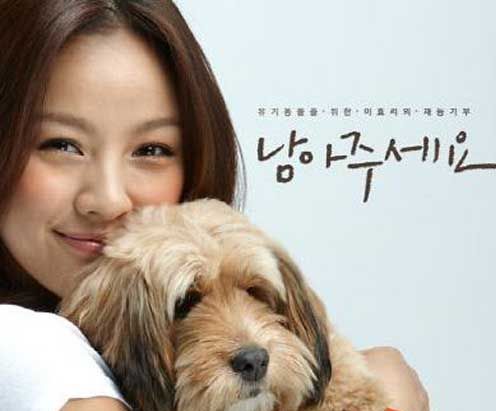 Lee Hyori joined Happy Bean, which is Naver’s celebrity charity project where celebrities can raise funds for the charity of their choice.  Hyori released the digital single “Please Stay Behind” which was composed by Korean singer/songwriter Lucid Fall with all proceeds going to support animal shelters in Korea.  You can find more information about Hyori’s Happy Bean efforts here, on her Naver Blogsite, and on her Happy Bean page.  Hyori is one of my fave Kpoppers and seeing her many kind hearted and charitable efforts just makes me respect her more.  Here’s a great fan made MV for the song with English lyrics, enjoy and support Hyori’s Happy Bean efforts.

After School comes back with Virgin 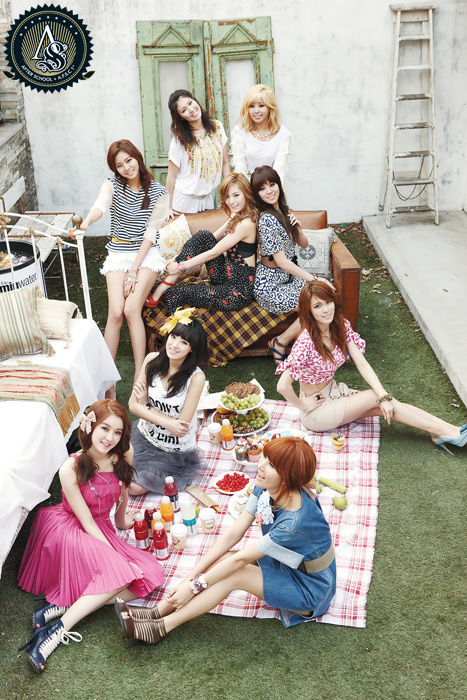 Not loving the album name, but LOVE After School who are one of my fave girl groups.  After School returns to the Kpop scene with one new member Yi-Young, bringing their member count to nine, and their first full length album, Virgin.  The album consists of 12 tracks which includes remakes of three of their previously recorded hits: “Bang,” “Because of You,” and “When I Fall.”  My fave tracks off the album “Play Ur Love,” “Dream,” “My Bell,” and “Leaning Against Time.”  I’m not a fan of the remake of “When I Fall” I think the original, which is one of my fave songs, was much better.  Check out the MV for After School’s first released song off the album, “Shampoo.”

One question and no disrespect to the other members, but why is anyone else rapping if Bekah is there?

YG Enertainment takes on Social Media by the horns 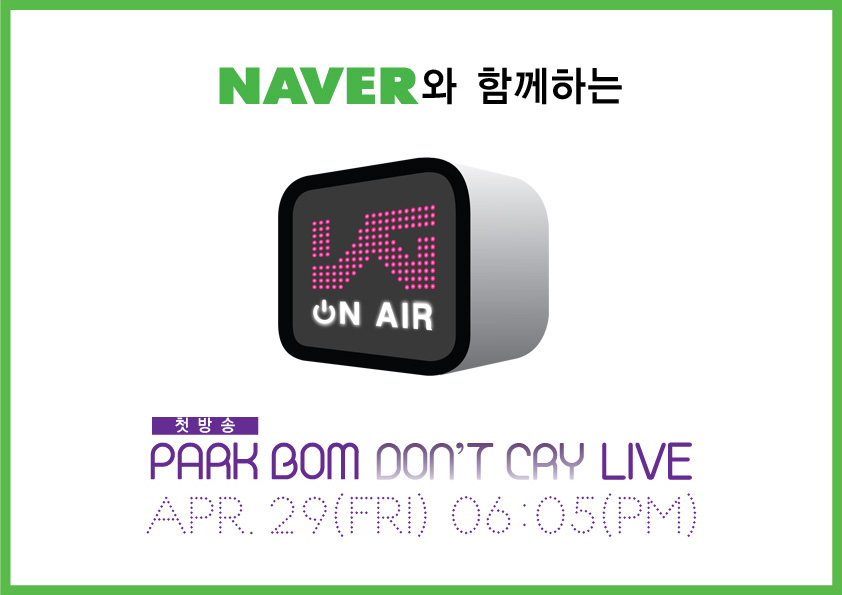 Now, all biases aside this is why I freaking love YG Enterainment.  What do you do when certain popular Korean music shows like to jerk you around *cough, Music Bank, cough*?  Do your own damn show.  On April 28th via YG-Life.com, YGE announced that they will be doing broadcasts of their own produced content called YG On Air in association with portal site Naver.  Through the site they’d release a lot of their own content of their artists, done by them, and by their own rules (although I’m sure they’ll also have to follow some Korean standards).  And for their international fans they’re also uploading the vids onto the various YGE artists’ YouTube channels WITH English subs.  The first broadcast was of 2NE1 talking of their comeback on May 12th with the single “Lonely” and the first live broadcast of Bom singing her latest hit single “Don’t Cry” and an acoustic version of “You and I” for a warm up, check it out.

Now, what’s not to love about that.  It really seems like YG Entertainment listens to the wants of its fans and tries to accomplish them in any way that they can even if it means reinventing the ways that they do things.  They also seem to have grasped the importance of social media in reaching out not only to their fans in Korea, but around the world.  Now, just in case YGE happens to read Seoulbeats, I’m putting in my requests now: Can you please bring the YG Family concert to the US?  Having a show in Hawaii would be great, but I know we’re a bunch of small islands in the middle of the Pacific and I’m not greedy- a date on the West Coast would do.  When is Daesung‘s album coming out?  And could you please try and help What’s Up? get released.  That’s it, Mahalo.

P.s. I also squeezed in the first episode of  Lee Hong-ki’s Jdorama Muscle Girl– I liked it, but I didn’t LOVE it will wait and see how it develops,  And a very Happy Mothers’ Day to all the eomeonis out there!