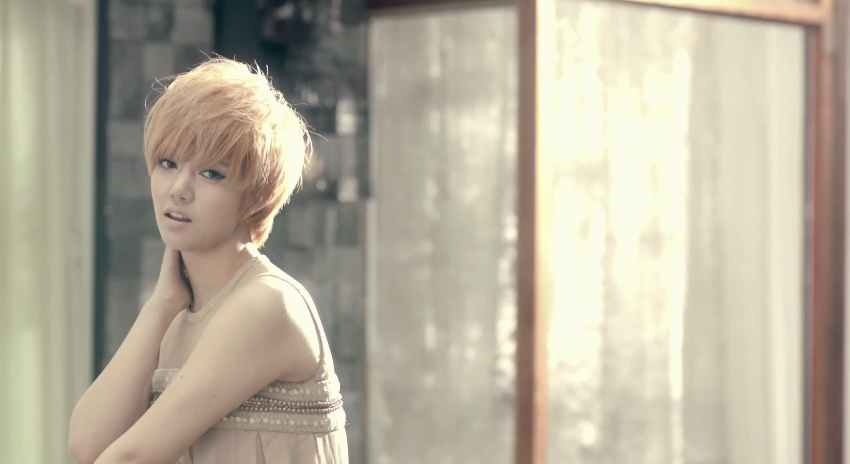 I think it’s easy for K-pop fans to forget that Rainbow is signed to DSP, the mothership of big K-pop names like SS501 and Kara. Of course, it’s not to say that being signed to a major label automatically turns all your music into K-pop gold, but judging from the quality of their latest mini album, So Girls, I think that Rainbow has been severely underrated since their debut. And for good reason – the group debuted in a year where girl groups were popping up left and right and they all sucked. And with a debut song that was as ear-terrorizing as “Gossip Girl” (or “Gosship Girl,” if you will), it was easy to lump Rainbow into the pile of K-pop Girl Group Mediocrity and call it a day.

Maybe it’s because I’ve personally taken a liking to DSP’s sound, but Rainbow has piqued my attention ever since they released “A” and “Mach” – if only because I liked the songs; not necessarily the voices behind them. But after taking a closer look at Rainbow through their comeback performances this past weekend, it seems that this group has a lot more to offer than we might’ve originally anticipated. 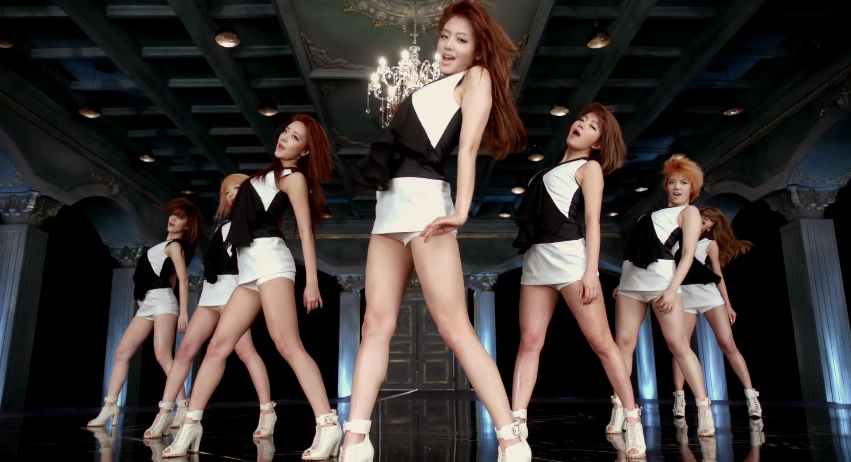 Not much to say here. Almost every large girl group will have a period in time when all the members will be dressed in the same outfit – which is usually a pet peeve of mine. But the whole identical-outfit thing seems a lot less offensive on Rainbow for one primary reason: the members themselves are fairly individualized on multiple levels, contrary to the stereotype that all members of large girl groups are essentially plastic surgerified clones of each other. The individuality of each of the Rainbow members becomes especially apparent when they perform live. Not only do the members all boast rather distinct physical appearances, but their voices and performance styles are all rather unique. You have to squint past the stereotype to really see it, but it’s definitely there. In this regard, I think it’s okay for the members of Rainbow to be dressed in the same outfits for this one promotion. But if it becomes a thing where the members are wearing identical outfits all the time, then no. 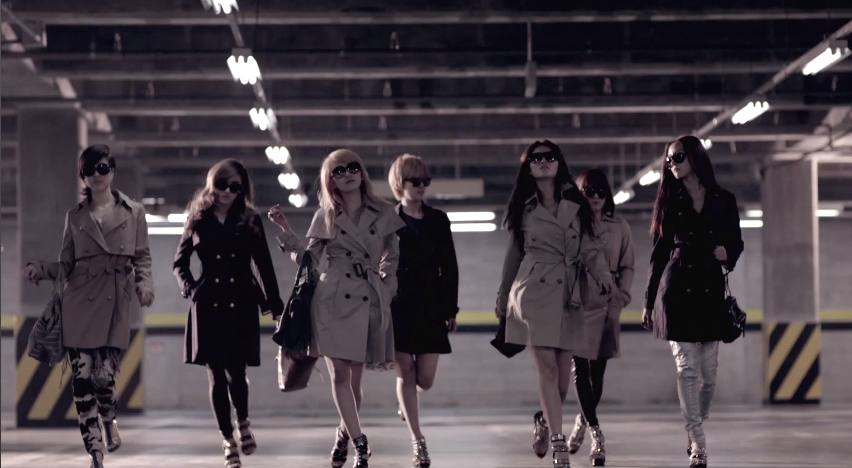 I actually hold no real beef with product placement in music videos, as long as it’s done tastefully. Contrary to common belief, music videos actually take lots and lots of money to produce…so would you rather the production staff get their funding from annoying pop-up ads, or from products being tastefully endorsed within the music video?

That aside, this MV wasn’t anything special. I think they were trying to get somewhere with their color usage in each individual scene, but there was just something about the coloring that struck me as a bit odd. The coloring of each individual scene was okay, but it was the juxtaposition of the different color schemes in each scene that really threw me off. They didn’t clash horribly a la SNSD’s “Hoot” music video, but they just didn’t jive well together.

Definitely could have used a better storyline. Like I said in my post on 4minute’s “Heart to Heart” MV, the ‘retaliation-against-the-cheating-boyfriend’ theme is getting old and tired. But in the case of “To Me,” the plot isn’t just cliched – it also doesn’t fit the song. To be honest, I would’ve been quite okay with a music video composed of the girls staring wistfully into the counter. I would’ve even been okay with that awkward scene where No Eul is demurely posing on the kitchen counter. But with this song, you either go head-on with a big drama style MV or you don’t do a storyline at all.

Obviously I was pretty indifferent about Rainbow’s comeback, considering that their music video was as unimpressive as unimpressive gets. But their two comeback performances this weekend on MuBank and Inkigayo made me think twice.

Trufax: I have not heard another rookie girl group that has displayed as high a level as vocal stability as Rainbow. “To Me” is a difficult song to sing live – it’s four minutes long, and it doesn’t slow down save for a random eight second long instrumental at the halfway point. The tonalities of the verses feature some weird jumps, but each member executes their respective lines with finesse. And during the chorus, Jaekyung belts out her lines without a stray note – which is a lot more difficult than it sounds, because it a) requires her to belt notes that aren’t naturally present in her comfortable chest register, and b) she has to do it repeatedly – and perfectly. It’s a little more forgivable if Ji-sook misses her big note right before the rap break because everyone understands that it’s supposed to be “impressive” and therefore, difficult. But mess up a line in the chorus, and you mess up the song for good.

A lot of people have made comments about the choreography – specifically the ‘chest-pumping’ part at the beginning which has probably become Rainbow’s signature by now considering its prominent usage in both “A” and “To Me.” I don’t think I found the choreography to be as offensively unoriginal as most people – but the truth is that a lot of Rainbow’s songs have used similar beats, and there’s probably someone at DSP who equates certain choreography moves with certain types of beats. End result? Lots and lots of body-part-thrusting on the part of the girls. Which isn’t always the greatest idea, but it does the job pretty effectively. On the whole, the choreography for “To Me” was quite strong and was executed well. Unoriginal? Maybe. But I’d rather see something that’s unoriginal and effective than something that attempts to be groundbreakingly unique but fails miserably in the process. 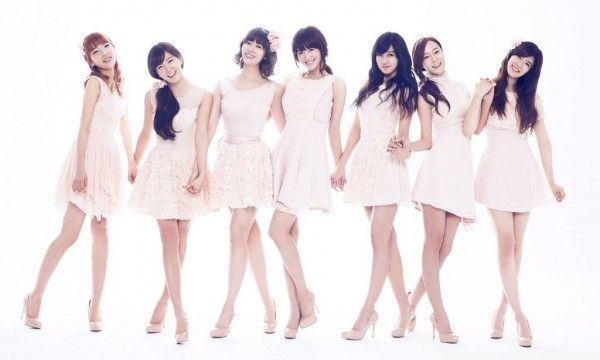 Man, this is diabolical mini-album packaging at its diabolical worstest. To Me features five tracks: the aforementioned “To Me,” the previously released “A” and “Mach,” and two new songs. I thought entertainment companies only repackaged previous singles if they’re releasing a full album, but no. Jeez.

I don’t know why I’m getting vibes of Outkast’s “Hey Ya” from this song – and that sounds really, really bad, but it’s not. “So Cool” is your typical bubblegum pop song in a minor key, which is supposed to make it slightly more badass but the Hilary Duff-esque chorus vocals seem to say otherwise, and the Spice Girls-esque talk-rapping does little to redeem it. It’s not necessarily a forgettable song, but it does sound like an electronified version of “To You” – and I would take “To You” over this song any day.

Confession: I’m a sucker for just about any song with a piano intro. Granted, the piano intro to “To Me” is not the most exciting thing I’ve ever heard, but what’s important is that the piano drives the rest of the song – and in our world of electric supersonic K-pop, it’s rare to see a tonal instrument being the driving force to a song, rather than a corny bass beat.

I haven’t paid a ton of attention to Rainbow until now, but what really strikes me about Rainbow’s sound is that a lot of the girls in the group have voices that are very sweet and classical-sounding, but they’ve also managed to open up their sound and give it enough power to effectively sing a pop song whilst maintaining the sweetness and the integrity of their original voices. Most K-pop voices are categorized into two groups: meaty-sounding soul voices (a la SNSD’s Tiffany and Wonder Girls’ Ye-eun) and light, feminine-sounding, high-pitched voices (a la SNSD’s Jessica and miss A’s Suzy). But many of the voices in Rainbow seem to fall somewhere in between – as they should, because this means that they’re using their voices as they are, rather than stuffing them into a mold.

Could be easily passed for an SNSD song. Not trying to start fan wars; just the truth.

It’s pretty forgettable as far as ballads go, but it’s sweet and not an earsore.

This was first released last October, so I’ll keep it brief. It’s definitely not as vocally demanding as “To Me,” and the chorus is a ton of fun, but not a huge challenge to sing. I personally really like this song simply because the chord progressions are really dramatic and the syncopated beats make this song really dynamic. On the other hand, I know a ton of people who hate this song, so it’s really a personal taste thing.

Once again, this song was released in August, so I won’t say too much. There’s something really offputting about how the verses are executed, but I really like how they used the more milder voices near the beginning of the verse and allowed the ‘stronger’ sounding voices carry the end of the verse. It gives the song shape – which the song needs, considering the amount of tonal variety in here is…well, unimpressive.

Also, I don’t know what it is about this group and their song choruses, but they’re always super catchy and highlight the entire song really well. Heck, even “Gossip Girl” had a catchy-as-hell chorus. The thing about these choruses is that they’re not only catchy as the hook to a song, but they are also structured well and not forced. As in, anything that doesn’t feature excessively repeating words or notes is good with me.

Historically speaking, it usually takes a longer period of time for girl groups to become well-established in the K-pop scene than it does for boy groups. This makes sense, considering how the majority of the K-pop fan demographic is composed of girls and girls tend to be more forgiving of (and more easily impressed at) their favorite boy groups because…well, it’s the same reason why the boys in my high school choir always got the girls. A man who can sing relatively on pitch is instantly hottie material. But girls…they have to prove themselves.

Which sucks, of course, but it sucks even more for Rainbow because even though they’ve finally proved themselves as capable singers and performers, they’re still lost in a swarm of sucky girl groups. To be perfectly honest, there really is nothing special about this group unless you take the time to watch their live performances and take special note of their stability as a group – but who’s gonna actually do that if they don’t have any invested interest in the group to begin with?

I honestly believe that Rainbow has the talent and the versatility to be on the same level as SNSD – and this is coming from a huge SNSD fan, believe it or not. Rainbow has the strength, the talent, and the stability to really make it as a top group – but their circumstances and reputation is what’s keeping them from showing their full potential to the public.