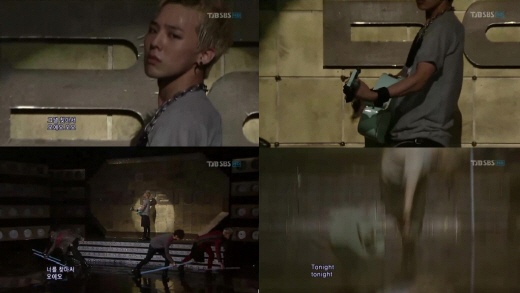 We all thought it was the end of G-dragon’s guitar-smashing…until YG Entertainment announced that the plan of replacing the act with another stunt is officially scrapped!

Yeah, that’s right-G-dragon will be smashing even more guitars (oh god, all that money spent) for future promotions of Big Bang’s title track, Tonight. YG representatives expressed that the boys had been looking forward to presenting a fresh new performance, since showing the same stunt repeatedly might reduce its dramatic effect, but by changing the performance, they would have to make changes to the song and choreography as well. Due to time constraints, they had no choice but to carry on with the guitar-breaking. That’s why G-dragon had gone ahead with the act during the group’s Mnet M-Countdown performance.

IMO, Big Bang doesn’t need to start jumping down from roofs or anything drastic just to make an impact during the performances. I mean, yeah, G-dragon looks pretty awesome with his “The world hates me, I hate the world, this life sucks” emo-rocker look as he smashes the guitar, but whether he does it or not, I think the performance would still rock. It’s not THAT a big deal, because there are other factors that determine the overall wow factor of the stage. Sometimes less is more, you know?