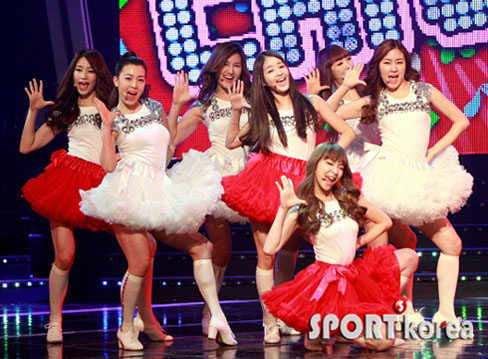 When it comes to uncovering hidden vocal gems among the sea of idols today, MR (music-removed) videos are probably one of your best shots. There are several floating around on Youtube currently, created either by loyal fans who wish to show the world how awesome their idols are, or netizens who are curious to know the truth about a particular singer’s singing ability.

Of course, while an MR video can reveal idols’ true talents, it can also expose their embarrassing lack of skill as well. This is especially true for newly-debuted girl group CHI-CHI (you know, the group aiming to overtake SNSD. Ring any bells yet?)

The rookies have been under heavy criticism from netizens for their recent performance of debut song “Don’t Play Around“. Most of the time, idol groups have pretty rigorous dance routines during their performances, so they have to depend on background music to avoid screwing up the vocal component of the stage. We’re all human, obviously, so people tend to forgive and forget.

But for Chi Chi, netizens have been complaining that the girls were lip-syncing too much,  such that they were basically relying on the pre-recorded track for the whole performance. During the rare instances when a few members did sing, they were extremely off-tune or delivered only half their lines. This led viewers to wonder if the girls were really singers at all.

I pity this group for experiencing such hate when they’ve barely even warmed up the stage, but honestly. A live performance is when, you know, a singer SINGS his/her song LIVE. So if they’re going to play the background music extra-loud and pretend to be singing live, does one still call the performance LIVE?! If the dance routine is so tiring that the members can’t even deliver a single line well, it’s time to tone down the dancing. Because at the end of the day, idols are singers, and singers are supposed to sing, right? If they can’t, what on earth have they been doing during those years of training? Sure, Chi Chi is a rookie group, but IMO, they should have worked harder to blow our minds and showcase their talents during their debut stage.

Maybe I’m just being biased and overly harsh. But seriously, what kind of name is Chi Chi? Isn’t it Spanish slang for um, something else?

Anyway, I’m sure you’re all dying to hear their vocals for yourself, so without further ado, I present to you…