This week’s 5 Things is all about variety, so hold on to your funny bones.  There’s some Dancing happily together, Heroes visiting heroes, IU and K.Will playing, MBLAQ shenanigans, and the Thing that almost broke my heart.  These are the 5 Things that happened in Kpop last week that I think were a little bit more special than the rest.

First up was the latest edition of Happy Together with guests Yoon Eun-hye, Park Han-byul, Sori, K.Will, Jun Hyun-mu, and Park Hwi-soon. The whole episode was pretty funny and there was a lot of chat about Sori dancing sexy to a children’s song, but this clip of the guests having a dance off with a hilarious ending was my fave part of the show.

I can’t believe they did that to the PD and that he didn’t edit the part out. Another fave part was when a couple of them wanted to take on K.Will in the octave race.

A Girl Worth Fighting For

For the last couple of episodes the cast of Heroes was shown visiting an Air Force base to meet with and entertain the cadets. Last week’s episode was the culmination with the idols performing for the troops. The biggest applause from the troops came when IU, T-ara‘s Ji-yeon, and Yoo In-na hit the stage, check it out.

It would appear that the girl that most of those soldiers were willing to fight for was IU. I know she killed it as Pil-sook in Dream High, but wow. It was nice of the show to visit the troops and perform for them while they’re serving their country, but what was really heartwarming was that they brought one cadet’s mother to the show to surprise him after he had mentioned earlier during talent show auditions about missing his mom.

Aaw, it really reminds you of the sacrifice that these young men make as they give two years of their lives to protect their country.

On the last episode of Come To Play IU, Ji-yeon, Luna,Kim Tae-woo, K.Will, and Doo-joon were guests. During one portion of the show, IU and K.Will sat down to serenade everyone to the duet IU released previously with Seulong, “Nagging.”

Another little great performance during the show was when IU, Ji-yeon, and Luna danced together to some of their songs- you can really tell that IU isn’t your average girl group idol, poor thing could barely keep up.

MBLAQ has a pretty hilarious new variety show that follows them around and has a section were they’re questioned while in the bathroom and punished with stink bombs if their anwers aren’t satisfactory. My fave part of the last episode was when the boys played a game, check it out.

Ah, boys will be boys.

The Thing that almost broke my heart

I know I’m not the only one that was looking forward to the last episode of Running Man where Daesung and Jung Yong-hwa were to be the guests, but when the opening sequence where Song Ji-hyo picked up the Running Man members she wanted to be on her team by boat took up 44 minutes of the 75 minute program I was about ready to scream. Not only did the selection take a long time, it wasn’t very funny or entertaining- I really didn’t like it. The only part of this section that I did enjoy was Haha posing with his Jason doll while waiting. 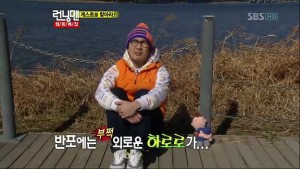 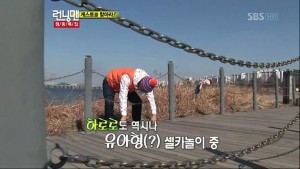 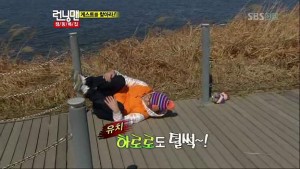 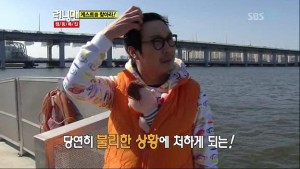 So finally, we get to the main attraction of the show the race to find the guests at the Nanji Campgrounds.  Daesung has a close encounter with Ji-hyo, but Daesung really knows how to dig out.  Thank goodness for the wide angle cameras.

Here’s the big chase which includes scenes of the members that Ji-hyo didn’t pick giving her heat about it until she fell to her knees in apology.

Daesung and Yong-hwa have got to be the two most elusive guests on the show ever. This is Yong-hwa’s third or fourth time on the show and he had always been an elusive opponent, but this might be his best effort yet.  So when this whole big chase scene was still going on with barely anytime left, I realized that there had to be a part two to this, the first ever (I think).  Thank goodness, and I can’t wait to watch episode two of Daesung & Yong-hwa vs. Running Man.

I LOVE Yoo Jae-suk, but I was kind of surprised that I picked all three of his variety shows for three out of the five Things of last week.  Just goes to show that Jae-suk is the man.  So, those were the 5 things that I LOVED in Kpop last week, were they yours?