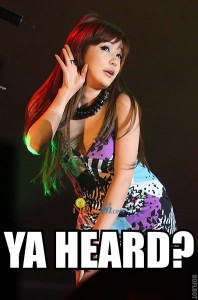 Shy of completing their second year of debut, 2NE1 is going to hit the poseidon of the Asian music market: Japan. CEO of YG Entertainment,Yang Hyun-Suk, recently announced via the official YG site that these baddest females would begin promotions in the land of the rising sun under AVEX from February to March. They will then return to Korea to work on their next Korean album which will hopefully be released in May or June.

Yang Hyun-Suk even addressed the US debut rumors. Though an official date has not been set, they have already recorded ten songs with Will.I.Am. So it’s going  to happen, folks. But as of now, no one knows when.

As far as Japan is concerned, I would be genuinely surprised if 2NE1 didn’t hit the jackpot; Japan seems to like their Korean imports very much and 2NE1, love them or hate them (I’m not a particularly big fan), definitely has a distinct flavor that sets them aside from their predecessors. Plus, under a label like AVEX, which also boasts successful Japanese acts like Ayumi Hamasaki and EXILE, as well as successful Korean acts in Japan like BoA and Tohoshinki, their bound to experience the best management.

As far as the US, I’m still a little very skeptical. Yes, 2NE1 is talented and unique but the same can be argued for all the other kpop acts that have tried their luck at the biggest music market in the entire world. I don’t think it’s a matter of an inefficiency in the language, or a certain musical flavor, or anything in between. The United States has always been able to accept foreign entertainment but that’s the heart of the matter; it is always considered foreign and until a kpop act can establish an identity as an AMERICAN artist, I don’t think debut attempts on the kpop front will be successful. This idea though also presents a conundrum because can a kpop artist establish an American identity and still be kpop?

That being said, can 2NE1 do this? I don’t really know and I don’t think anyone can predict that because I don’t think this is dependent on any factor that we can analyze now. Like I said, I don’t really think it’s a matter of talent, language proficiency, or musical style- which, don’t get me wrong, helps A LOT, but rather, a matter of some mysterical je ne sais quoi. 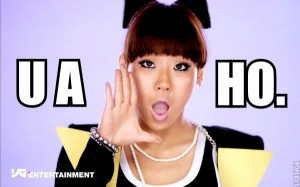 Either way, congratulations to the girls! May you invade iPods everywhere.