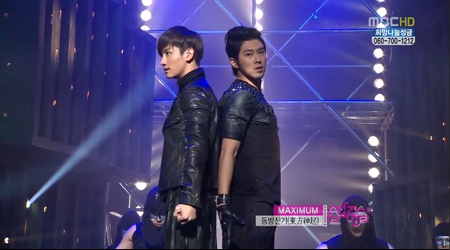 That would be referencing the show’s neon not-found-in-nature lighting, which isn’t a bad change, but between that and the strobe lights I would have liked a disclaimer.

The show is really packed to the brim, including the comebacks, leading to truncated performances and some weird-crazy camera work. Also, was it me or was there less idol groups and more actual singing? I’m inhaling that fresh air as we speak.

In light of the jam-packed line up, a slight change to the recap format – though I’m sure this is convenient for those of you who’d rather get to the vids and skip the commentary. See? Everybody happy!

– The dude from Soul Harmony is totally role playing Axel Rose in the shower. Or Adam Lambert.

– Loud screams for a DBSK mention. For a second I can actually understand some of the fan anger and confusion. It feels weird even for me to refer to them as Dong Bang Shin Ki when more than half the group is gone.

–  Ok, I just have to mention this weird thing that kinda sorta bugs me – rapper/singer songs where the rapper does their rapper thing and the female singer is as stiff as a board. We got some head bobs and interaction from this episode’s talented ladies, but I see that and just want to yell, “now the legs! Don’t forget the arms!”

-F1RST – This all looks oddly familiar – probably because this group debuted this song like 3 months ago but were over -shadowed by the other co-ed group, uh, Co-ed. Any potential on display is completely eradicated by this AWFUL song.

-Between Dal Shabat and Secret I am having retro seizures. Dal Shabat is disturbingly old-school SNSD.

-Piggy Girls : A lot of discussion about this group, on this site and others. I hate and admire the group name at the same time. I see what they were trying to do, but I think they could have formulated something the rolls more easily off the tongue. The song is all right, but girls can sang. Interesting that we have the biggest girl with the biggest voice – it’s meme often used in U.S. media and in performances of African-American musical performances. Just wondering if there was much thought given to that.

-Infinite : I think they are one of the more talented boy groups around…there are just so many of them. Changing a couple of members’ hair colors does not help boys, sorry.

-IU is still insufferably cute. Someone is building a k-drama around that girl as we speak.

-Is it weird that now i kinda want to see Shy Boy : The Musical? They make Broadway shows out of everything else. Oh and also, Secret are totally murdering SNSD in  retro concept execution.

– Homin – Oh, this is sad. You know in a bittersweet way, the guys did fine performance-wise. This wouldn’t be so awkward to see if we weren’t privy to all the ugly SM drama clogging up the news blogs . Thanks social media!

Well, it feels strange saying this, but Music Core, that was a pretty decent show. I actually don’t feel as if I’ve wasted an entire hour of my life. Instead I surrendered myself to that sweet, sweet kpop addiction.

Peace everyone, and enjoy Inkigayo!