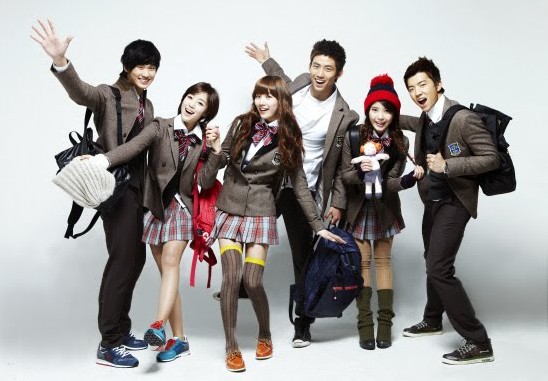 Attention all Dream High Kdrama addicts, I mean fans.  We all know that we were left high and dry this week due to the  Korea-Japan soccer match yesterday, but good news may be on the horizon.  Fans had been wondering what was going to happen for the drama to catch up, would there be three episodes next week or…

The drama was originally scripted to have 16 episodes, this would have made the last episode air on Tuesday, February 22nd.  Due to the delay caused by the soccer game, the last episode is now slated for Monday, February 28th, leaving an empty time slot on Tuesday, March 1st.  Apparently, the show’s producers are in talks with KBS to extend the drama by ONE episode making it 17 episodes long and ending on the 1st.  The talks are still in the preliminary stages, but it is on the table.

Ah, My Princess was my current crack, but I think Dream High just surpassed it last week.   I wasn’t the only one to jump on the Dream High bandwagon though, as Dream High took over as #1 in the Monday/Tuesday drama time slot beating out Queen of Reversals and Athena.  I’m enjoying Kim Soo-hyun‘s portrayal of Sam-dong- what a cutie, and the adorable WooU couple of Wooyoung and IU.  We really need more WooU which I think is coming up in episode 8.  Dear writer, please don’t ruin it for me and make Jason act like a total tool to Pil-sook or I may have to spam your cyworld or something (just kidding, kind-of). So fellow fans, cross your fingers and your toes, give your offerings at the altar of My Name is Kim Sam Soon, and let’s all hope for an extra episode that’ll fulfill all our dreams of kdrama warmth and fuzziness.