And OMG I DIE. 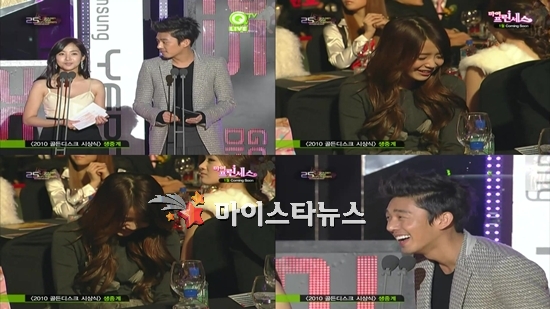 The ribbing also affected super cute singer IU as it was her crush on Yoo Ah In that was the butt of the joke. While promoting her new album last week, IU admitted on the KBS show “Hello” that her ideal man (and mine) was none other than our favorite SKKS bad boy.

Min Young chose to bring up IU’s little crush in front of the packed room of KPOP’s finest making poor IU blush in the audience and Yoo Ah In to say, “IU… I love you… I love you too”.

The cuteness starts at about the 1:20 mark, but since I love me some Ah In, I watched the whole video:

ADORABLE. And probably the most excitement at the awards show, imo.