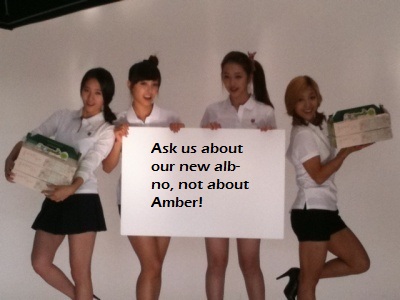 The problem with technical issues on blogs (and if you are virtual web repellent such as myself, you will have technical issues) is that when you finally gather your laptop from the other side of the broken window and get things back up and going, you miss all the good stuff.

I’ve been following this little f(x) saga with interest for a while now, ever since Amber “became sick” and the arguably most popular member of the group was sidelined while the others continued to promote without her. Ever since then, fans have been playing a California-based game of Where’s Amber? hoping to catch the boyish-looking members unawares – and find out exactly what the hell is going on.

SM  took a break from issuing subpoenas and released a clear, yet unsatisfying statement:

On the 15th of November, a representative from SM Entertainment told Star News, “f(x) coming back as a 4 member girlgroup this month is all false. Right as of now, nothing has been determined within our company yet.”
“Amber has finished her official activities and is currently in the United States.”
“Amber resigning as a part of f(x) is just ridiculous. No such thing will happen.”

Of course to give the corporation credit, SME has already answered questions about Amber in the past, saying “Amber naturally had a weak ankle. Her condition got worse during f(x)’s promotional activities.” and “Amber withdrawing from the group is all false.”

I can believe that – the way they run those idols like work-horses I’m not surprised there are injuries afoot. But something about the situation just seems a little…off. I sincerely hope it’s simple gossip and chatter because the last thing this industry needs is another scandal on its hands.