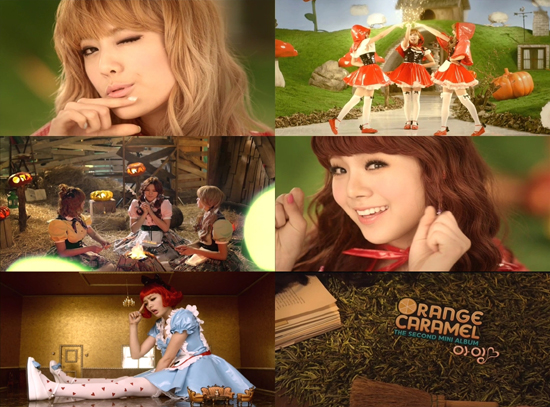 Pledis Entertainment released After School sub-unit Orange Caramel’s second mini album today.   The group made up members of Raina, Nana, and Lizzy have 4 songs on their newest release:  the title track “A~ing,” the upbeat dance track “One Love,” the slow love ballad solo by Raina “Still,” and a cover of M2M‘s “The Day You Went Away.”  I’m a fan of After School, Orange Caramel- not so much.  I have to say though, that if I overlook the obviously pedobaittastic  tone of “A~ing,” which I actually like more than their first hit “Magic Girl” the mini album was quite good.

My favorite track would have to be the cover of  “The Day You Went Away.”  I loved the guitar, and the girls’ voices sounded full and harmonious in the vocals.  On Raina’s solo “Still” there’s some beautiful piano playing and the strength and nice timbre of her voice really shines.  The more upbeat “One Love” brings a little diversity to the album and is a good dance track.  The title track “A~ing” is the only track on the album that I’m not feeling totally,  it is a better song in my opinion than “Magic Girl,” but is still a little too sugar-coated with sexual undertones for me.  I think that Kpop companies have finally heard fans’ cries of no more auto tune, or at least not so much.

Soon after the mini album was released, the MV for “A~ing” was also released.  It has a fairy tale concept with glimpses of Alice in Wonderland, Snow White, The Wizard of Oz, and Red Riding Hood themes in it.  Check it out.

If not for the kinky cosplay lolita outfits, I would’ve actually liked the video much more because of it being something different than what is currently out there in Kpop land (even with the aegyoness).  The different sets on the video were great, although some of the CG work was too obvious.  I just really don’t like the sexy/innocent conflicting themes, was I the only one that thought it was a little disturbing seeing the little girl dressed up in the same kind of vinyl red riding hood get-up as Orange Caramel at the end?  So, thumbs up for the album and  no thumb (neither up or down) for the MV.