Today’s episode of Music Core is suspiciously…full? It’s the only way I can describe it. With all the extra-special activities occurring in Seoul this week, its almost as if the PDs are transferring some of the responsibility to this show to shoulder. Chug on, little train engine. Chug on.

It does seem  that with the reappearance of Music Core performaners we haven’t seen in a while (2NE1, Oh, Wonbin [Miryo!], GP Basic, December) it’s like a big old reunion masquerading as an overarching promotional vehicle for the Hallyu wave. Or I’m just trying to make this show important for once. I tried. 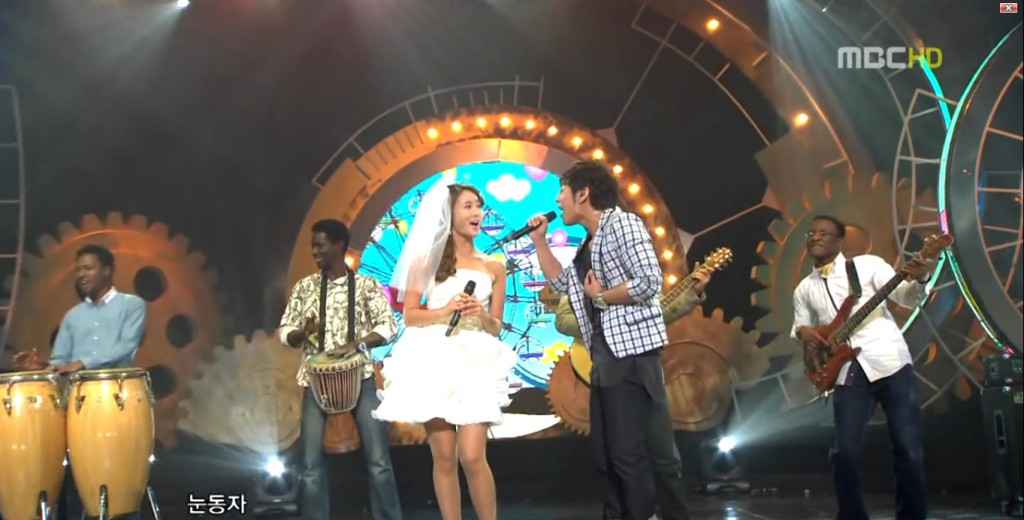 Are those brown people I see on stage?!!  There is nothing I like more than some relaxing reggae, and some happy dudes beating the bongos. Woo Joo and Kim Miyeon sound pretty good too. Get on the bus!

Annyeonghaseyo! Everyone looks so – understated today. I feel like I’m in opposite land.

Some more underage antics from GP Basic – a catchier, poppier song this time around – they are actually getting some cheering from the audience. But, I’m kind of wishing for the auto tune back.

MIRYO is Back! Oh, and she’s performing with Oh Won Bin. But man Miryo is gangsta, when is she gonna cut an album? Isn’t there another chick in Brown Eyed Girls? Oh well. MIRYO!

Double duty from Rainbow today…hope those two songs are a subtle way of saying “Goodbye Stage.”  I admit, their songs were MUCH improved this time around.

Hmm, still screaming. I think the audience is just excited to be in the mix today. I admit, if I was LIVE! at Music Core, I would be screaming too. For different reasons.

Aw, Girl’s Day, my new KARA. Their song is really appropriate for the subtle Clocks, Everywhere! stage set up.

Speaking of KARA, they’re back! Next week! Heh, never afraid to go to toe to toe with those Soshi bishes. Though I’m not sold on ‘Jumping’ this time around.

I know people are tired of me mentioning Lady Gaga whenever Co-Ed performs but whatever. They’re performing it, so I’m going to mention it. I just think that song is wasted on such cutesy outfits – if you’re going to give me diabetes, at least don’t have me thinking of Beyonce (or Glee) while doing so.

Supreme Team are cooler than me. That is all. Well, their backup singers are cool too – no idea why I have a sudden fondness for them, but there you go.

VNT are so….90’s. But that’s part of why I like them. Bonus: Minho DJinghahahaha! No, he looks cute.

No more 2AM depression jokes, I promise. But during the most depressing months of the year, can we move a little more towards “uplifting” and not “soul-crushing?” Ah, 2AM.

The fun thing with Outsider is, when you listen to him, you’re not likely to know whether he’s speaking Korean or English at any given time!

2NE1 are also very sad. But Minzy’s pirate hat is awesome. And this song is my favorite off of their entire album. I also love that there are leaves everywhere, let’s you know it’s autumn right? I think I’ve given 2NE1 enough superlatives to redeem myself, don’t you? But on a (semi- because Minzy’s hat is awesome) serious note, I don’t like CL’s voice as much as I thought I would.

And the winner is…….SNSD! Oh, hah I forgot. Well, they win anyways, in a sense. As far as ‘Hoot’ goes, these outfits are probably the nicest so far, though they couldn’t keep those legs covered up for long I see. It always kills me how there is nary a male peep from the audience the entire show, but we get a full baritone chorus for Soshi time.

Whelp, that is it for me – time to hit the old dusty trail. Thanks to all the readers who bother reading recaps of a show they have already watched, and don’t be afraid to discuss! Also, Youtube uploaders, I salute you. May your videos have a long(er) shelf life this time around.