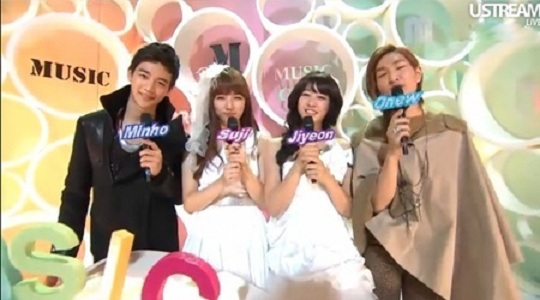 Ahhh, puffs of breath in the crisp cool air; orange and yellow leaves brushing the ground; birds flying south, bears lost in slumber.  It is a new season, a season of changes, changes that happen to include our dear Music Core. After utilizing every known kpop star in the free world (and probably your local postman) we finally have (semi?) permanent hosts. SHINee’s Onew and Minho, Miss A’s Suzy and T-ara’s Jiyeon were all drafted for the task of hosting the only kpop music show that gives us no incentive to watch it. We salute this quartet in light of the long Saturdays ahead.Godspeed, all of you, and may you return with your careers intact.

It would have been nice if they had gotten a more exciting introduction, to entertain us at least. What am I talking about,  that would be asking too much of this show.

We have some rave-inspired set pieces this week, and Chae Yeon in an overcoat. Gotta cover those boobs, you know – the morality of South Korea’s youth is at stake.

FT Island’s promotions end with ‘Love Love Love’ The Remix – which is basically the song with a harder edge and more electric guitars piped in. Beforehand of course, none of that silly “live band” nonsense.

THIS SONG IS STUCK IN MY HEAD. Dear god.  I was a little unsure of Miss A with the discount dance-hall thing, but I gave in. I can’t even explain why. Their vocals sound a little weak – though I don’t know if it’s the girls or the show’s sound system, because judging by the random shot of a backstage corridor that sneaked in, some of the crew have completely checked out until SNSD’s performance.

I MUST PERFORM THIS ROUTINE BEFORE I DIE.

Tonight I’m not takin’ no calls,
‘Cause I’ll be dancin’.

And okay, yeah maybe I am a little put out because this is another song (Narsha) I won’t be able to pronounce (or spell) easily. At least I can read the non-nonsensical English!

Yay! The slow song was sweet. but glad to see Matrix SE7EN back with the dance songs, especially ‘Better Together’ whose melody I prefer over the other two. But c’mon, no point performing ‘Digital Bounce’ without TOP.

Angst, sorrow, tears – it’s time for 2AM everybody! I know they are JYP’s “ballad group” but damn, I would fall into a depression singing those songs every other day. And they have nice non emo-ballad songs, because they are on the mini-album, I have heard them and they are good. Jokwon needs to not fake cry again, ever. My tiny little heart can’t take it.

P.S., Jokwon can keep that comb-over. Boy needs a separate stage just for his hair.

Now for the other ‘Breathe’, my less favorite ‘Breathe,’ but likely the more popular one since it’s sung by guys. You know what would be interesting? Having Miss A and BEAST switch songs for a day, like a Freaky Friday type of thing. A MAMA special stage, anyone?

Now the time is 2PM – the hottest part of the day – but honestly the time when I’m sleepiest. This new song isn’t hitting any levels with me; it sounds a bit…generic. Aw, but the running-in-place dance move makes me giggle like a school girl. Admit it. And the Super Serious faces just make it funnier.

I like ‘Hello.’ But I was distracted during this song for two reasons: Onew’s latest in homeless man chic – and the anticipation that some crazy fan girl would bum rush the stage, lasso up JongHyun and brand a big old “MINE” on his butt cheek. It sounds ridiculous now, but you know this idea has run through somebody’s head at one point.

Soshi time! I actually kinda-sorta like ‘Hoot.’ It’s better than ‘Oh!’ and ‘Run Devil Run’ in my book. But ‘Best Friend’ is disturbingly reminiscent of old-school SNSD and I thought we were moving forward with the concepts ladies? I see why they might have picked it for the song contrast, but I was grinding my teeth for that one.

‘Hoot’ on the other hand, still seems understated for the girls somehow – I can’t put my finger on why. But those wigs! My eyes! Poor Taeyeon. In the (completely fan made-up) retro concept battle between SNSD and Wonder Girls, I’m gonna have to give it to the WG on this one. Hmm, if the Wonder Girls had a song out right now, I’d suggest these groups switch….

Well, I hope you guys enjoyed the show, I have  a rally to go to and our little kpoppers have to do this all again tomorrow; at least someone will get a trophy this time.

Thanks as always to the dedicated Youtubers who upload the videos for however long MBC lets them!