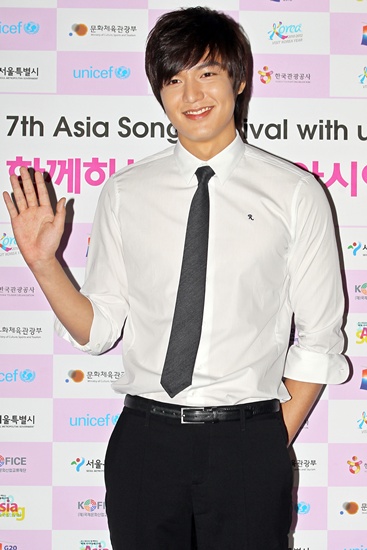 Again.  For a whole year after the ending of his breakout lead performance as Gu Jun-pyo in Boys Over Flowers, Lee Min-ho was flooded with CF offers and personal appearance requests.  He became one of Korea’s most sought after spokespersons, or what they call a ‘blue chip’ in their marketing circles.  After his appearance as an architect in the drama Personal Preference, different types of companies (like those in furniture and electronics) came calling for his services.  Now, after it has been confirmed that he will take the lead in the Korean remake of the Japanese manga City Hunter his agency’s phone is once again ringing off the hook.

The story of City Hunter revolves around a playboy type that is actually a crime fighting hero.  The original manga was written by Hojo Tsukasa in the 1980s and this dramatization will be the first time the story has been retold in 13 years.  Other attempts at dramatizing the manga occurred previously, but they all failed due to the demands of the mangaka (Tsukasa) who demanded perfection from any adaptations.

The story sounds promising and it could be another potential hit for Min-ho.  I’m thinking that’s what advertisers are thinking too, so they want in on the jackpot now.