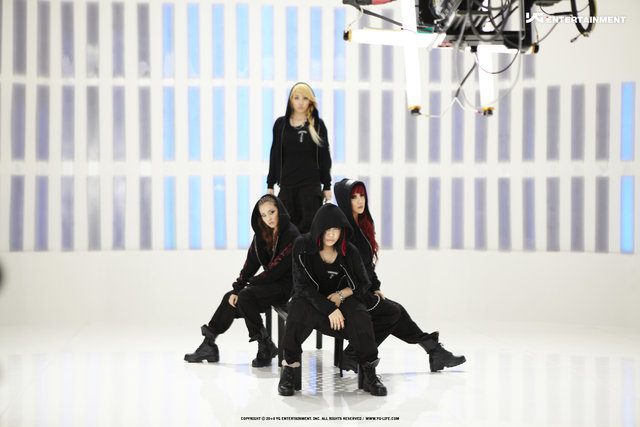 Aaaand they’re back! I have glued to my computer for the last three hours trying to get the first listen of this album, and I’ve finally found some Youtube videos of the tracks from 2NE1’s latest release, To Anyone, with decent audio quality. A large fraction of k-pop fandom has been waiting for this release since it was announced in back in the spring – many expectantly, others not so much. Now that it’s finally out, let’s have a listen, shall we?

I am a huge fan of 2NE1. These girls bring a sense of style and strength to the k-pop industry that I find really refreshing, mainly in that they don’t depend on showing skin and acting all cutesy in order to sell their records – in a word, they’re FIERCE. I find it really interesting that k-pop fandom seems to be divided on these girls. A lot of people think they’re revolutionizing the industry, others are annoyed at the hype. I think the dichotomy itself is interesting, and it begs the question – is 2NE1 really all that? Or is the whole issue simply a fight between fiercely loyal 2NE1 fans and antis (who are likely SONES)?

Here are some facts to consider: they had the most successful girl group debut of 2009, winning more awards and topping more charts with their first two singles than any girl group of the last decade has been able to do with their first release. This album, one of the most highly anticipated albums of 2010, sold 120,000 in preorders – i.e. they sold almost as many albums before the release as Katy Perry did in her first week. Money talks, and it’s telling me that these girls are big, they’re talented, and they give the fans what they want.
YG has always made itself out to be the rebel entertainment company in k-pop, mainly through their dedication to releasing R&B/hip-hop influenced tracks despite industry trends towards bubblegum and electropop. Their music definitely stands out from the pack – just take Taeyang’s mellow “I Need a Girl”, or Se7en’s electrified Digital Bounce. 2NE1’s new material preserves YG’s reputation, as the songs on the album manage to sound like they belong in 2010 without sounding like every other track that’s been released this year. What also stands out to me is how they managed to fit many different sounds onto this album. The mellow “It Hurts (Slow)” is a [great] R&B ballad, and yet it’s sitting next to “Clap Your Hands, ” a pretty standard hip-hop track, “Can’t Nobody” which is a dance track reminiscent of U-Kiss’s material (and I mean that in a very good way), and “Go Away” a great electropop track which I think will be the runaway hit from this album. Despite this, we don’t doubt that this is all authentic 2NE1 material, and that it captures the essence of what this group is all about.
When it boils down to it, though, they’re still making pop music. It can’t be too revolutionary or else people won’t listen to it. In an industry where instant success isn’t just the goal, it’s the standard, they can only deviate from the norm so much. However, their uniqueness in an industry filled with cookie cutter girl groups seems hard to deny. While I don’t think the album is game-changing, it is explosive, filled with fast beats, improved vocals and that trademark 2NE1 swagger k-pop’s been missing in 2010.

REPUBLISHED WITH PERMISSION OF MELLOYEL