Hyuna Is Bold with "Lip and Hip" 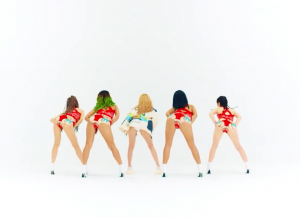 In case you hate the word “panties,” this is a warning because Hyuna is all about the panties in her latest MV and they play a significant role. Hyuna proves she’s still a force to be reckoned with, as she ends the year with her third comeback with a catchy and feel-good hip-hop song titled “Lip & Hip.” As usual, Hyuna is confident and pushes boundaries when it comes to her sexuality. She doesn’t shy away from various scenes of her in her underwear or provocative dance-moves that emphasize her buttocks. However, she’s isn’t all about creating shock value, and reminds us why she’s still the star of Cube with an encouraging song about confidence with one’s body.

The MV follows a simple plot involving two versions of Hyuna: bold Hyuna and timid Hyuna. The shy Hyuna is curious as she’s in her room looking at videos of people kissing, staring at her breasts, trying on different clothes, and looking in the mirror longing for something more as the lyrics in the song play out her emotions:

I want to dress up specially today
I don’t really feel like myself Yeah
A little more hot, my mind is more bold
It feels like things are working out for me today 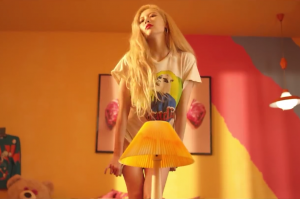 These more innocent scenes of Hyuna contrast with the bold Hyuna who gives into her desires as she’s shown in various provocative outfits and is seen several times in her panties. We jump back and forth from images of both versions of Hyuna as the song expresses wanting to tempt someone with their lips and hips. Eventually, the sexy Hyuna drops her panties into her doppelganger’s room as the camera zooms in to show the words written on them in gold “Pink Wishes of Sweet Dreams.” The timid Hyuna then pulls down her own panties to slide them on as her room darkens. Suddenly, she’s transformed and is seen partying and dancing with both the female and male dancers in her room. This moment is significant as the panties symbolize her inner desire to be more confident.

The MV has a mostly yellow and red color scheme with lots of sexual innuendos like Hyuna holding up a fork with two meatballs speared on. Her dancing is mostly hip thrusts and butt shakes as it switches from being in the center of male and female dancers who are both wearing some version of teddy bear pajamas. There are also splashes of colors like orange and hot pink with artwork in the background of lips, clouds, and fruits that tie into the surreal imagery. Much like her panties stated, she’s in a dream-like world where she can be herself without hesitation.

Hyuna sports blonde locks with bright eye shadow and lips that match the colors in her MV. She has several scenes with panties including one when they’re changing various patterns of fruits and scribbles, while her quieter, seemingly innocent alter-ego is typically seen in a basic skirt and blouse outfit with simpler makeup. This version of Hyuna is unsure but still curious to discover more about her body and self as she realizes she’s feeling different that day:

Sometimes I’m sexy, my walking is more confident
It feels like things are working out for me today 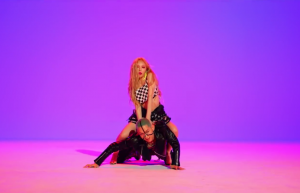 One of the more daring scenes is one of her singing about feeling assertive while in a dominatrix-style position riding over a man dressed in black latex. This is also a song about feeling in control and wanting to bring that out to her potential lover, and it expresses how she’s feeling more assured to show that stronger side of her.

The song carries electronic sounds mixed in with her typical hip-hop beats. During the bridge, Hyuna sings and drops her iconic squeaky voice for a more natural tone which is reminiscence of her sound from her Troublemaker days. Because of this, it almost sounds as if two different girls are singing on the track which parallels to the two different Hyunas in the MV. It builds up to the repetitive chorus regarding the temptation of her lips and hips. 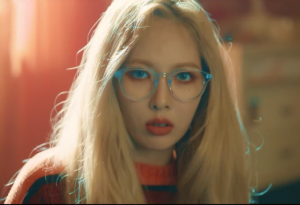 The video concludes with Hyuna waking up confused as if it were all a dream, and goes back to her quiet and nerdy outfit wearing glasses, sporting braces, a T-shirt, and jeans. As she walks out the camera pans to her ripped jeans showing her panties suggesting she may look shy but she’s still bold underneath.  Even if Hyuna is covered up, she’s still a strong and confident woman showing that she’s more than just her clothes. This dance track is a great way to end the year as it shows that Hyuna isn’t backing down from her sex symbol image and is instead embracing it to empower women when it comes to their own sexuality.
(Youtube, Lyrics via Kpopviral, Images via Cube Entertainment)