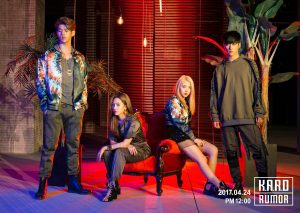 One thing we have learned from K-Pop: there’s more than one way to make a debut. While most groups take the traditional route of introductory videos, maybe a pre-debut show, and then teasers leading up to their debut single, video, and album, there are times when we get a different approach. There is the reality show way, where groups like Winner and iKon came into existence. Some groups introduce themselves through a webtoon a la B1A4. With K.A.R.D, they’ve thrown themselves straight into the fray, using their music “projects” as a way to get to know them before their official debut. This time around, they’ve released their final project entitled “Rumor”.

K.A.R.D got everyone’s attention last year when they first came on the scene with “Oh Na Na,” and proved that co-ed groups were sorely needed in the market. They continued their momentum with “Don’t Recall,” which solidified that they were not a gimmick, but in fact a group with a growing amount of potential. “Rumor” builds on “Oh Na Na” and “Don’t Recall,” both stylistically and lyrically.

If we look at all of K.A.R.D’s video’s on visuals alone there are already similarities to point out. There’s a lot of dark lighting that is used as an attempt to make things look more mysterious than they are. Then there’s the lack of focus, so to speak. There are wonderful group shots of the members dancing together and interacting, that are then interspersed with seemingly unconnected individual shots. Now, “Don’t Recall” did have a theory about the “story” of the MV, but I’m a stickler for one or the other when it comes to acting or performance. It would be great 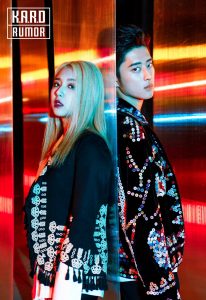 to see the members commit to a full blown story driven MV though I do enjoy the dance versions as well. If one aspect outweighed the other in the video, I wouldn’t bring it up, but as it all seemed pretty balanced in “Rumor,” the overall effect left me feeling as though something was lacking.

“Rumor” does build on some of the groundwork that the previous projects laid. The island/reggae sound is more prevalent in the track, a feature which has been present in all three songs but is definitely the backbone of “Rumor.” Furthermore, if we take a look at the lyrics, we can see how much story progression has happened between “Rumor” and “Don’t Recall.”

The story of “Rumor” is that, after the break up of “Don’t Recall,” the now single members are suddenly hearing rumors that their ex is seeing someone new. Of course, this doesn’t really sit well, because after a break-up neither party wants the other side to move on, especially not quickly. What’s interesting is the dynamic of the male and female viewpoints. B.M and J.seph‘s verses concentrate on “I heard this rumor and it hurt me and damn, how could you do this to me” versus Somin and Jiwoo saying “I heard it and I’m not gonna believe it because there’s no way you moved on from me already.”

Generally when break-ups happen one side is content and the other side isn’t happy at all. Here, there’s unhappiness all-around. Is there regret, perhaps, over everything that has happened? As the song progresses, Somin asks outright if the rumors are true and B.M. responds “It’s all a lie, I’ve never done that/Even though I try so hard/I can’t forget these feelings.” The back and forth help sell the complete story and range of emotions–from disbelief to heartache to despair, the conversation is really elevated by the male and female views being 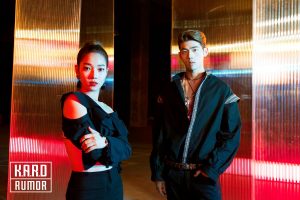 K.A.R.D seems to be doing well for themselves as it is, with Toronto Kpop Con on the way, plus their own upcoming tour. Their official debut doesn’t seem too far off with the reactions they’ve been receiving. But I do want more from them. I want them to fully commit to their sound. Like mentioned before, they’ve brought some reggae vibes to their all their songs so far, but I want to see some dancehall incorporated into the choreography. Instead of just borrowing a sound, make it a complete concept and tie up the loose ends. I want to see them push the co-ed aspect of their group even further because it’s a segment of K-pop that hasn’t had much success. Overall, I want to see them continue to do well.