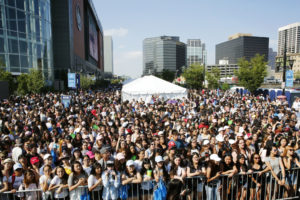 KCON 2016 NY Presented by Totoya held at the Prudential Center in Newark, NJ definitely proved to be a festival to celebrate all things Hallyu and day two was no different from day one.

The following can be said about most, if not all, conventions: Saturday is normally and without a doubt the most important day. The crowd is bigger, the lines at vendor booths are longer, and people are waiting early in line for general admission. And we’re not talking 10am when the convention starts. There was people lined up as early as 8:30am.

Fast forward to 7pm and it is concert time. Saturday’s line up consisted of Mamamoo, Eric Nam, Day6, and BTS. 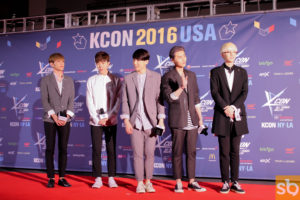 BTS was the headliner for the concert (and pretty much all of KCON was about BTS) and any time their name was mentioned, the crowd went wild making it obvious who they were mostly there for.

But the crowd was not biased. All the artists received a large amount of shouting, applauding, cheering, and not many people sitting, if any, during their sets.

The opening of the concert began with Jun Sung-ahn. While many now know him as BgA’s maknae, he’s known for his violin and dance covers of K-pop songs. He performed one live song and then BTS’s “Save Me”, complete with dance moves from the song’s music video. He was definitely a good artist to get the crowd excited.

Ailee and BTS’s Rap Monster returned to MC another night of the concert. Unlike day one, there was less scripted lines and the conversation between the both of them and the crowd seemed more natural.

Mamamoo was the first act to grace the stage with their jazzy vocals and dominating stage presence. The set list composed of “You’re the Best”, “Mr. Ambiguous”, “Taller than You”, “Piano Man,” and “Um Oh Ah Yeh”. These girls know how to interact with and move a crowd. To be added to a Saturday line up was a plus because they were definitely a fan favorite that night.

Even though Hwasa owned the stage, I couldn’t keep my eyes off Solar. Visually, she was stunning (still is), but vocally? She threw down some notes and I felt like I almost forgot to breathe.

And I’ll admit, I may not don a radish light stick any time soon, but I think I’m intrigued enough now to listen to their music more actively.  As per the mid-year review, I did in fact listen to their latest album, but it was my second introduction to them, the first being “Ahh Oop!” with eSNa.

On the calmer side of the night, Eric Nam showed up with a bouquet of roses to hand out which was in sync with his intro video. While the crowd missed out on “Ohh Ohh”, which he didn’t realize was so popular, Eric was awesome enough to sample an acapella version of the song.

Despite the lack of “Ohh Ohh”, Eric performed “Good For You”, “I’m Okay”, “Heaven’s Door” and “Into You.” Most artists don’t tend to perform songs that are too recent for the lack of fan engagement, but he didn’t care. Before taking the crowd away with “Into You”, he told the crowd that since he’s a solo singer, he has no backup dancers. Because of that, he needed everyone to dance. Even though many may peg Eric Nam as a ballad singer, he definitely has a charismatic way with the crowd. And if you’re not familiar with Mr. Nam, then that part of his personality will definitely sneak up on you and sweep you off your feet.

After a show of Rap Monster’s aegyo through Ailee’s push — which he was confused as to how the crowd knew that word — Day6 set up to take the Prudential Center by storm. I say this because Day6 isn’t like other K-pop acts, they’re strictly a band that pretty much promotes on their own. They don’t have much help from JYPE outside of being a safety net, so for them to come to KCON was great way to introduce them to new fans and give existing fans a chance to shower them with love.

Day6’s set list included of “Letting Go”, “Congratulations”, and “Freely”. Surprisingly, on KCON’s list of the artist’s song stash playlist, their debut song, “Congratulations”, didn’t make the cut — which personally is one of their best songs as a group. Day6 probably had one of the best setlists, performing their most enjoyable songs.

Having the boys on stage, it was cover time. Like the previous night of Seventeen’s cover of Super Junior’s “Sorry Sorry,” Day6 led the crowd into some cover songs by performing CN Blue’s “I’m a Loner” and “Lies” by Big Bang. It definitely took the audience a moment to take note of the latter song. While the group stayed true to CN Blue, they made “Lies” their own by their musical rearrangement. Even though they played a small intro of the song, the crowd didn’t become aware of what song they were covering until Jae started singing “I’m so sorry, but I love you…” Then, the crowd went berserk.

Riding that wave, the band started to cover Wonder Girls’s “Nobody”. Day6, like the song before, made this song their own. Halfway though, Mamamoo returned to the stage to sing and dance to the song. Everyone was singing along, reminiscing in the throwback moment.

Just when you thought the covers were over, Ailee and Eric Nam returned to the stage performing “Some” by SoYou and JunggiGo. I wasn’t familiar with this song, but the two played the romance feel of the song quite well and the chemistry was great between them. It was confirmed at the end that both are exceptional at acting, confessing the interactions between them during the song were weird.

Finally, the headliners were making their way to the stage. The audience had been waiting for this moment and couldn’t hold back any longer, knowing all the artists had already performed for the night and there was only one left. Despite not needing an intro, a video introduction played, possibly messing with the crowd’s inability to wait.  And after a pause that seemed like an eternity, “Fire” started to play as the members of BTS arrived, coming up on a platform through the stage.

The energy BTS gave though their entire set list was out of this world and no one dared to sit during their performances. “Save Me” was their only slow song so to speak, but the energy started to incline again when they performed “Fun Boys.” But what really got the crowd hyped back up was when they surprised the audience with “Cypher pt. 3”. BTS hasn’t released a Cypher since before their The Most Beautiful Moment in Life series. Even though the crowd went crazy for “Fire,” when the first few beats of “Cypher pt.3” dropped, the crowd promptly lost their– well, you know.

The group wrapped up the concert with “Dope” which was a great way to end their set list and the night because KCON 2016 NY Saturday night’s concert was nothing but “Dope”.

I don’t know about any of you who attended Saturday’s concert, but it felt too short. The blocked off the time for the concert was 7pm – 10pm, but the concert ended at 9:30pm. Not only that, but considering BTS was the headliner, they could have done at least three more songs to have a total of eight performances. With BTS’s setlist, adding “I Need You” and possibly swapping out “Fun Boys” for “Bapsae” would have made the concert more enjoyable… 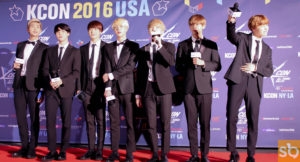 Even though I feel this way, I left the concert feeling content. I was able to experience all the artists in person and be swept up by the energy from the concert. I walked into the Prudential Center feeling tired from all the coverage we did during the day, but that was all gone the moment the lights went low and the concert began.

What was your experience during the concert? Did you wish for more or just felt bless enough for it to all go down in one night? Please leave your thoughts in the comments and hope to see next year, KCON!