Expounding A Candid Courtship: Baek A Yeon's "So So" 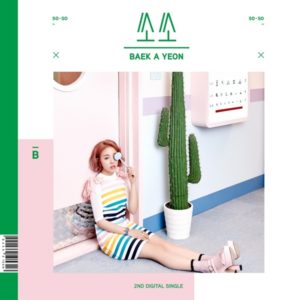 After enjoying marvelous popularity with the revelation of her first self-composed track “Shouldn’t Have” following a two-year hiatus last summer, JYP Entertainment’s sweet-tempered starlet and singer Baek A Yeon made her comeback on May 24th with the release of yet another self-composed single titled “So So.”

“So So” comes in a fashion similar to the pleasantly pulchritudinous aura of “A Good Boy” with its soft-hued videography, professedly feminine take on romance, and sensorial dramatization of real feelings and experiences.

The MV encloses a rather original twist to the generic story of lackadaisical longing in which a heartbroken young woman sees a world full of flowers and euphoria before her but is tragically outcaste from it because she is forlorn and loveless. In the case of “So So” Baek A Yeon proffers a little hope amidst the sorrowful theme of her MV by giving it an ingenious ending that emphasizes the overall theme of the song; wanting to love and be loved wholesomely is not always glittery and story-like. With its empathetic lyrical subjectivity (a single-minded attention to the often melancholic realism of love), curiously crafted plot, and antithetically dainty MV “So So” is a story that Baek A Yeon tells with soulful flair.

“So So” presents to us an aesthetic illustration of a “love hospital” that looks like a modern rendition of the Grand Budapest Hotel made up of romantic vaults and nooks, with a playful and girlish color saturation that radiates what is expect to be joy and passivity. In contrast, Baek A Yeon appears before us with a rather desolate and aloof expression on her face, she holds up an optical instrument to her eye as is she is in the midst of an examination. The melody of the song slowly sneaks into the MV sans any bombastic sentimentalism or instrumentals and the acoustic background pronounces Baek A Yeon’s smooth and youthful vocals cleanly. In similar vein to spoken word, she makes a musical statement as she details her private feelings of languor and monotony in an unreservedly honest manner. 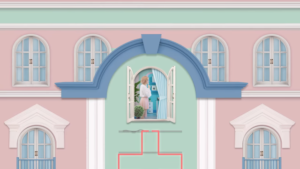 Meanwhile Baek A Yeon meets with her doctor and undergoes a session resulting in a conclusive admittance to the love hospital as a patient, unlike most hospitals this one is unique as her doctor and the pretty nurses attending her are set on healing the cause of her worn out heart by prescribing her enticing pastries to eat, inspiring her waning passion with romantic movies, and carefully organizing a date for her with a handsome granted ludicrous young man.The acoustic flavour of “So So” remains consistent and is underscored suitably by a café-esque piano melody, jazzy percussion, and a trimmed electronic blues rhythm.

The superimposition of her vocals over the marginal acoustic instrumentals crafts a balanced finesse that demonstrates Baek A Yeon’s stability and range, successively the bridge is ushered in as the elementary instrumentals are dropped altogether and the focal point converts to her light-hearted inquisition as to whether or not the one she is waiting for is there and how anxiously she wants to meet them.

After she has brushed off the ersatz advances of her date the first glimpse of pure happiness is seen on Baek A Yeon’s face as a little poodle clad in pink mysteriously dallies into her room, ready to play and please. It is as if the artificiality of her environment which augmented her feelings of indifference and boredom is swept away completely because of the innocent and unconditional manner in which the puppy approaches her, here the lyrics of “So So” diverge optimistically from the previous resolution of dullness and mediocrity as Baek A Yeon insightfully ponders the whereabouts of her true love and potentially meeting him instead of lamenting her “so so” lifestyle of chronic loneliness and emotional desistence.

Where are you, what are you doing? Have you even been born yet?
Please appear before me now, the one who I’ll give my heart to
As soon as I see him, I wanna hug him

The fateful twist following the absence of the puppy form her bedside is the event that positions the videography of “So So” as thematically distinct from other music videos of the same plot and focus and ties the MV together in its entirety. The aura of the song reverts back to a despondent and mellow intonation when night sets and then instantaneously soars to a cadence full of hope and desire, when her canine companion exits her room to find something outside she intriguingly follows it out. 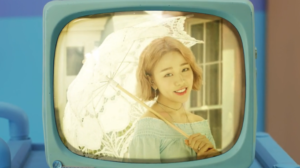 We pleasantly learn that the puppy ran out to meet it’s owner, a presumably handsome and patient young man gentle enough to approach and cheer her up with his innocent pet before making himself and his feelings known. In this way the poodle was sent to Baek A Yeon as an envoy of her admirer’s true feelings, he did not want her to feel aversion by wooing her with flowers, cooking her a fancy meal, or putting on planned performance just for her.

The conflict between a calculative courtship and a candid courtship by means of an innocuous medium results in the puppy and Baek A Yeon’s secret admirer prevailing as her rising face slowly reveals a mystified and trustfully love-struck expression in earnest.

Following the decline of the MV the musicality of “So So” delves into plummeting instrumentals and stresses Baek A Yeon’s final proclamation of actively wanting to fall in love in the form of a sweet whisper, the melody concludes with an enchantingly lunar lilt and pans out of the love hospital which housed a dejected young woman while coincidentally offering her the chance to meet her one true love. “So So” is visually unique because of its unsuspecting spin on a notably overused story but not entirely unique musically as the melody is monotonous and repetitive at times, either way it is a strong compositional effort on Baek A Yeon’s part and suffices to demonstrate the emotionality and personality she puts into her music as a solo artist.

Readers, what do you think of “So So”?