Since Infinite‘s debut six years ago, the K-pop scene has evolved in many ways. The scene has seen a rise in idol soloists, including Infinite’s own leader Sunggyu with his well-received but rather under-appreciated mini albums, Another Me and 27. After years of anticipation from fans, the group’s other main vocalist, Woohyun, has made his solo debut with Write.., a mini album of ballads.

The album has been performing quite well on charts and in sales, selling out all 50,000 copies the very day pre-sales began. Its design also led to an amusing episode: it created much confusion for fans who were unable to open it, prompting producer J. Yoon (also a member of M.C the Max) to come to the rescue by uploading a tutorial on his Instagram. This would not be the first time J. Yoon has worked with Infinite; he previously composed Toheart‘s “Maze” and a number of B-sides for Infinite, including “Tic Toc” and “Voice of My Heart.”

K-pop has been bringing some solid ballads this year, and the tracks off Write.. add to this string of success in the genre. The first track is “Write..,” a short instrumental prologue. The delicate tinkling of the piano and wispy string accompaniment evoke mild sorrow, setting the tone for the rest of the album.

The title track “Nodding” expresses the loneliness and emptiness experienced by a person following a breakup. The song opens by layering Woohyun’s vocalisation over the gentle rocking rhythm of the bass line and the rise and fall of strings. This creates a faraway mood that conveys the person’s mix of nostalgia and regret while thinking about his ex-lover:

I cry because I can’t forget
I cry although I want to forget
In the end, it’s greed, it’s all my fault
There’s no place for me to hide in my heart 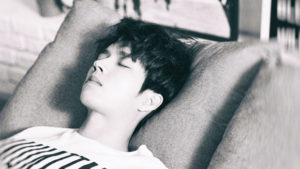 Woohyun has a clear, mellow voice that is well-suited for ballads. His falsettos transition smoothly and are well-controlled. The wistful delivery tones down the slight melodramatic slant to the lyrics, creating a restrained but palpable melancholic mood that makes the ballad exceptional.

Next up is “That Person.” The opening piano melody and strings remind me of sageuk OSTs. The lyrics also present the thoughts of someone after a breakup, but with a more bitter tone in addition to a sense of regret. It expresses hurt and sadness more openly than “Nodding”: 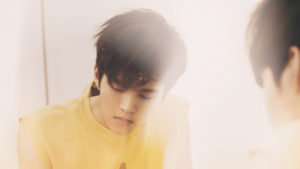 Ballad lyrics often use nature metaphors, and here motifs of light and shadow are used to reflect the changes in the relationship. The build up to the lines “I remember when I was a shining light to you / But now I’m a shadow to you” make for a particularly heart-wrenching moment. This track sounds like something a younger singer would cover on Immortal Song many years later, and it is a personal favourite of mine alongside the title track.

Woohyun has recently been trying his hand in composing, and he pushes on with this endeavour in this album, contributing to the next three tracks. “Scent,” for which he both penned lyrics and composed music, continues revolving around post-breakup sentiments:

Drunk in your scent, I return again [to the past] Your scent makes me look back

In this chorus, the instrumentals bloom and spread like the scent of the persona’s ex-girlfriend, carrying the listener and him into the past. Again, Woohyun’s falsettos hit the mark. The song is a pleasant listen and sufficiently conveys longing, but it doesn’t stand out very much in terms of lyrics.

“Gravity” has a markedly different sound from the previous three ballads; it is a welcome break from the slower pace. Genre-wise, it leans more toward pop rock with its use of electric guitar and drums. Musically, it reminds me of the Chinese and Japanese pop rock ballads I listened to in my early teens. The song expresses this persona’s vivid recollections of an ex-lover, expressing his regret and promise to cherish her although she is gone. 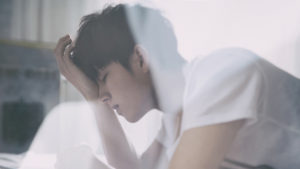 The mood quietens back down a little in “Stand by Me”. The opening pairs piano chords with breathy vocals, before building up slightly with the entry of guitar and drums. Sound-wise, it is reminiscent of CN Blue‘s slower tracks; Woohyun sounds remarkably like Yonghwa in the line “I have no one to blame but myself.” The guitar chords lend a brighter feeling to this song compared to the previous ballads on the album. The persona also addresses his ex-lover more directly than before:

I can’t go on without you
Can’t we turn things back?
But you said you can’t love me anymore

In an album that circles around one theme, the lyrics are key to sustaining quality and interest. This is where Write.. falls short, as it does not push beyond familiar figures of speech in ballad lyrics. Hence, instead of adding up to present a more nuanced picture, the break-up sentiments start to wear thin after the first few tracks.

Unlike what Another Me and 27 did for Sunggyu, and what the Toheart releases did for Woohyun, Write.. doesn’t quite expose Woohyun to markedly different sounds. Nevertheless, it is a solid, focused album. By starting with a genre that Woohyun is familiar with and good at, and allowing him some artistic freedom, it paves a steady way for what will hopefully be an illustrious solo career.

Readers, what did you think of the album? What genres and sounds do you hope to hear from Woohyun in future?