Red Velvet's "One of These Nights" Is a Poignant Elegy 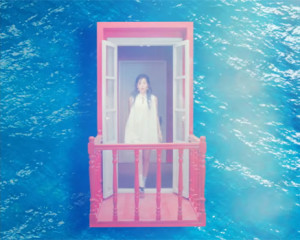 As captured by the group’s name, Red Velvet has two major concept types. Their “red” songs, such as “Ice Cream Cake” and “Dumb Dumb,” are lively and bubbly, while their “velvet” songs, such as the classy “Be Natural,” are more mellow and mature. So far, the two strands are proving successful in promoting Red Velvet’s bubbly image through the “red” tracks, while allowing their vocal and dance skills to shine through the “velvet” ones. After giving us a good dose of their “red” side last year, Red Velvet is making a “velvet”-themed comeback with a ballad: “One of These Nights.”

At first glance, “One of These Nights” appears to be quite a simple song. It expresses yearning for a loved one, a theme that is common in many ballads. However, Irene has explained on various music show interviews and a recent episode of Weekly Idol that the song is about the story of star-crossed lovers Gyeon-woo and Jik-nyeo. This is the folktale behind Chilseok, a traditional festival celebrated in Korea on July 7 of the lunar calendar; the Korean title of the song is a reference to this date.

As the story goes, Jik-nyeo, the daughter of a king of heaven and a skilled weaver, descends to earth for a visit one day. She meets Gyeon-woo, an orphaned cow herder boy, and they fall in love. She stays with him secretly, and they marry. But the Jade Emperor finds out and separates the lovers. During the moment of parting, they cry with such sorrow that magpies are moved, and they form a bridge across the Milky Way (known as the Ojakgyo Bridge) for the lovers to meet once a year. This annual meeting falls on Chilseok.

The lyrics of “One of These Nights” expresses longing for this moment of reunion to be suspended and captures both the sorrow of parting and the hope of meeting again. I’ll leave the detailed analysis of the song for the album review of The Velvet, but overall, the minimal accompaniment places the girls’ singing at centre stage. Their delivery is delicate and beautiful, but also plaintive.

The MV’s visuals differ from what is expressed by the lyrics, but there are some touch points where the meanings of the MV and the song coincide. A sense of loss pervades the song as well as the MV. The song speaks of the distance between the earthbound Gyeon-woo and Jik-nyeo in the skies and their crossing in order to meet once a year. The MV uses soft focus and a rosy tint to create a dreamy effect and a surreal setting in which the girls (except for Joy) cross over from life into afterlife. In one sequence, Seulgi stands in a passageway with flickering lights for a moment and opens a door into a light-filled forest. The ethereal glow and the white cloaks that Seulgi, Irene, Yeri and Wendy wear suggest strongly that the forest represents heaven.

Blogger Jo Syu-ah wrote a detailed post with incisive examples that suggest the MV is a remembrance of the Sewol ferry incident. If this is indeed the intent of the MV, it will not be SM Entertainment‘s first time engaging with the issue: f(x)‘s “Red Light” was belatedly revealed by one of the SM producers to be a criticism of the incident. There is enough evidence in the MV to support Syu-ah’s argument, so I will further it. Instead of repeating the details in her post, I will be organising my analysis around the cinematic aspects of the MV, exploring how they reinforce this reading. 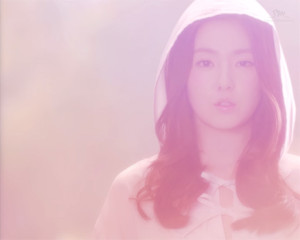 In contrast to the warning tone and sense of urgency in “Red Light,” “One Of These Nights” is a poignant tribute to the victims and an attempt to reach out to the grief-stricken survivors. The meticulous editing and planning of visual elements come together to create an elegiac tone. Two artistic choices cue the viewer into associations with the Sewol incident: the ship setting — suggested by the narrow passageways that Wendy and Seulgi walk in, Irene’s porthole and Yeri’s boat — and the overwhelming presence of water images.

The English translations of the Chilseok story were not very detailed, but in the Chinese variation of the story, the water motif does recur. Gyeon-woo first meets Jik-nyeo when she is bathing in the lake. He later nurses an old injured cow, who is a fallen deity from the sky, back to health by washing it in dew from flowers. Finally, he gives chase in a boat made from the old cow’s horn, and the Milky Way is characterised as a river (see the full story at the end of this article).

Nevertheless, the water motif in the story is not really prominent unless you look out for it, and it doesn’t actually harm any of the characters. Given this and the fact that the Sewol incident is so deeply impressed on the Korean national psyche and the consciousness of K-pop fans, it is reasonable to suggest that the tragedy is what comes to mind first when the viewer sees the images of water. 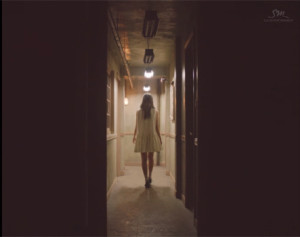 Water is everywhere in the MV, surrounding the girls, drenching them and even drowning them. Seulgi walks toward a balcony, and a pull-back shot reveals it is enveloped by bright blue water. Wendy stands in the rain, wearing a mermaid skirt (a beautiful detail I almost missed); her red hair is also somewhat reminiscent of Ariel in The Little Mermaid (although this is possibly a coincidence). Yeri, looking ethereal and vulnerable in a pink tulle dress, lies in a boat filling up with water. Irene falls as water bursts through a porthole.

Joy alone scales a ladder to leave the water behind. She is the only one in focus when the girls sit around a table, and she alone remains in the light as the others disappear into darkness. She also doesn’t wear a white cloak in the forest shots. Put together, these clues suggest that she represents a survivor.

If Joy represents the survivors, and the other members represent the victims, then the key theme of the MV emerges. It expresses the sorrow of parting, an idea that ties it together with the song. The girls look at the camera with haunting, mournful gazes, and the visual expressions of sadness are reinforced by wistful lines in the song, especially Seulgi’s “잘 가.” The phrase literally means “go well (safely),” and it is often translated to “goodbye” but also carries the meaning of “see you later.” 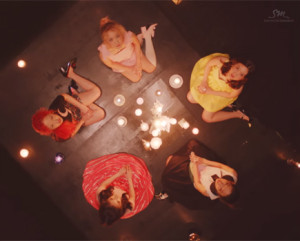 Amidst the sorrow, there is a tiny glimmer of consolation in the possibility of reunion, an idea expressed in Joy’s line in the chorus, “Let’s meet again.” There is a mix of sadness and comfort in the image of the girls seated in a circle, with candles lit in the middle, invoking the practice of lighting candles in memory of the deceased, especially in the aftermath of a tragedy or disaster. The sense of hope is reinforced in a shot that pans up from the girls to a pink aurora across the star-dotted sky.

Aesthetically, the MV combines the “red” and “velvet” sides of the group. The toy-like colours of Seulgi’s balcony and Yeri’s boat recall the vivid tones of the “Dumb Dumb” MV, the pastels resemble the sweeter colour palette of “Ice Cream Cake,” and the white dresses are reminiscent of the fashion in “Automatic.” It is easy to overlook a lot of nuances in the first watch. A closer look reveals how the production team has balanced rich details and beautiful match cuts to create an understated effect, achieving the desired emotional timbre in a way that is nothing short of brilliant. 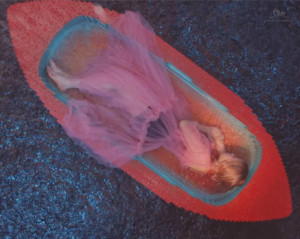 Overall, it is encouraging to see girl groups shifting towards more meaningful MVs that do not capitalise purely on looks and accompanying qualities like cuteness or sexiness but rather focus on emotional expressiveness as well. One of SM’s producers revealed in an interview with DongA News last year that they are reflecting on the music that the company is good at and working towards music that people wanted to hear. “One of These Nights,” like Exo‘s “Sing for You” and Amber‘s “Beautiful,” seems to be part of this larger shift. Here’s to hoping that we see increasingly meaningful releases from SM in future.

Readers, what did you think of “One Of These Nights”? Is the reading of it as an elegy for the Sewol incident a convincing one?

I have translated the full Chinese version of the Gyeon-woo and Jik-nyeo tale for further reading:

Zhi Nü is the daughter of a king of heaven and a skilled weaver, while Niu Lang is an orphaned cow herder boy. He is dependent on his brother and sister-in-law for a living, but the latter despises him. She sends him off one day with nine cows, telling him not to return until he has ten of them. As he reflects sadly on his situation under a tree, an elderly man passes by and tells him to look for an old, injured cow on Fu Niu Mountain and nurse it back to health.

Niu Lang finds the cow, and after being fed the cow speaks, explaining that it was once a deity, but was cast out of heaven because it broke some laws. It broke its legs while falling from the sky, and can only heal if he is bathed in flower dew daily for a full month. Niu Lang agrees to the arduous task, and brings the old cow home with the rest of the herd after it recovers. Niu Lang’s sister-in-law is displeased by his return, and chases him away, and he requests for the old cow to accompany him.

One day, Zhi Nü visits the earth and the old cow arranges Niu Lang to meet her while she is bathing in a lake. They fall in love and Zhi Nü flouts the rules to marry Niu Lang secretly, bearing a son and a daughter. But the Jade Emperor (who rules over all of heaven; not the same person as her father, who is one of the several kings of heaven) finds out and orders Wangmu Niangniang to bring Zhi Nü back. Unable to bear their parting, the old cow breaks one of its horns and turns it into a boat for Niu Lang to give chase, his young children in tow.

Just as he is within reach, Wangmu Niangniang removes a hairpin and creates the Milky Way (known as the “Silver River” in Chinese) to block him off. Facing the prospect of being separated forever, the lovers weep, and their sorrow moves the magpies. The magpies form a bridge (Que Qiao) for them to meet once a year, on the day of Qixi.