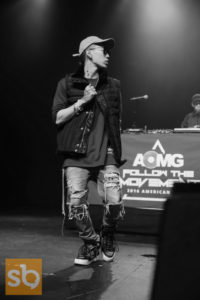 Jay Park has been incredibly busy. In the span of two and a half years since he founded AOMG, he’s released ten singles and two albums. He’s been a variety show staple, regularly appearing on Saturday Night Live, Show me the Money, and Dancing 9 among many others. At the same time, he has turned AOMG into a budding hip hop label.

He’s also been touring with his label. Following a short US tour in late 2014, AOMG did another short run in Korea earlier this year before embarking on a much more rigorous schedule which took them across 8 US cities in 13 nights. Luckily, I was able to attend the second to last stop of the “AOMG Follow the Movement 2016 American Tour” in San Francisco. But before I talk about the concert, let’s talk about AOMG’s place among DIY hip hop labels, meaning labels which were founded and run by hip hop artists. 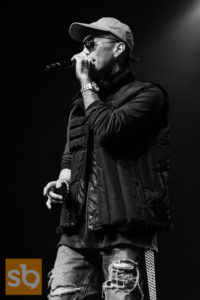 In this industry, it’s all about connections; it’s all about getting the right people behind an artist. Success isn’t dependent upon talent as much as it’s dependent upon who’s representing the artist and who’s distributing the music. The reach of the label and its distributor means the difference between commercial success and failure. This is where connections matter a lot because getting one of these giant conglomerated distribution chains to partner with a newly formed hip hop label isn’t particularly easy.

With that in mind, there are a couple of grass roots hip hop labels which have established quite a name for themselves. Starting with the biggest one with the longest history, IC Entertainment was founded in 2003 by Rhymer. It has gone through several incarnations, having dipped its toes into the idol game as Brand New Stardom until 2011 when it split off and rebranded itself as Brand New Music. It currently boasts a bloated roster of over 20 artists and producers with Verbal Jint and San E getting the most gloss. Brand New has become a mainstay of the entertainment industry having heavily participated in Mnet’s popular hip hop competition programs, often deploying its artists as participants, judges, hosts, or producers. It currently utilizes LOEN and Neowiz as its distributors.

Second in line in terms of longevity, Amoeba Culture was co-founded in 2006 by the members of Dynamic Duo and currently boasts a roster of six with Dynamic Duo, Primary, and Crush as its headliners. Its presence in the industry was strong for some time with Primary and Zion.T making a name for themselves as producers but it’s since experienced some instability with the departures of Supreme Team and Zion.T. Its distribution chain is still solid, however, with LOEN and CJ E&M as its partners. 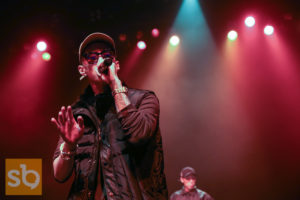 Co-founded in 2011 by Dok2 and The Quiett, Illionaire Records boasts a humble yet essential roster of three. Dok2 and The Quiett have established themselves as outstanding producers while Beenzino has been largely benefiting off of having such a strong supporting cast around him. Distributed by CJ E&M, this small but superb label is on the up and coming.

This finally brings us to AOMG. Founded by Jay Park in 2013, this label has done quite well in its short time of existence. It currently boasts a roster of 11 artists and producers with Jay Park, Simon D, Loco, and Gray at its forefront. While Jay Park gets top billing over everyone else, the rest of the roster is not to be overlooked. Other than those artists mentioned, the label also consists of DJ Pumpkin (who was DJing at the concert), formerly of Amoeba Culture, and also dancer and producer extraordinaire Cha Cha Malone. Furthermore, it’s finally hit its distribution stride by partnering with CJ E&M this past January. With all this in mind, let’s talk about the concert and the performers within the context of how each of them contributes to AOMG’s success in the DIY hip hop scene. 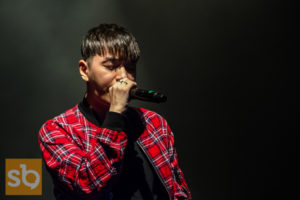 First up was Simon D, a former member of Supreme Team, who left Amoeba Culture to become co-CEO of AOMG. Starting the show off with their most experienced rapper was a good choice. Simon D knew exactly how to hype up the crowd as he kicked off the set with “Simon Says” before transitioning seamlessly into his hit songs, the self-titled “Simon Dominic” and “Won and Only.” My favorite moment of his stage was when the beat quieted down, allowing him to highlight his rapping chops as he wowed the crowd with his rapid fire delivery in “Money Don’t Lie.” He filled the latter part of his set with older hits from his Amoeba days such as “Lonely Night” and “Cheerz.” Towards the end of his set, he splashed the audience with a bottle of water, temporarily quenching us of our insatiable thirst for what was still to come.

Simon D set the stage for the next performers, the tandem of Gray and Loco. Gray came out first and entertained the crowd with “High No More” before Loco got on and performed “If I.” My favorite performances from this double act were the tracks in which they performed equally together, most notably “Respect” and “In My Head.” As a duo, the two make a fine team. I really enjoyed their rather laidback vibe which was a good contrast to the fiery temperament of Simon D. 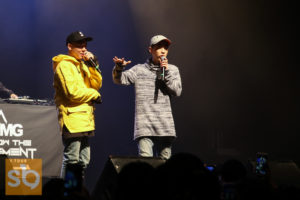 There’s no doubt that Gray and Loco are the darlings of the label. Gray is a bit of a musical everyman in that he raps, sings, and produces. Loco is a very enjoyable performer to watch because of his easygoing persona. His deliveries are on point and complement Gray’s rapping and vocals really well. They’ve both already accomplished a lot in their short time in the limelight. After winning the inaugural season of Show Me the Money, Loco released an album under AOMG and participated as a judge alongside Jay Park on the show’s fourth season. Gray is a bit of a sleeper in that he’s accomplished so much yet people still may not know who he is. That’s because his best work is done behind the scenes, producing some of the finest hip hop and R&B tracks in the past couple of years. He’ll likely be getting more recognition since he’ll be replacing Loco as a judge in season 5 of Show Me the Money. 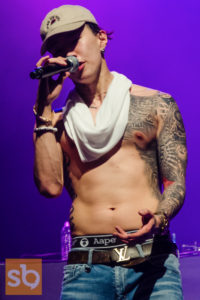 At last, it was time for the main attraction. It was no mystery who everyone came to see. The moment Jay Park took the stage, the place got much louder and livelier at once. He began his set with a sleight of slow jams to get the crowd warmed up but things heated up very quickly once he started hitting us with dance moves in rapid succession. Park then engaged the crowd for a brief moment before jumping into some of his more recognizable songs in “Solo” and “Joah.”

Park didn’t shy away from putting on display all of his star qualities, which was not only limited to his singing, dancing, and rapping. He got the crowd super engaged by telling us about his life, like how he went to a local nightclub the night before but didn’t drink. He talked about how being on Show Me the Money made him want to focus more on hip hop. He even pointed out the numerous panties he saw thrown on stage and kept one in his jeans pocket as a memento. And of course he serviced his fans, most of which were teenaged and college-aged females. From the gradual striptease which occurred throughout the set to jumping into the crowd and allowing those who were fortunate enough to be in the vicinity to engulf him for a frantic couple of minutes, Park pulled out all the stops to make sure his fans had a good time.

The entire crew of AOMG came out in the end to perform a couple of songs together and to pose for group shots in what felt more like an extended conclusion to what was already the climactic point in the evening. Overall, it was a fun night and it was definitely a show worth checking out even if you are, like myself, not a big fan of any of the artists. But by the end of the night, I certainly had a greater appreciation for all of the performers and my respect for Jay Park as a performer and leader of his label drastically increased. 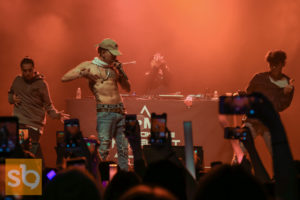 So where does AOMG stand among its competitor labels in the DIY hip hop game? It hasn’t been around long enough to have as much sway or leverage as Brand New, and it hasn’t established as much mainstream appeal as Amoeba, but AOMG is right there with Illionaire in terms of having established a strong foothold with significant potential to grow. Unlike the Beenzino concert which I had the privilege of attending a few months back, AOMG draws a much younger crowd in comparison to its Illionaire counterpart, most certainly thanks to Jay Park and his idol roots. Park is undoubtedly the “x factor” for his self-founded label and having such a considerable presence in that share of the market is just another reason why AOMG has got a bright future ahead of it.

Readers, what are your thoughts on AOMG? Which hip hop labels are you excited about?

Gray’s “I Don’t Love You” is Cool, Chic, and Chill