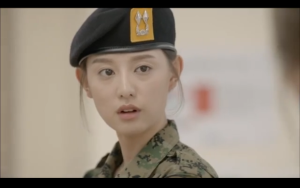 Lately, in the Korean entertainment industry, there seems to be a burgeoning interest in the female soldier. In particular, we have the female editions of Real Men and Kim Ji-won‘s character in Descendants of the Sun, with both shows having high interest and a large audience.

On the outset, the popularity of these female soldiers suggests the growing prevalence of female empowerment via strong females. Since soldiers are typically seen as figures of discipline and adeptness, presenting females in the soldier role allows for females to take on this air of competency separate from that of the traditionally female space of the household. At the same time, the highly regularized nature of the military causes one to consider whether or not the emergence of the female solider is actually a reassertion of institutional authority.

A New York Times opinion article considers the prevalence of sexism in the South Korean military. Since the military is considered “the country’s most male-centric and conservative organization,” this attitude unsurprisingly leads to female discrimination and continued gender inequality. Additionally, sexual harassment and coercion of female soldiers does exist, which points to the possibility of the assertion of male authority over females in the military. Since there are more men in the military, it would only make sense that more of the figures of high status are likewise male. This would then allow for them to assert their power in terms of the institutional hierarchy. This hierarchy formed with males at the top suggests that the military could be a field of female subjection and mistreatment more prominent than that in the rest of society. 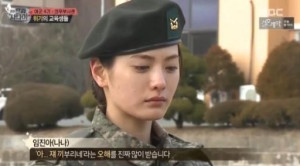 However, the presence of a female valedictorian in the Korea Air Force Academy is supposedly evidence of a step toward gender equality in the military, and suggests that this conservative viewpoint of “proper” gender dynamics may be slowly but surely changing.

While one might turn to After School‘s Nana‘s run on Real Men: Female Soldier Edition as evidence of paradoxical and unreasonable treatment of female soldiers that may occur in the military, these immediate reactions should be reconsidered. Nana was criticized by the commander for the way that she speaks and way that she looks at people because she was “trying to act cute.” It portrays the military as a place where one loses their individuality and personality. They are forced to change everything about themselves from their speech to their gaze, and suggests a suppression of identity – in this case, related to aspects related to femininity and weakness. 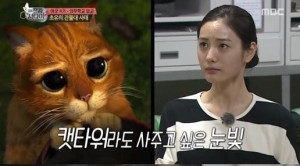 The irony of the situation is that acting cute is portrayed as an act. Nana is supposed to pick up and drop the cuteness whenever necessary, indicating that natural cuteness can’t possibly be real. Or if it is real, it must be eliminated when called for.

This implies that cuteness would also be something that could be turned on and off like the flick of a switch. The criticism of Nana’s behavior presents contradictory and paradoxical representations of the way that women should act. They have to be attractive (possibly cute or sexy, or both) to appeal to society, and are conversely forced to remove all remnants of it when necessary. This imposition on the way females should conduct themselves reveals the contradictory ways in which they should behave.

This might call to mind bullying within the ranks of the military. Due to the power military superiors hold over inferiors, the criticism of Nana’s innate physical traits may be seen as an abuse of power and an unnecessary victimization of a soldier that the commander dislikes for personal reasons. The glorification of the military in the representation of female soldiers then reaffirms the practice of female subordination.

However, we cannot forget that this is the military, and the military relies upon strictness to carry out actions for maximum efficiency. A pitiful gaze or cute voice could potentially bend military rigidity and cause problems in the execution of military command. 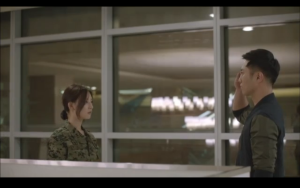 The military is its own institution that has values that differ from the rest of society. This difference could be both freeing and constricting depending on the values individuals mold themselves upon. Nana was molded by perceptions that cuteness is endearing, and the elimination of this perception would unsurprisingly cause much frustration on her part. Thus, it seems that the portrayal of female soldiers does not implicate a reaffirmation of female subordination. However, it does call to question the paradoxes they are made to navigate through.

In the realm of female empowerment, Kim Ji-won’s character in Descendants of the Sun presents a female figure of military might. She said of wearing the army uniform: “it felt like the uniform made me look sexy and cool.” Her words imply feelings of empowerment, and that the uniform is a symbol of power. As the uniform is that of a soldier, these feelings of empowerment then arise from her status as a soldier. To her, the soldier is a figure of power. Subsequently, the female soldier is a figure that embodies that power.

She also mentions that she thinks her character has so many fans because she “is independent, and protects more than she receives protection.” Rather than being a character driven by the events around her, she fights for what she wants and refuses to allow the love of her life slip from her fingers. This is indeed a large step away from the damsels in distress that drama-watchers are all too familiar with, and presenting the female soldier as a dominant, capable figure forms an association between “female soldier” and “empowerment.” This also contributes to the shift in traditional perceptions that men must pursue women but the opposite must not occur, providing females with a lot more power to choose their own fates. 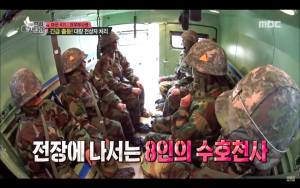 The emergence of characters such as Kim Ji-won’s provides for a powerful female figure that young females could aspire to be. Her position as lieutenant may bring attention to the possibility of female authority figures in a male-dominated space, and her character’s capability as a soldier paints an attractive picture females can aspire to attain. The emergence of female soldiers like her character suggests that strong females are possible in a step toward adjusting the gender dynamics.

It appears that though the emergence of the female soldier in Korean entertainment provides females with a sense of empowerment and a closing gender divide, it also calls to attention paradoxes in gender issues in society as a whole. Nana’s case presents the strictness of the military as a questioning of expected female conduct while also affirming the strict and equal homogenization of all soldiers. Meanwhile, Kim Ji-won’s case presents the rising and increasing representations of female authority figures. Both figures present a rise in female empowerment and steps toward gender equality.

What are your thoughts on female soldiers in entertainment? Does it provide female consumers with a sense of empowerment?