CNBlue Charms with "You're So Fine" 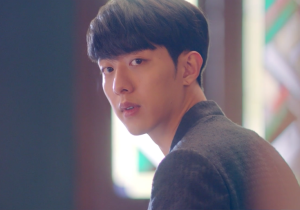 It’s been nearly six months since we last heard from CNBlue with “Cinderella” and the album 2gether. Just in time for Spring, the four-member band is back this April with the appropriately titled mini Blueming, and it’s lead single “You’re so Fine.”

Unlike the electric sounds of “Cinderella,” “You’re so Fine,” sees CNBlue in a  jazzy soundscape, and equally throw-back aesthetics. CNBlue continues to draw from pop trends for their releases, which isn’t a bad thing. Especially in the case of “You’re so Fine” which provides just the right kind of upbeat, sweet sounds that fit perfectly with the blossoming loves of Spring.

CNBlue continues to experiment with their sound while still maintaining the full-band elements that have set them apart in the K-pop realm. In the case of “You’re so Fine,” the jazzy experimentation had paid off reasonably well. The MV is equally charming, though a little unnerving in terms of how much male gaze is squeezed into three minutes.

For the MV, we’re transported back to what looks to be a tropical 1950’s hotel lobby. But this isn’t just any hotel lobby, it’s a one stop shop for all of CNBlue’s needs: there’s a shoe-shining station, a flower shop, an apparently stalled elevator, a dentist, a wine cart just meandering about, and finally a band stand somewhere in the space.

The female lead waltzes in in what we’re supposed to take as a less-than-perfect state, with her hair wet and trench coat stained — but of course, to the member’s she’s nothing but perfect. As she helps out the staff, the members observe her independently. Her good deeds continue to win their heart; she gives a flower to the shoe-shine boy, and the glass of wine she gives the dentist (okay, maybe that was a bad call). Of course, Yonghwa gets the girl, and the MV ends with them staring dotingly at one another (but that’s okay, because I’ll consider it as reparations for the tragedy that was his second-lead fate in You’re Beautiful).

But, let’s be honest, the real star of this MV is the little shoe-shine boy and his adorable smudged cheeks. 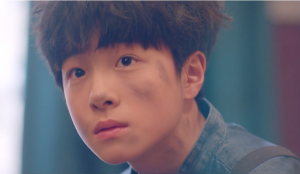 The fact that the MV is all about the members admiring the girl — without fighting over her — really is nice to see. They’re also admiring more than her looks, as it’s the small, kind gestures she does for those around them that really endear them to her. Even with the good intentions though, the MV is overwhelmed by the male gaze, which is a little unsettling once the novelty of the first viewing has worn off.

The male gaze doesn’t stop in the MV though, it carries through to the content of the track, too. The lyrics of “You’re so Fine” attempt to move beyond just physical appreciation and into the appreciation of the woman as a person, but — much like with “Cinderella” — fall a little short. In fact, most of the track is spent discussing the woman’s physicality, and how the male sees her.

They all look great on you, don’t worry girl

Don’t worry about that

It’d be selfish if you were any more perfect, baby

While Yonghwa & Co. tell her that she’s physically “perfect,” no matter what, the closest we ever get to sentiments beyond her looks come in the chorus line “your personality gets me again and again” — which doesn’t really mean much. Yonghwa’s lyrics, though sweet and somewhat genuine, can’t seem to break through the superficial. I wouldn’t say there’s anything wrong with penning a song about how lovely a person looks, but “You’re so Fine” is clearly trying to sell me more than the superficial sentiments behind it, and that’s where it falls short. 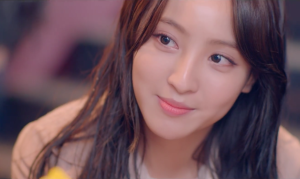 Luckily for CNBlue, the MV does a bit better job of branching beyond the surface by attempting to highlight the woman’s personality in addition to ogling her looks. (Admittedly though, the track is titled “You’re so Fine” and not “You’re Beautiful Inside and Out” for a reason.)

Musically, “You’re So Fine” is a logical follow up to “Cinderella,” but improves on much of its predecessors weaknesses. CNBlue have abandoned most of the Maroon 5 sounds electronic elements that plagued “Cinderella” and replaced them with a throwback, jazzy sound that compliments Yonghwa’s vocals quite nicely. There’s less electric lead guitar and a lot more bass against the added brasses, and Jung-shin rose to the occasion; aside from the cooed hook of “love is you,” the base line is one of the most stand-out elements of the track.

The song could certainly do without the awkward talking at the beginning of the second verse — as well as the command to “put your hands up” in the bridge — but for the most part, the melody of “You’re so Fine” is pleasantly light, and catchy. It’s the kind of melody that goes well with the season, along with Yonghwa and Jonghyun‘s vocal colors. More than anything though, the members look like they’re having a fun time performing the track, and I think that enjoyment carries through into the music itself.

“You’re So Fine,” continues CNBlue’s movement towards more the trendy pop side of things. Which, much to many fans’ dismay, won’t decrease the western-pop artist comparisons to be made. However, this more poppy sound is the direction the band has been moving towards for the past couple of releases now. This notion is only further cemented by the fact that the members had a hand in composing every track on Blueming in some way or another — confirming their investment in putting forth this kind of music. 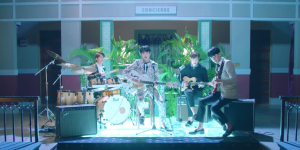 While some may lament CNBlue’s original style — myself included —  I think it’s also time to accept the musical path they’ve chosen and appreciate it for what it is: public friendly, trendy, pop-rock. Even more encouragingly, CNBlue continues to explore their own musical inclinations within the pop genre: While “Cinderella” pulled on more electric influences, “You’re so Fine” draws from jazz, and it’s a toss-up where they’ll pull from next.

Overall, Blueming seems to be an appropriate title for this mini album and it’s lead single. Something about “You’re so Fine” fits perfectly with the mood of spring, and — a few lyrical short comings aside — it’s a sweet track to play along with the changing of the seasons.

Readers, what are your opinions on “You’re so Fine”?