Taemin Pushes All the Right Buttons in "Press Your Number" 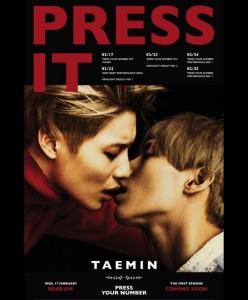 Taemin’s comeback is in full-swing with his MV, “Press Your Number.” The Bruno Mars penned track is what you would expect; “Press Your Number” sounds a lot like a synthed up version of one of Bruno’s slower dance songs. The beat is extremely danceable, funky, and retro, making it a good fit for Taemin. It also allows Taemin to retain that certain quirky quality that both he and SHINee are known for. His vocals have improved greatly from his solo debut two years ago and “Press Your Number” really displays this progression. It feels like Taemin is in control and that these songs are more representative of what he wants to do as an artist.

“Press Your Number” is a departure from the house/EDM heavy inspired songs that SM has been releasing lately; even though synths and drum machines are present in the song, the way it has been arranged is more funk than house. The jangly guitar that’s ever present helps solidify that funky vibe, creating a sort of syncopation with the backing beat. It’s a deceptively simple song that layers multiple elements to emphasize the disco beat that drives the song.

The lyrics are about missing a past lover after a rough break up. Taemin misses the physical connection the two had, singing about how his favorite place is “Your red lips, tightly shut/Your kiss has left me.” He keeps calling her, but she continues to ignore him, causing him to feel hopeless. He acknowledges that she has all the control, with the chorus being:

Press my number, answer me
Do it fast, do it slow
You control the tempo
Feel it, listen to it
Girl, there’s something about it

Taemin wants nothing more than to get back together with the girl that he broke up with. It’s a far steamier song than “Danger;” content-wise, it’s closer to “Ace.” It lets Taemin to be more mature than his previous album. It fits really well with the overall vibe of the song. It lends itself to body waves and Michael Jackson-like choreography, all of which is something Taemin is known for.

The MV itself is visually stunning. With its oversaturated blues, the “Press Your Number” MV creates an otherworldly atmosphere. It also helps that the color palate is mostly blue and maroon, two colors that look good when oversaturated. The MV opens with a strange, discordant technicolor shot of a desert and Taemin, setting the stage for the bizarre journey Taemin takes his audience on. 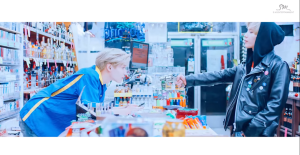 to be some semblance of a plot in the MV, but it isn’t a very coherent one. We see Taemin with a crew robbing a convenience store, living it up in a large abandoned mansion, and finally being chased by cops. These heist scenes are interrupted by shots of Taemin dancing and flashes of a hostage who seems to be the girl from the convenience store. After his crew is arrested, he’s left on his own and buys a briefcase that turns out to be full of blue roses. At some point he ends up tied up in the trunk of the get away car with blue roses. It’s then revealed that the woman from the convenience store was him and somehow he’s kidnapped himself. 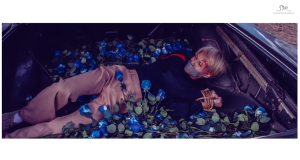 It’s a confusing plot, to say the least. It’s possible we’re not meant to understand it, but since everything feels so curated, so intentional, it is difficult to not try and assign meaning to it, like the ever present blue roses. Blue roses are seen throughout the music video, and in Western culture, blue roses represent prosperity and love to those who seek it. However, in Chinese culture the color blue is associated with immortality and frequently blue flowers are given at funerals. Both meanings could work for the music video; Taemin is singing about a lost love, and who knows, he might be dead in the MV.

The experience of watching the “Press Your Number” MV is a fun one. You get glimpses of Taemin’s dancing with some intense visuals that don’t make much sense, but are amazing all the same. It’ll be interesting to see if this aesthetic carries over into the over MVs he releases, especially since the medley that was released uses similar color palates and styling.