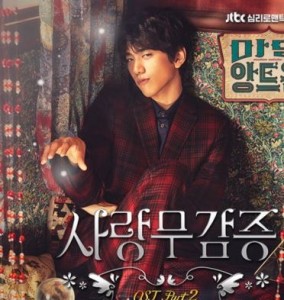 The premise of Madame Antoine is ludicrous even for a Korean drama.

It stars Han Ye-sul as Go Hye-rim, a fortune teller, who unwittingly gets roped into an psychological experiment meant to disprove love. Hye-rim is the second test subject with the experiment using three men: Choi Soo-hyun (Sung Joon) as a representation of wealth who is older, Choi Seung-chan (Jung Jin-woon) as a manifestation of strength, and flower boy Won Ji-ho (Lee Joo-hyung).

All three men approach said subject around the same time, wooing her, until she chooses one of them to date. As the fake relationship progresses, the man has to become increasingly demanding while maintaining the guise of being in love. The end goal is to have the test subject acting extremely out of character in the name of love—their first test subject confessing her love loudly while sitting in a tree.

This experiment was created by Stanford Clinical Psychology Professor Choi Soo-hyun, who also is unprofessionally participating in the second trial’s experiment. Given that the psychotherapist, Choi Soo-hyun, is emotionally stunted by some childhood trauma, it makes sense why the experiment, which focuses on women as the test subjects, can seem misogynistic. 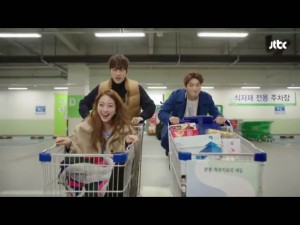 At first, Go Hye-rim has two jobs: running a café called Madame Antoine, and working as a fortune teller to pay for
her daughter’s US schooling. However, when Soo-hyun moves into the second floor as the Madam Antoinette psychologist center, fighting ensues. Beyond her new neighbor, Go Hye-rim has further troubles when the deliverer of her money to Go Young, her daughter, disappears. Desperate, Hye-rim tries to con one of her clients, a chairman, who forces her to spy on Soo-hyun’s psychology experiments since the chairman is funding it.

Unlike normal romantic Korean dramas, which usually focus on character arcs, Madame Antoine plays with structure by utilizing procedural elements. Since the nature of the show rests on Soo-Hyun and Hye-rim interacting in the realm of psychotherapy, having cases be the basis of their communication is a smart idea; the procedural aspect focuses on the psychological elements, while the romantic aspect blossoms as the tension between Soo-Hyun’s book smarts versus Hye-rim’s street smarts. While Korean dramas have had procedurals with elements of romance like Good Doctor, Madame Antoine’s procedural cases are less about showing off Soo-hyun’s or Hye-rim’s abilities in analyzing people, and more about developing the two’s relationship.

In episode 1, their first case was an unnamed man who was choked in a home burglary in which his wife died. His story was interesting, but not delved into deeply. Mostly he functioned as a plot device in which Hye-Rim stole Soo-hyun’s patient and caused their first in-person meeting. 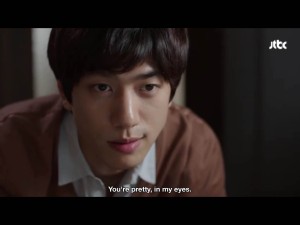 By the time they have their first real case together in episode 2, patient Lee Ma-ri has a more developed story since that gives more opportunity for the leads to work or argue together. Lee Ma-ri is a gymnast who can’t complete her vaulting event because when she’s on the runway her vision becomes blurry. Her counseling appointments have problems since Soo-hyun is definitely knowledgeable but lacks tact in speaking with patients. Soo-hyun believes that since his knowledge is right his patients should want to listen to him since Soo-hyun can genuinely help them. However, Hye-rim’s more practical understanding of teenagers and ability to make small talk reveals the fact that Ma-ri is an outcast.

The biggest giveaway that Ma-ri is being used to further the lead’s relationship is the dual counseling scene where Hye-rim is wearing an in-ear microphone as Soo-hyun assists her in her first attempt at professional counseling. Soo-hyun purposely says words intended to fluster Hye-rim, which also are applicable to cheering up Ma-ri, “No you’re pretty. You’re pretty in my eyes.” 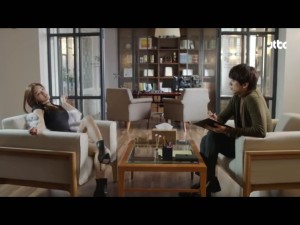 Their third case in episode 3 to 4 focuses on idol Joo-ni (Jaekyung) who has histrionic personality disorder, where one engages in attention-seeking behavior. Joo-ni’s trauma is actually quite depressing as she was in love with her manager, who didn’t like her, which is why she was so cruel to him. Before Joo-ni could confess her feelings, he died in a car accident, which lead to HPD or Histrionic Personality disorder—if she couldn’t have her manager’s love, Joo-ni was going to get it from everyone else. Clearly Joo-ni has a problem since all three men of Madam Antoinette psychology center are trying to court Hye-rim. More of a problem is how Hye-rim wants to help Joo-ni, but can’t help but feel jealous at Joo-ni blatantly flirting with Soo-hyun.

The situation with Joo-ni forces Hye-rim to be more frank with her expectations of emotionally constipated Soo-hyun. If Soo-hyun can be affected by Joo-ni’s physicality but not betray any emotion when confessing to liking Hye-rim, Hye-rim correctly assumes that Soo-hyun must have lied to her. Joo-ni functions as an impetus to Hye-rim being honest in her feelings for Soo-hyun. After all, if she wasn’t the least bit interested in Soo-hyun, she wouldn’t go on these outings with him or care how he acted with other girls.

The rest of these four episodes is filled with Seung-chan doing athletic things like playing baseball with her or carrying heavy boxes and Ji-ho, the genius flowerboy, being awkward in blinking as winking and pestering Hye-rim to do things together. 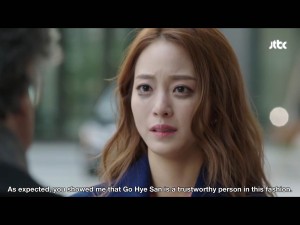 Maybe it’s just the ridiculously good-looking cast, but there is something strangely addicting about this drama. It might be the writing, which seems at time self-aware, or more likely the result of Hye-rim. The way she’s written, Han Ye-seul could overact this role easily. Yet she maintains some semblance of vulnerability while balancing that with the confidence of a woman who has with difficulty accumulated a lot of life experience.

Obviously all viewers of this show need to suspend their disbelief when watching this. This show is a guilty pleasure that is openly transparent in its flaws. However, it does offer something new to the drama realm as a romantic procedural, and Han Ye-seul does an admirable job as a layered heroine.

Has anyone been watching JTBC’s Madam Antoine? What do you think of Sung Joon’s facial expressions?
(JTBC, Madame Antoine)