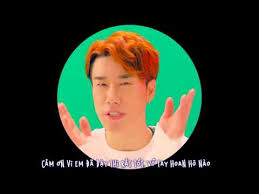 It has often been said that necessity is the mother of invention. While that is true, it is equally true that collaboration is the mother of creativity, especially in music. When two talented artists work together, they can both crawl out of their comfort zones and create something neither would do alone. Such is the case of San E and Mad Clown‘s “Sour Grapes.”

“Sour Grapes” is a great collaboration, one that showcases the skills of both parties without favoring one over the other. On top of that, it takes the popular perceptions of both men — San E as a laid-back charmer and Mad Clown as an awkward dork — and parodies those perceptions to hell and back. Effectively, “Sour Grapes” is the best rap song I’ve ever heard about completely failing to get laid.

San E and Mad Clown take turns waxing lyrical at a young woman they’re eyeing, trying to persuade her home for the night; San E playing it cool with an apology for an earlier remark, and Mad Clown asking to meet her mother so he can make his chosen lady fall for him, but both strike out hard. As such, both write the woman off as an “inedible persimmon” — the translated Korean title — something that cannot be tasted. And yet, the English title works just as well, as the boys are clearly pulling sour grapes over her. 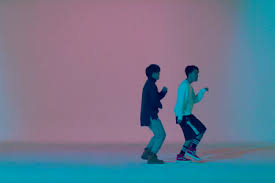 The phrase “sour grapes” means to pass something off as if you don’t want it, when in reality, you can’t get it. Both San E and Mad Clown are trying to reclaim their egos, saying that they’d regret her in the morning, while constantly trying to get with her anyway. And to be honest, they’re kind of awful about it.

Mad Clown insists she was checking him out, won’t take no for an answer, and straight-up tells her to dump her boyfriend for him, a total stranger. San E uses incredibly cheesy compliments that turn creepy, such as telling her the automatic reaction of her male Instagram followers is to “make a tent.” In short, every woman, and a statistically significant portion of guys will hear these lyrics and think “I swear I’ve been hit on by these turds.”

Which is why it is a wonderful thing that the MV exists. The video for “Sour Grapes” is a style-laden extravaganza. The aesthetics on display are top-notch, with a neon, surrealist bent. That’s not to say “Sour Grapes” is style over substance, far from it. Rather, the style draws your eye, but it’s the symbolism that keeps it firmly in place. 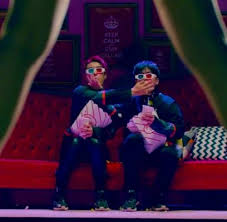 Furthering their lyrical roles, San E and Mad Clown portray parodies of themselves. Mad Clown becomes one of the most awkward rappers to have ever lived, San E epitomizes the club-lingering a-hole, and both get consistently schooled by a woman as they try and fail to pick her up. The scenes are intercut with some hilariously smart symbolism that serves to underline the satire of “Sour Grapes.”

San E is repeatedly replaced by a man with an adorable pit bull for a head, to emphasize that his smooth operator is just a dog. Mad Clown is given an eye-test loaded with sexual images, but keeps missing the rejection right next to the condom he’s focused on. And of course, when the two have an actual naked woman in front of them, they have no idea what to do.

No bones about it, the MV is what makes “Sour Grapes” work. By itself, the song is played so seriously that it’s almost impossible to tell that it’s a satire of the entitled opinion a lot of rappers have about women. The fact is, there are a dozen rap songs insulting women who don’t have an interest in sleeping with them when the narrator wants to, and “Sour Grapes” is not over-the-top enough on its own to surpass them. 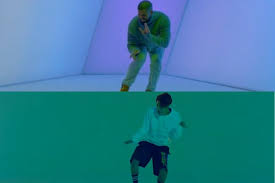 But when coupled with the MV, it’s obvious that “Sour Grapes” is a mockery. Everything, from the symbolism to the stereotypes to the very bored lead actress, is making fun of guys who insult any woman who has no interest in their penis and the songs that cater to them. Yes, even the Drake dancing. Yes, it’s a hilarious reference to the meme-worthy video for “Hotline Bling.” However, “Hotline Bling” is exactly the kind of entitled, insulting song that Mad Clown and San E are satirizing.

While the song falters on its own, the MV more than makes up for that with a killer dose of clarity. It also leaves us with the burning question of “Who is the worst dancer: San E, Mad Clown, or Drake?”