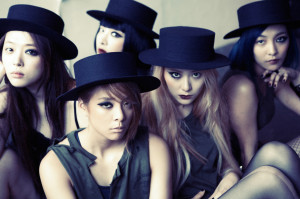 Welcome to another edition of SB Dance Exchange!

Following up on the discussion of odd vs. even, Gaya and I are going to talk about f(x), the newly even-numbered girl group that maintains a reputation of being highly underrated in the international fandom. Starting from debut to their newest release “4 Walls,” off the album of the same name, we’ve now seen f(x) go through changes musically and in ranks. Let’s talk about their progression in terms of choreography.

Let’s pick up where we left off with our last discussion and the biggest change for f(x). How do you think the change from five to four members has worked out for them?

Gaya: Like a lot of groups, f(x) has had members missing from performances before, and they’ve been able to go on with four members. f(x) is a group that relies more on steps than formation when it comes to dancing.

But after Sulli‘s departure, SM would have definitely wanted to step up f(x)’s dance game to cement its new position as a four-member group. SM took a big gamble with the “4 Walls” configuration of four idols and three back up dancers. It’s a strange combination and could have been so awkward.

However, this dance ends up working so well! The dancers perfectly fill up space, without making the stage too crowded. And while the choreo for “Diamond” suffices, “4 Walls” is where the real magic happens. SM’s gamble paid off here. The routine is able to play with formations that are possible with a larger number of people — like the diagonal line during Amber’s first line, the circle around Luna and especially that Krystal-led contagion.

Those formations are absolutely crucial to making “4 Walls” a successful dance. What’s more, it has made “4 Walls” stand out from other choreographies for four member groups, making this comeback from f(x) the more memorable for it.

But it also keeps the four members as the focus, like in that gorgeous dance break. The two dancers emerging from either side towards the end just adds to the symmetry. Seriously, 2NE1’s “IATB” dance break has competition.

Leslie: The dance for “Diamond” is alright, but they definitely deal with the issue we talked about: confusing the audience about where to look. There are some odd placements and formations for sure. Speaking of “Diamond,” in “4 Walls,” the diamond formation was definitely the first thing I thought they would go for as four members, and that gets old fast. But the use of backup dancers — and three, such an odd number (pun intended) — makes it so fresh and different, and I love it. They really play with the dynamics well, especially in that dance break.

I absolutely love the circle around Luna and the contagion. They really imbue the attitude of the choreography. I feel like there’s a lot going on in this dance that I love, but those two are highlights for me.

In general, redoing formations is really difficult usually, but the fact that f(x) has done it before probably made this transition easier. For example, back when Sulli backed out of promotions, and f(x) continued as four for “Red Light,” they actually made that readjustment smooth, using symmetry to their advantage.

Speaking of “Red Light,” this is a pretty big change in terms of style, but they’ve done so many changes before so it’s not too odd. If you think about their debut style and where they are now, they’ve probably hit every type of music in some way, which is great musically, but I can’t deny that I was disappointed for a while with their dances. After the hard-hitting energy of “Nu ABO,” it was hard to accept the simplicity of “Electric Shock,” even if it does have some fun nuances here and there. Thankfully, “4 Walls” upped the ante again. What do you think, Gaya?

Gaya: I completely agree about “Electric Shock.” That album was basically the renaissance of f(x), and I was so sad to see that the choreography had taken a turn for the worse. There are glimmers of what could have been during two of Krystal’s parts — the start of the song, and the second pre-chorus — where she appears to control the other members, and it’s so cool. But then the moment is lost, and we return to the same old formations, capped off by a truly uninspiring hook move (not that the song helped in that regard, but still).

While f(x) definitely brought the energy as rookies, it has been missing from their last few promotions. Luna is the only one who stands out to me in that regard. “Red Light” especially felt flat at times. There could be external reasons for this, but I hope the members find their mojo, as a group, in time for their concert tour next year.

I don’t think f(x) is necessarily ‘bouncy,’ either, but gives out a controlled form of energy with their perfect synchronisation of complex sequences of gestures. f(x)’s hands are what I always end up watching during live performances, because watching them go through all those different gestures is fascinating.

Gestures are the key point of the Nu ABO choreography, and they add flair to the “4 Walls” dance break. Leslie, do you find yourself drawn to f(x)’s dextrous fingers? Or is that just me??

Leslie: Yes! I love f(x)’s use of gestures. They’re not lazy hand motions meant to fill in where they don’t want to give them actual dance moves. They serve a purpose and are so intricate. I too love to watch them in performances because you can tell that they’ve practiced each finger movement and how the body flows into each motion. Yet, it never feels mechanical, just naturally precise.

I think “Rum Pum Pum Pum” used this quite well, too. While the dance overall is not all that impressive, the focus on the detailed hand movements is great. They flip their hands to create symmetry, twist them in unison, and then something else entirely. There’s a lot of variety in terms of how they use gestures, and it works well for that song, even if it could’ve used a bit more energy on the lower half of their bodies with more foot and legwork.

I guess f(x) set a pretty high bar for me in terms of what they can do because I think of “Chu” when they were literally jumping in the air. Then again, those were also the days when Amber wasn’t the only one wearing flat shoes of some kind since they were in their sportier street styling days. Sneakers are far more conducive to fun footwork than the heels we see them in more often than not these days. At least, they get to wear pants, sometimes? 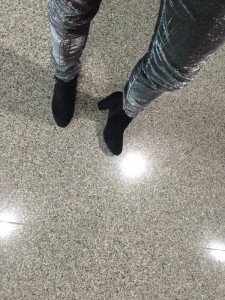 In that sense, I feel like their styling and thus concept changes have played a significant role in their slowdown in terms of energy as well. I think of the high heels they wore for “Hot Summer,” though I have to give them all credit for never wavering in stilettos, miniskirts or dresses. I always notice Luna jumping even when she’s wearing heels — props, man, serious props for that.

What do you think, Gaya? Am I the only one that thinks their outfits can be impractical for dance?

Gaya: I’m actually surprised that they managed for so long without narrow heels. Even Amber had to wear them at one point this promo cycle. It still throws me because “chunky platform wedge heels” is something I associate very strongly with f(x). I think that style is the one that works for the different choreographies and concepts.

But I like the different styles they have for each concept as well. I absolutely adore “Chu” and how they were mostly in pants and runners for the live performances. No way they would have been able to jump so confidently during the “grow up” line otherwise.

I think f(x) is luckier than other girl groups in that their outfits are usually less awkward to dance in (though they can still be awkward to look at — Victoria’s stylist, what’s good?).

Leslie: I hadn’t thought about it that way, but the change also goes with the more mature image they have now. And at least they don’t wear skinny heels all the time. Platform wedges give the most stability as far as heels go so that’s logical. I’m just going to need the coordis to not style them in chunky boots when they need to do small foot movements a la “Electric shock.”

I suppose that of all the girl groups, within and outside of SM, they were the ones I saw following in the steps of Boa with hard-hitting choreography because of how they started as rookies, even if they’ve been going for a more confident, older image now that they moved out of rookie phase. Anyway, the experimental aspect of their handling as a group has made it difficult for them to have a linear progression for dance. I mean, it’d be weird to see them doing “Lachata”-style dance moves to “4 Walls.”

Gaya: Remember when f(x) was called the dance group of Asia or something like that? Three of the members (Victoria, Amber, Luna) have dance experience outside of SM, and Krystal does pretty well, too. But their dance style in recent times isn’t what you’d associate with that type of label. f(x) is the hipster group now, and their dance style reflects that more.

Leslie: This is true. I like that description: f(x), the hipster group. It definitely suits them and the fact that overall they don’t fit the typical K-pop girl group mold, individually and as a unit.

It’s that variety of experience they have that, I think, plays into their great hand motions. Victoria’s background in traditional Chinese dance and Amber’s black belt in Taekwondo, for instance, while completely different types of experience, both contribute to their precise hand movements. I’m excited to see where they’ll go from here with their maturing style in music and dance.

Gaya: I’m with you about f(x) maturing, and their dance style maturing with them. And while some of it has to do with age, I also think this is part of SM’s effort to differentiate f(x) from Red Velvet, which has taken over the youthful image f(x) used to have. At the same time, f(x) is keeping abreast with Shinee’s move into house music and staying experimental. But even with these changes, f(x) still retains hallmarks like the gestures. Whatever f(x) does in the future, I’ll be keeping my eyes on them hands.