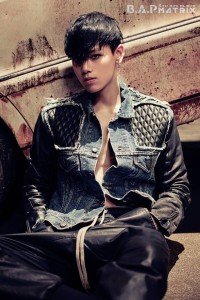 The king is back! Or so maknae Zelo declares on the intro of B.A.P’s comeback single “Young, Wild, and Free.” It’s a lofty statement to make, but after a one year and nine month long absence from promotions, the declaration marks a more than welcome return to the stage and to the hard-hitting sound signature for B.A.P.

Despite filing a contract nullification lawsuit against their company TS Entertainment back in November 2014, the group rejoined the label this August following what TS deemed a “dramatic reconciliation.” Having kept relatively silent on social media following news of their settlement, the members were all undoubtedly aware that their comeback mini Matrix and single “Young, Wild, and Free” would be viewed as commentary enough regarding B.A.P’s return.

With leader Yongguk responsible for production, “Young, Wild, and Free” features heavy beats and a rock influence, with the addition of electric guitar. Sound-wise, the song is a return to the group’s debut days of “Warrior” and “Power,” and frankly, a step up from their more recent releases. While B.A.P’s relaxed and cuter concepts have given the group some diversity to their discography, where B.A.P really shines is in powerful, all guns blazing, declarations of war songs – and the boys definitely need that power and conviction in their comeback if they intend to regain their lost ground. “Young, Wild, and Free” is chaotic in a way we’ve come to expect from their stronger concepts, though it trades some of the no-holds barred aggression found in earlier tracks for a slightly more mature feeling.

The music video opens up with a clip of the album’s intro track “Monologue.” The members stride into the screen, clad in all black, as Himchan narrates:

Lyrically, “Young, Wild, and Free” expands on the intro as an anthem to youth. The verses acknowledge hardships, but declare a will to continue forward despite the obstacles. At one point in the chorus, Zelo sings, “I know we better together,” effectively squashing any doubts fans may have entertained about the group’s future. 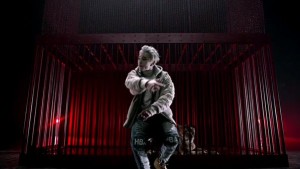 The music video itself looks like a high budget affair, as the flashing scenes show the boys singing and rapping in a large variety of elaborate sets. Particular scenes allude to each one of the adjectives found in the song’s title – one part of the music video shows the members in front of a caged lion, as the shot slides from the animal’s eyes to those of Daehyun’s to emphasize his “wildness.” In another sequence, the members sling paint and Holi color powder at each other, laughing and wrapping arms around one another in a portrayal of youth. Freedom can be similarly found expressed in the video as the members, back in leather and all black, bask before a statue as red flags and banners fly around them, evocative of a successful revolution. This scene raises questions, however, as the music video does not identify exactly who, or what the group has broken free from.

One of the most striking scenes of “Young, Wild, and Free” shows Yongguk blindfolded before a statue as cameras, suspended from the ceiling by strings, revolve around him. In the next scene, the blindfold and cameras have been lifted off of Yongguk. Youngjae’s shots with the casket also emphasize a similar marked distinction between the past and present as he whips the white sheet, covering somebody, away to lay eyes on his own dead body. Clearly, something from their old lives had been restraining the members, but no longer, as they’ve managed to break free. This is their rebirth, in a sense. 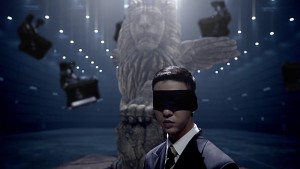 While the majority of the scenes illustrate “Young, Wild, and Free” well, my biggest gripe would be that the separate scenes do not come together as one cohesive music video. There’s a lot going on in the video, and while each shot is visually appealing, some scenes felt excessive or out of place. A few shots show the members striding seriously down a corridor in a set and styling that looks ripped from their previous “1004” music video. Given that the music video can generally be divided into the darker, rebellious scenes and the lighter color fight scenes, the corridor shots stick out like a sore thumb. In addition, several scenes showing the members circled by racing sports cars or singing in front of imposing machinery fit the intensity of the music video, but don’t add much value to the video despite their presumably pricey decoration. I’d rather have TS play more with the “kings are back” themes of royalty and rebellion, beyond the flashes of red flags and thrones at the video’s end.

Despite differing vastly in sound and video narrative, “Young, Wild, and Free” nevertheless reminded me of Block B’s “Very Good,” in terms of intention. There’s naturally more attention on B.A.P at this comeback due to their extended legal battle with TS Entertainment and the release of self-produced tracks by certain members, which only increased fans’ doubts regarding a reconciliation with the company. It makes sense that B.A.P would want to return with an intense, powerful image reminiscent of their impressive debut to convince viewers that this is a fresh start fueled by stronger convictions. 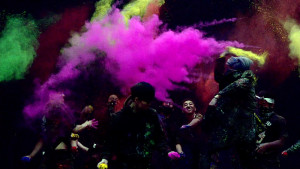 Whereas Block B had the meaningful “Be the Light” as a pre-release, however, B.A.P opts out of a sentimental message detailing their hardships in this comeback. Given that the group is back under TS Entertainment, it makes sense that the company would shield away from including much reference to the actual difficulties experienced by B.A.P and choose to focus on their fighting spirit instead. The only acknowledgement TS makes of the legal conflict — or more aptly, of fan opinion towards the company– is a small tweak of the music video as the TS Entertainment logo is shown at the end of the video, rather than as the usual introduction.

That being said, for what it is, “Young, Wild, and Free” is a more than suitable comeback track for B.A.P. It’s nothing new – the pop-rock “noise” of the track could slot right between “Warrior” and “One Shot” with ease, and the topical lyrics have been sung before in B-sides such as “Unbreakable.” The most welcome surprise of B.A.P’s comeback might just be the more balanced line distribution, as we get a significantly larger earful of Jongup’s improved vocals and Himchan’s husky tone than any of their previous title tracks have allowed. There’s nothing groundbreaking about “Young, Wild, and Free,” as a song or music video for B.A.P, but after nearly two years of legal turmoil and doubts regarding the group’s future, there really isn’t a need for something new this comeback round. Instead, “Young, Wild, and Free,” is here to remind listeners of why they missed the group in the first place with a sound and style that so distinctly screams B.A.P.