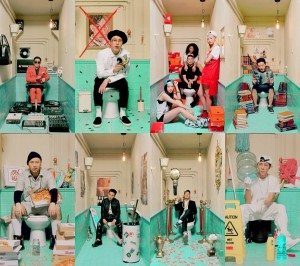 Epik High is back! While some people are busy bickering over what Epik High “is” and whether or not they’ve “lost” what makes them so special, the group lays out an awesome track with “Born Hater.”

It doesn’t even matter that Tablo and Mithra Jin only have a minute of rapping. They put it all out there. The featured artists also do the same. There are three different generations of Korean hip-hop on one track: Epik High-Verbal Jint being of the first, Beenzino the second, and Mino–Bobby–B.I third. That’s a whole lot of heavy hitters.

Each participant discusses their haters and what they hate as well. In the end, they all have a confidence in themselves that dispels the hate and negativity.

As for the MV, “Born Hater” consists of different scenes shot in a bathroom. Where else would you talk about your haters who spew crap other than in the crapper? Also, it’s pretty comical genius that the video is shot in one of the most despised methods of capture: vertical shot. Going to sing about haters in a shot method that haters hate = awesome.

The MV revolves around the premise of the Seven Deadly Sins. Each featured rapper takes on the personification of one of the sins in the scene concept and, sometimes, the lyrics.

Yes, DJ Tukutz has no lines, and his sin would have been hard to figure out if it hadn’t been for all the others being taken. So, why is he sloth? Because he does nothing but sit there playing with his boards. Sloth can either mean laziness — as most of us think of it presently — or it can just mean the failure to act/develop. This actually is pretty funny and seems like targeting to some of his “haters.” There are those who see DJ Tukutz as a non-member since he doesn’t rap or sing. They seem to forget he’s behind the slick mixes that Epik High uses, and his scenes point this out.

Tablo’s first lines are “I’m a born hater,” and he then goes on to list how he’s above everyone. In his scenes, we see paintings with red crosses, signifying that they are no longer relevant. It doesn’t get more prideful than that. 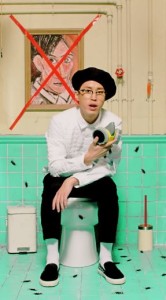 He also directly calls out his own haters: he calls “TaJinYo” cute and unable to win against him. The cockroaches likely represent that particular group of haters. Cockroaches are despised creatures that annoy the heck out of people, especially as they multiply. He goes crazy in his pursuit of the cockroaches’ annihilation. Neither cockroaches nor haters will survive in Tablo’s world.

What are Beenzino’s haters of choice? Those who say he got popular due to looks and keyboard warriors. Given Beenzino’s popularity with the ladies, he’s become a target of those online. He sees these online haters as those who are jealous of his position and declares them simply judgmental.

Beenzino represents envy in a few ways but in particular the things others would envy him for. First there are all the Nikes. Obviously, having a load of kicks is a source of envy for people — just think of how many times Korean artists post their new shoes on Instagram. We see him preening in the mirror while rapping about his looks — good looks are what people want. Additionally, being surrounded by beautiful women is something to envy as well. But those girls must have gotten lost on their way to Verbal Jint’s shooting.

To represent lust, Verbal Jint’s scene has him perusing pornography all the while surrounded by scintillating books and photos. This scene would have been better if Beenzino’s girls had joined in, though B.I being corrupted was pretty funny.

Verbal Jint believes people are born haters, despite coming from different backgrounds. He calls out the sneaky industry people and those whose careers he “ended.” He also states what many non-haters believe: haters are just those trying to forget how unsuccessful they are and target others. To Verbal Jint, his haters are annoying mosquitoes he wishes would go away.

Starting with Mithra Jin, the type of sin of each rapper becomes extremely easy to determine. Consuming massive amounts of food that are scattered around him, Mithra Jin is obviously gluttony. The choice of using him as gluttony seems like a bit of a joke. Mithra Jin was known as the “chubby” member until his return from military service. Whether or not this was intentional or not, it’s still dang funny. 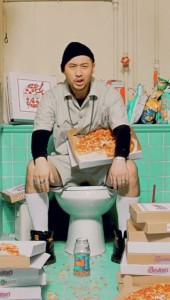 Mithra Jin’s part is more about how he rises above the hate: he keeps working and simply ignores the criticism. Though, he does mention how he’s rather ridiculously labeled as a bad rapper. Mind boggling.

Mino goes around swinging a bat, so he’s evidently representing wrath. From hitting things with a golf club to “breaking” the video camera, Mino has violent reactions. He even raps angrily then glares at B.I who is cleaning.

This also begins the third generation rappers calling out those who criticize their label choice and ease of career. For Mino, he’s had a tough road: not debuting with Block B, disbandment of BoM, and W.I.N: Who is Next?. People think his success is guaranteed simply because of YG Entertainment being his label, and not his skill. He has no time for such nonsense and would rather you just ignore him.

Bobby is all about the bling and the Benjamins, so he’s represents greed. He’s making it rain. He is decked out in refinement and surrounded by a lot of gold. Greed is defined as excessive pursuit and desire for material possessions. Bobby certainly fits that.

In his lyrics, Bobby targets those who say he’s changed. He admits he has, but only because he wanted to change. He also discusses how the old ways of seniority meaning everything is no longer right. To Bobby, the haters can just keep on hating.

B.I is depicted as a cleaner: he tries to help clean up all the mess the others are making. Dressed in all white, he gives off the image of purity. Purity and cleanliness often go hand-in-hand, so there is a definite correlation..

He however is not sitting by quietly. B.I calls on haters to do it themselves if they think they can do better. He also speaks to the industry and the pains of idol life: 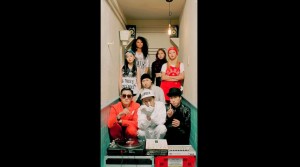 B.I’s ending lines sum up the song quite properly (never forget Masta Wu’s “That’s No No?”).

One thing that’s very enjoyable about “Born Hater” is that it has the flow and sound of a cypher. From the transitions to the format, the song doesn’t sound like a traditional rap song, in that it doesn’t seem like they sat down, wrote lyrics, and then recorded a bunch of times. It has a more organic and natural feel. Each rapper has their own individual style and phrasing. Additionally, DJ Tukutz throws in music changes at random to keep things exciting.

The second enjoyable thing is the sound. “Born Hater” has an old school hip-hop flair and reminds me of Epik High’s releases in the early 2000s. Heavy on the scratches and the beat, the song is pretty classic.

“Born Hater” makes calling out haters fun. With plenty of features and lots of attitude, the song is a great introduction to the return of Epik High.