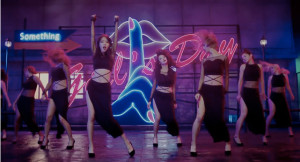 Making a comeback at the start of the New Year is a mixed blessing. On one hand, it gives K-poppers something to open the year with, as well as bring about promises of better things to come. On the other hand, a good January release could very easily be overshadowed by better releases in the later part of the year. This never bodes well for groups looking at year end honours.

Speaking of awards, Girl’s Day are certainly a group that could do with something to recognise their rise. Once practically synonymous with over-the-top cutesy fan service music videos and overtly pitchy singing, 2013 was a year where they made a great image change to give Sistar a run for their money in the sexy stakes.

Their latest release, “Something” certainly continues this run of sexy posturing, but is the song, and accompanying video, any good?

The first thing that was interesting would be the outfits in the dance section. Those high slit dresses did bear a resemblance to those seen in a sexy K-Pop Music Video pioneer, Park Ji-yoon’s “Adult Ceremony.” 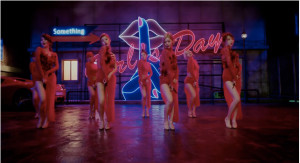 Not a bad thing anyway, given that the outfits helped to flatter that hook move, which was them showing off their legs, and then bending slightly. There was also another move that appeared to be an “adaptation” of SiStar’s “Alone,” where they show their legs and run their fingers across them.

However, given how their entertainment company seems to enjoy chasing the market segment occupied by SiStar, as well as how good ideas seem to spread fast in K-pop land, I am inclined to let them off the hook this time round.

If there was one move that I really disliked, it would the opening one, where they kneel, splay their legs across the floor, and then almost “rub themselves” on it. Granted it might not be as crude when seen as that description, but I found it too tastelessly sexy for my preferences. Then again, maybe things have changed since 4Minute was criticised for that dance move in “Mirror Mirror”.

More pertinently though, I could easily see female fans being turned off this song by the move, and the overtly sexy air around the 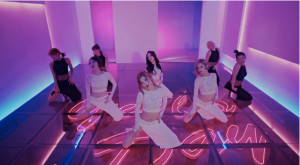 whole thing. Having heard my sister, who seems to think like most most female K-pop listeners that grumbled about the relatively tame suspender dance move in “Expectation”, I just could not really visualise her accepting what was seen in “Something”.

And that would be a shame really, as the song was quite nice to listen to. It seems to be rather subtle in its approach, coming across as a rather gentle song from the first few listens. However, after a few runs, it really seems to sink in, and becomes far more memorable than “Expectation” (which I only seem to remember the chorus for).

Worth mentioning would be the instrumentals in the background of the mix that seem to give the song a classier air to it than first expected, and is something that Girl’s Day have done quite well in. Another thing which they have improved in would be the singing, of how they are finally covering vocal ranges they are comfortable in. This did pay off in their live performances, where their pitches stay consistent for the most part of the performance.

Ultimately, how much you like the song would depend on where you stand with regard to Girl’s Day, or girl groups in general. Those who come into this with low expectations carried over from the old days would be impressed, as would those with an inclination for their K-pop to be more on the sexy side of things. On the other hand, fans of girl groups with a little more “power and equality” behind their images, or those who seek genuine evolution in girl group development, at least where ideas are involved, would not find this interesting.

It would not be fair to give a single score to account for these two types of audiences with diverse tastes, so here goes: 4.0/5 for the first group, and a 2.5/5 for the latter.