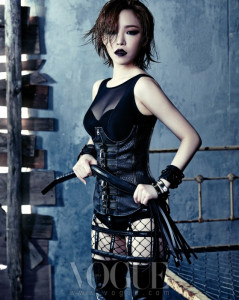 Son Ga-in, beloved maknae of girl group Brown Eyed Girls, has once again graced us with news of another solo album. The mini-album will be called Truth or Dare and will feature six songs including title track “Fxxk U.”

Her last solo release, “Bloom,” was a wonderfully mature exploration of sexuality in an industry which capitalizes on sexy but never individual sexuality. Having proven herself capable of taking on mature themes, expectations are high for both Truth or Dare and “Fxxk U.”

The teaser for “Fxxk U” features Ga-in and a male figure behind a shower curtain. Though the first few seconds hinted at a sexy teaser, the longer you watch, the creepier it gets. Also strange is the disjointed “f*ck you” at the end of the catchy guitar rhythm.

What direction Ga-in intends to take with “Fxxk U” is a mystery but the teaser did its job well in creating interest. Stay tuned until January 27 when the full music video will be released!

Excited for Ga-in’s comeback? What did you think of the teaser?