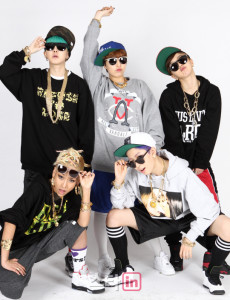 So here’s the thing: summer is over, and time has born out the assertion that 2NE1’s summer releases were not the droid we were looking for. Specifically, a quality that many love about 2NE1 — their bad girl/tomboy/strong woman image — was toned down to play up their fun loving, party going girly side, and it kind of didn’t work. Meanwhile, EvoL didn’t even bother getting up to anything this summer. It seemed like all was lost unless G.I could pull off an end of summer coup d’etat for Queens of the Tomboys.

Indeed, G.I, aka Global Icon, debuted with much promise back in April. With their arrival, Sim Tong Entertainment promised K-pop fans a tomboy concept group, and their first single, “Beatles,” was consistent with this promise. In the music video, Ha Yun, One Ket, Eun Ji, A I, and A Ram are mostly suitably geared in alternately hip-hop inspired clothing, tomboyish hair styles and movements that say, “We are strong, not cute.” The song might have been better if the producers had not had a seemingly hyperactive reliance on autotune. Seriously, even for K-pop that was a lot of autotune.

In September, G.I built on their one track repertoire by releasing a mini-album featuring “Beatles” and four other tracks. The album is an attempt to showcase some diverse talent that Sim Tong thinks that G.I brings to the table, including balladry alongside the more standard hip-pop fare. To highlight this, the first single off the album, “Because of You,” was a standard, sappy sad faced ballad that is fairly boring. The lyrics practically invite the listener to hit the snooze button until a good song worth listening to comes on:

It’s not clear, but one might suspect that Sim Tong continues to worry about the tomboy concept turning people off, hence the ballad to show their softer side. They’d probably be better off sticking to their concept and letting it shine through. 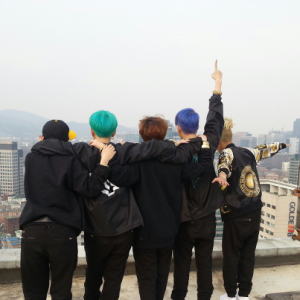 Releasing “Because of You” first was a remarkably bad choice because it really undersells the album, which has some high points. Luckily, the second track of the album delivers. “Gi-yeuk” (also known as “G”) opens with an inspired sittar solo, a nod to the international nature of K-pop inspiration and production. The track is designed to get the body moving. The lyrics are still of questionable quality, but luckily, it matters a lot less thanks to decent production. The autotune is a lot less noticeable than on “Beatles,” and it is on this track that for the first time the listener really gets to hear what the rappers sound like. And they sound good. They’re not great, but neither was Big Bang in the beginning.

The album continues into the other major release, “Booshit.” After seeing the “Beatles” video, which was kind of low budget, one might vaguely expect this one to be at least as interesting, if not more. But in that case, one would be wrong. The music video, like the song, is bland. Even with collaborator Dok2’s contributions, there’s really not much exciting happening there, and the internet seems to agree: after being up on YouTube for two weeks, the video has barely cracked 40,000 views. Meanwhile, the song itself is meant to really display the group’s swagger — if you aren’t sure, check out the “SWAG” as it flashes across your screen. But really, this has been done already and EvoL and 2NE1 do it better.

Speaking of swagger, the final new track, “Diddy Dum,” actually has some. The tempo picks up with some heavy techno-synth in the background while the ladies tell us about how they are the future, how hot they are, how we can’t stop them, and how this — their song, their album — is a “mind-blowing kick.” They definitely get an A+ for swag-effort here, although it’s not clear that it’s merited, which maybe makes it a little bit laughable.

One question that came to mind is why this would be acceptable when someone like G-Dragon does it but not when G.I does it. Well, one obvious answer is that GD is GD, and he’s earned his stripes. Others will definitely say that it’s never okay, and it’s actually highly annoying when G-Dragon does it. Both sides are understandable, although at the end of the day, it’s probably the case that G-Dragon has earned his creative license to spout random self-aggrandizing stuff. On other hand, enough of the growing G.I fan base will probably eat it up, and maybe that’s what really matters. Besides, this style of talking is a grand tradition in hip-hop, how ever unattractive or silly it may seem when certain people use it.

The mini-album overall is not a complete throwaway, but this probably won’t be entering into regular play on my iPhone anytime soon. That’s harsh, but on a more positive note, G.I have shown that there is potential. They’ve got the rapping chops, no doubt. The problem is that the song writing and production is a bit of a disaster zone. It’s generic, and they are women who are trying to prove a point. No one does that by being boring. They say that their “charms are endless,” but frankly when the album is finished, I’m glad it’s over.