Every once in a while, there’s a rookie group that sparks immediate reaction from the online community, and for now, that’s Global Icon (GI). The new girl group is being produced by Sim Tong Entertainment — who you might know from their boy group Tritops — and with a name like “Global Icon”, you know they’re pushing it quite hard. GI is playing to the trend of girl groups who don boyish concepts, and because of this, they’re already being compared to groups that have ever had any concepts that weren’t aegyo or sexy — and this includes the boy groups.

GI’s concept is a mish-mash of boyish outfits, feminine outfits, plenty of make-up, very short hair, and neon colors. Thrown together, their concept seems to be “confidence” more than anything else. It’s refreshing to see that the girls have been outfitted in clothes that actually look good on them, verses the common, baggy hip-hop attire that comes with “boyish” concepts. They alternate between sneakers and thick-heeled boots, and between sports bras (with jackets) and graphic tees (with skinny jeans). Their shimmery harem pants could easily have been lifted out of a male idol’s wardrobe (cough, EXO, cough), but that’s balanced out by strapless sequin tops under jackets, which come off quite feminine. 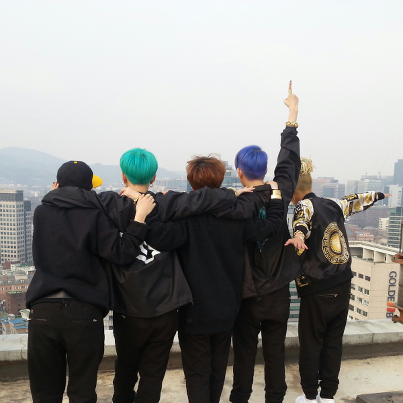 What stands out more than the outfits is the makeup and hair styling. It’s unusual, to say the least, to have an entire girl group sport extremely short hair. As opposed to the balance we usually see — with at least one member out of the group having long (or longer) hair — GI has every one of its members sporting edgy dos. With cropped styles dyed in interesting colors, Sim Tong’s made it difficult for audiences to perceive the girls as being strictly cute, or sexy — they seem to have pulled off a combination of both.

Similarly, despite loading on the makeup, it isn’t the soft, sweet colors we see in “cute” concepts, or the smoky-eyed, red-lipped styles we see in “sexy” MVs; their lipstick shades range from black, to purple, and bronze, and their eye makeup (including glitter and jewels) range similarly in color and fashion. The fact that it’s obvious to me shows that they’ve probably done something right here. That’s not to say that all of it is good, but the styling is definitely unique. Speaking of the conspicuous, if that’s a legitimate facial piercing on that one member, she’ll be the first female idol I’ve seen with one, and that would certainly take their edgy image up a notch. 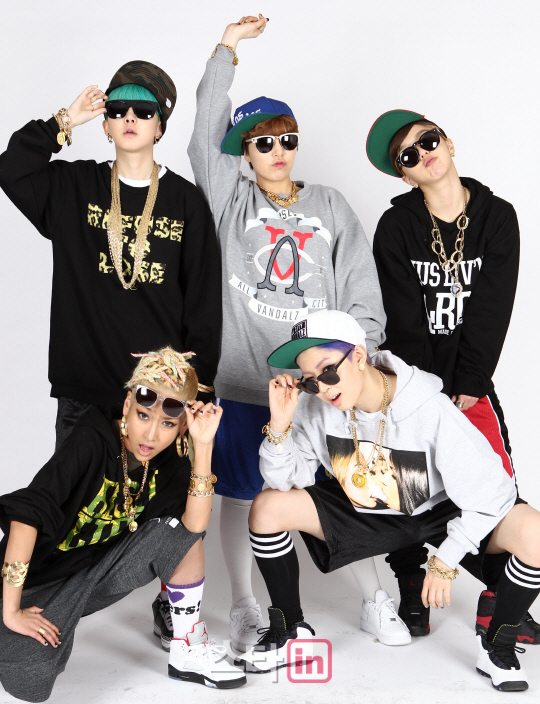 With all the above being said, it’s unfortunate that their debut MV — “Beatles” — has felt like a letdown. To speak fairly, there were both good and mediocre moments. The opening and closing scenes in the mouth of a neon green skull is fun and somewhat creepy, which adds to the direction that GI’s headed toward; but the chain-link fence and boxer themes are devices that’ve been overused in K-pop. The latter point sticks out particularly: why can’t MV producers innovate more? Honestly, If I have to see one more “hard core”-themed video, with a chain-link fence, I’m going to scream.

Another stylistic observation is the amount of green used in their debut clip. Save for the neon green rhino that gets several close-ups (huh?), the skull, coffin-shaped speakers, and breakfast cereal, exude a kind of cohesiveness with their green tints. However, for every good thing in this MV, there’s a little extra something that seems to be wrongly placed; for instance, there’s the spilling paint cans and spray paint cans, a prop detail that’s been used one too many times. Intriguing as the members may seem, they don’t redeem the video’s K-pop clichés. 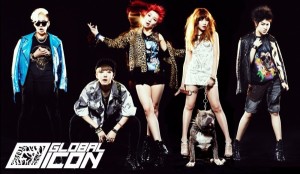 On a positive note, although the dance is simple, the rhythm has a certain punch that makes it addictive to watch. It fits well enough, so much so that I’ve been egged on to mime along. Another positive note is that the first live performance of “Beatles” by GI has been received even more positively by the K-pop community than the MV. Although the song has a fair amount of autotune in it (not that there’s anything unusual about that in pop music) the members of GI have been able to deliver their rap/vocals quite well, as opposed to lip-synching. They’re already showing ten times more confidence and skill than most rookies debuting these days, which is a huge point in their favor.

With a steady electronic rhythm and synth-heavy sound, “Beatles” beats may not appeal to everyone. However, if you’re into tunes (with raps thrown in) that make you sway and groove, GI and “Beatles” may be right up your alley. There isn’t much of a climax to the song; it plateaus, in a good way, to an original beat, which is a welcome change from groups trying to be “different” by layering on too many disparate melodies. If this group is going to continue to focus on electro hip-hop, I couldn’t be happier. It remains to be seen if they’ll be enticed into taking a turn for the cute, which could be a disappointment to their growing fan-base.

The MV isn’t thrilling but there’s real potential in GI when it comes to concept and talent. I’m giving the MV an overall rating of 2/5, for use of too many K-pop clichés, but taking into consideration the song and live performance(s), I’d give the girls a 3.5/5 for their confidence in carrying off a heavily electronic song.

What do you think of GI, readers? Any guesses as to why the song’s titled “Beatles?”