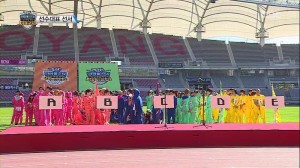 We’re well in to Fall as we approach the end of September–where has the time all gone? South Korea celebrated Chuseok last week and while there were many things to be thankful for, were there things to absolutely LOVE?

The following are the top 5 Things that happened in K-pop last week that I think were a bit more special than the rest. If you’re not up-to-date on your K-pop and tend to not like spoilers–turn back now.

The latest guests on Weekly Idol were BtoB and it was a fun episode where the boys definitely put their reputations on the line as they challenged each other in various challenges for a taste of Korean beef. Watch all the way until the end to find out if Min-hyuk really does have the most chipmunky cheeks of the bunch.

Seo In-guk released the love ballad “No Matter What” for his current drama, Master’s Sun.  The MV has scenes from the drama and speaks of a love worth fighting for–no matter what. Due to last week’s preemption on Wednesday by SBS, we have an extra episode and two more weeks of Master’s Sun to look forward to. And for those of you in despair over what you’ll do at  Master’s Sun completion–need I mention that The Heirs will debut in the time slot the week after? SBS is set up for a three-peat of hit dramas in its Wednesday/Thursday time slot as I Hear Your Voice and Master’s Sun have been ratings hits and The Heirs? With the talent packed cast it has put together, it’ll be a shame if it isn’t one.

Okay, it’s not like VIXX‘s cover of The Wonder Girls‘ “So Hot” was the first ever, but they were just so cute.  The performance was part of SBS Star Face Off Chuseok Special. Their coordi gets a ’10’ for their wild costumes and Ravi get’s extra points for rocking the hot pants and stockings. The boys did a great cover of the song and looked like they were having fun while doing it, too.  And if you haven’t seen their interview after the performance, you really must.

2. A Return to the Block

After being in a state of limbo for most of the past year due to the lawsuit against their former management company Brand New Stardom, the boys of Block B signaled their eminent comeback with the pre-release of the ballad “Be the Light.” The song is about having a love so bright that it is able to guide you out of the darkness–something that Block B must have been wishing for over the past eight months. Block B’s new management company, Seven Seasons, announced that their new mini album Very Good will contain five songs and be released October 2nd.  They will also have a come back showcase on October 3rd at Korea University’s Hwajeong Gym that will be live streamed via  YouTube and Mnet. It’s good to have Block B back, Very Good.

For fans of the K-drama Two Weeks, it’s been a wild roller coaster of a ride as each episode brought new peril to our hero Jang Tae-san (Lee Jun-ki) and his quest to stay alive to save his daughter. The bad guys sunk to a new low last week as they not only kidnapped his ex Seo In-hye (Park Ha-sun), but attempted to kidnap his daughter also straight out of her hospital room. Luckily, Soo-jin (the delightful Lee Chae-mi) was no dummy and escapes as Jang Tae-san gets there just in time–finally able to figure out the bad guys’ devious ways. What happens next was one of the most gratifying scenes of the whole drama–I almost wish Jang Tae-san decided to get rid of the bad guy. There’s just two days until the operation date and two episodes left to air until the completion of Two Weeks. I hope my K-drama lovin’ heart can handle this week’s Two weeks.