Another One Bites the Dust: Infinite's L Caught in Dating Scandal 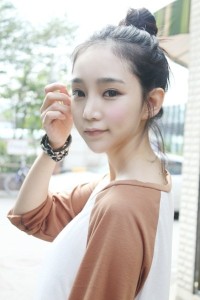 Four new idol couple rumors in less than 48 hours?! Alright, Universe — where’s the K-pop I know and love and what did you do with it?

Infinite’s L is the latest idol to be caught up in a dating rumor this week, alongside Kim Woo-bin, T-ara‘s Soyeon, and f(x)‘s Sulli. Thanks to the work of fans-turned-idol-vigilantes, netizens have uncovered enough photographic and Twitter-related evidence to conclude that L has been hiding a special lady friend from the rest of us for goodness knows how long.

And who’s the lucky lady? Why, it’s no one other than Kim Do-yeon. Never heard of her? Don’t feel too bad — her only claim to fame is a guest appearance on the tvN variety show Martian Virus, where she talked about her raging chocoholicism for one episode. She’s also an ulzzang. I didn’t think that ulzzangs were still much of a thing in Korea, but whatever.

The netizen folk don’t seem to be too happy about this latest development, but this time the source of their rage doesn’t seem to be rooted in fangirl butthurttedness over L’s possible changed relationship status. Rather, it appears that from the information gathered thus far, Kim Do-yeon…doesn’t seem like a terribly pleasant human being.

Netizens have come up with a bunch of reasons to support their distaste for Kim Do-yeon, ranging from “She’s cheap-looking!” to “She might’ve made oppa cry during a concert!” But the most incriminating of the lot seems to be centered around one of Kim Do-yeon’s friends and her passive aggressive (or just plain aggressive) tweets in regard to L taking a picture with actress Han Boreum, which might’ve fueled a fight between L and Kim Do-yeon. The friend tweeted (supposedly in regards to the photo): 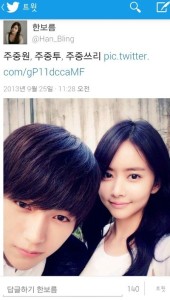 Because of Boreum, my close friend is having some real issues with her boyfriend. I really hate Boreum… I want to cut the hair off of Boreum’s tail. Don’t touch my friend’s boyfriend!

To make matters worse, netizens also noticed that L then posted a series of tweets that sounded like typical fan-fodder (“I like you more than anyone else!” “I don’t go out with anyone but you!” ), but looking at the bigger picture, it seems that these tweets were instead directed at Kim Do-yeon.

Man, I don’t have the energy to be wracking my brains over this new idol couple, or even over L’s questionable choice in relationship partners. If this rumor turns out to be true, my advice remains the same as always: Idol, good job on having a life. Fans, your OTP isn’t real.

The K-popiverse has been rocked pretty hard these past two days due to these dating rumors, and I won’t lie, it’s pretty exhausting to watch. Can’t we just get to a point where the companies have the balls to make an official announcement about a hot celebrity couple before the netizens find out for themselves? If anything, the netizens deserve a break after years and years of squinting at pixelated cell phone pictures looking for evidence of matching couple jewelry.

In any case, that’s four couples down. Who’s next? Cast your votes below for the next unlikely idol couple to join the September matchmaking marathon!