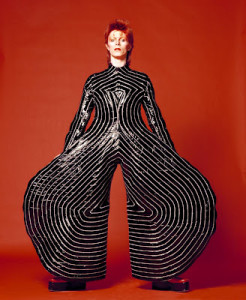 It may be controversial, but it’s got to be said: K-pop is what might happen if David Bowie collapsed into a bunch of minions that ran around and made music-fashion, releasing all the good and the bad.  Of course, K-pop is a thing that has been born out of wonderful, non-linear fusions of American and European musical ideas with Korean musical ideas, tastes and style with a healthy dose of J-pop and Mando/Cantopop influences on the side. David Bowie didn’t get the Hallyu Wave started, and who knows if he cares anything about it, but his influences on pop culture are surely still alive and well, as evidenced by K-pop.

The only obvious potential point of East Asian cultural interaction with Bowie is via a barrier breaking Japanese designer, Kansai Yamamoto. Yamamoto dressed him during critical parts of his most artistically important decade, the 1970s. Yamamoto is also notable because he was the first Japanese designer to present a fashion show overseas, and through him and people like him, cultural exchange between east and west continued along new fronts. Given the Japanese market’s importance to the growth of the Hallyu wave, one might expect that this could have influenced the world of K-pop. But to say that Bowie could have such a powerful influence on K-pop via this exchange seems like a 40 year old, thin, tenuous thread.

On the other hand, at a deeper level, it’s clear that David Bowie lurks in the wave. Whereas western pop artists get pummeled if they stray too much from their original concept, K-pop idols are constantly having to change their concept to keep up with the fans’ hunger for something new and exciting. David Bowie is, at minimum, the original Pop Chameleon. He invented that move. Structurally, K-pop is the next logical step in a capitalist world: the mass commodification of Chameoleon Popism. K-pop is what would happen if you canned Bowie and sold him en masse.

Of course, David Bowie sold (and continues to sell) a lot of records and made (and continues to make) thought provoking music videos, so none of this is to say that David Bowie didn’t and doesn’t have mass appeal. What makes K-pop the next iteration of Bowie-ness isn’t so much its mass appeal as it is its ability to commodify what made David Bowie so appealing. Make no mistake: this has nothing to do with how Bowie sounds or whether any current groups sound like him (although some do). In fact, Bowie’s look and sound was always changing, and K-pop groups often do the same. More often than not, the groups are responding to what’s happening and what’s next in cultural trends. It even seems that K-pop fans have come to look forward to these conceptual changes.

Indeed, it’s obvious to those of us who operate in K-pop fandom that K-pop groups do these scene/wardrobe changes far more effectively than western idols do. In fact, Amy recently argued in The Atlantic that American groups could do to take some cues from K-pop elders like Shinhwa, who, despite being kind of old, continue to be relevant hit makers, unlike the Backstreet Boys, who are now only really able to target a niche market of long time fans.

As an individual example, Big Bang’s G-Dragon is what would happen if David Bowie and Missy Elliott had a musical love child. For the month of August, Vogue Korea has done a cover story on everyone’s (my) favorite idol. “He’s also a musician that can be a part of fashion like the Beatles or David Bowie,” the writer notes. This isn’t the first time G-Dragon has been compared to David Bowie. One fan has taken to using Pinterest to draw the connection. Elsewhere, fans are remixing David Bowie vocals with G-Dragon musical creations:

Meanwhile, in one discussion last year about Big Bang’s crossover appeal in the UK, a writer quipped, “In fairness if we, as a nation, warm to Big Bang it will be GD and the Ziggy Stardust tortured genius vibe we’ll like the most.” A commenter on the piece simply said, “G-Dragon + David Bowie = YES.” 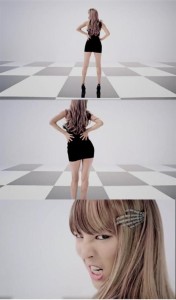 The direct comparisons between Bowie and G-Dragon makes it clear that he’s not just any old example of the Bowie-Hallyu connection. Even more than bandmate T.O.P., G-Dragon is an international fashion leader whose textile tastes have become a guiding force for the rest of the Korean media industry and the Hallyu wave it drives onto foreign shores. Where other idols are more likely to be following trends that have already gotten their start elsewhere, G-Dragon seems intent on being a music and fashion leader, a Bowie for a new generation.

There is much to be said about the commercial benefit of G-Dragon’s fashion pursuits, a motive that didn’t exist at the height of Bowie’s career, but leaving that aside, G-Dragon has become a leading creative force. Yes, he may be wearing a lot of Thom Browne. But this is not just about what he wears. It’s about how he wears it, what he wears it with, and whether he’s playing a woman or a man while he does it. And where have we seen that before? Well, once upon a time, Ziggy played guitar, and sometimes he was wearing things that you might expect to see a “she” in.

Next time you get a chance, watch an old Ziggy Stardust or Aladdin Sane concert. The gender bending will seem familiar. And no, this doesn’t make G-Dragon or the rest of K-pop forty years behind schedule. It proves once again that David Bowie was ahead of his time, that K-pop is timely in its reflection of evolving ideas about gender performance, and we might be right to be worried, if we are worried, that the western mainstream is falling hopelessly behind.