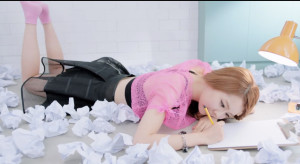 As proof that great masters do not necessarily turn out great protégés, one does not need to look further than Stellar. Like his Shinhwa bandmate, Andy Lee, Eric Mun has also tried his hand at producing a pop group of his own. However, unlike Andy’s relative success with Teen Top, Eric’s girl group, Stellar, seems to be languishing in obscurity.

Admittedly, it is not easy for a new girl group to leave a lasting impression on audiences without a gimmick or an excess of talent — not to mention the fact that the current hot favourites can still do no wrong with the public so far. Still, Stellar does not seem to make it very easy for themselves, with songs that do not come across as particularly memorable and a group image that does not seem particularly defined. Hopefully though, things could start looking up for them with their latest release, “Study.”

On first impressions, the song tries to play up the study theme, with the girls sitting amongst piles of paper, jotting notes 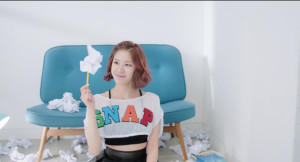 (very fruitlessly, judging from the scrap paper lying around) and of course, the good old habit of playing with stationery.

However, while the video plays slightly to the theme of studying, the song’s lyrics take the theme and run away with it by comparing the act of falling in love to acing an exam. While some of the lyrics are pretty obvious (“If you view me easily, you’ll fail/If you succeed, I’m yours”), some of them have other more veiled meanings (“Don’t make slight efforts, don’t just skim through it”).

And of course, upon deeper thinking, the theme of the song also leads to some interesting ideas, such as how love really is something that requires time and effort on the side of the one chasing it, and for the other party to sometimes sense it. This song provides an interesting perspective more on the side of the former but less of the latter, given how most of the lines from the female perspective seem to be rather submissive in nature (“You probably know that my heart is actually cheering for you/You’ll definitely succeed, I saw your heart and you are innocent, oh oh oh oh”).

While the song’s lyrics do provoke some thought from the listener, it seems unfortunate that the video does not really pay too much attention to the song’s theme. Apart from the girls facing (empty) notes as mentioned earlier, the rest of the video is very much the usual dancing in front of a set and striking a cute pose or two. 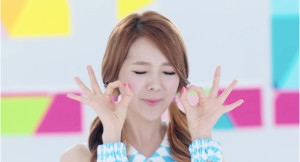 An interesting thing I noticed in the comments section of the video was that somebody said the outfit was too skimpy for the girls. While yes, they did cover lesser than the usual K-pop music video outfits, I did not really have too much of an issue with it, partly due to the colour schemes which gave off a more fresher feel, as well as the generally cutesy feel of the music video.

The dance and tune of the song were largely standard practice of most K-pop girl group songs these days, with most of it being acceptable, but none too outstanding. One interesting part of the choreography though was the punching move, where they seem to jump up and jab the air.

In all honesty though, this song at the end just ranks at a 3.2/5 from me. While I liked the theme of the lyrics and how the song itself seemed not to take itself too seriously, too much of it seem to be rather run-of-the-mill, from the music video sets to the rather safe and simple vocal lines. For those who enjoy something pleasant and with some concepts of love to think about, this song makes for a good choice. For the rest of us, there are far more songs for us to choose from.

And one last thing — surely of all the lessons of love in this song, there was one not mentioned. Love is just like an exam — sometimes you can study all you want for it, but you still might not get what you want or just screw it up on the day itself!