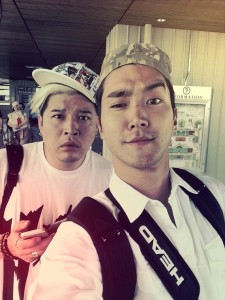 We’re already half way through summer and it’s the perfect time to take a trip, hit the beach, get a tan, eat some good food, and have some summer fun.  And if you’re a certain Super boy band in K-pop you did all that in the past week. I want to go on vacation, too… preferably to a locale with a K-pop concert going on!

The following are the 5 Things that happened in K-pop last week that I think were a bit more special than the rest. If you’re not up-to-date on your K-pop and don’t like to be spoiled–make like a banana and split because there’s all kinds of goodies up in this post that’ll spoil your K-pop dinner.

This past week Immortal Song 2 celebrated the 20th anniversary of renown Korean hip hop trio DJ DOC.  There were great performances from the likes of B1A4, Bada and Sistar,  but it was the duo Norazo that won the night with their hilariously epic rendition of the DJ DOC song “Murphy’s Law” that won the night.

I think no one had a clue that when real life couple Jo Jung-chi and Jung In went to go try on clothes for their wedding pictures that Jo Jung-chi would be the one trying on the dresses.  He is tall and slender though… This couple cracks me up–they’re off beat, funny and have great personalities.  If they do get married in real life they won’t have to worry about their wedding pics!

Exo, all twelve of them, were the guests on last week’s episode of Weekly Idol and it was an entertaining show even for a semi-fan of the group. The show was funny from the start with Jung Hyung-don mispronouncing the group’s name then asking for forgiveness and his and Defconn‘s anxiousness over figuring out who was in Exo-K and Exo-M (because we all  know how devoted(?) Exo fans are). Another fun segment was when each member introduced their super powers and the MCs promised that they would make it look really cool on TV with some CG editing–suure.  They’re rookies in the K-variety realm, but they definitely have potential.

Big Bang‘s Daesung released his latest Japanese single “I Love You” featuring  famed violinist/musician/composer Taro Hakase.  The song is a sad love ballad and Daesung’s voice is awesome as usual. The cinematography for the PV was well done also–the scene with the bubbles was soo beautiful. 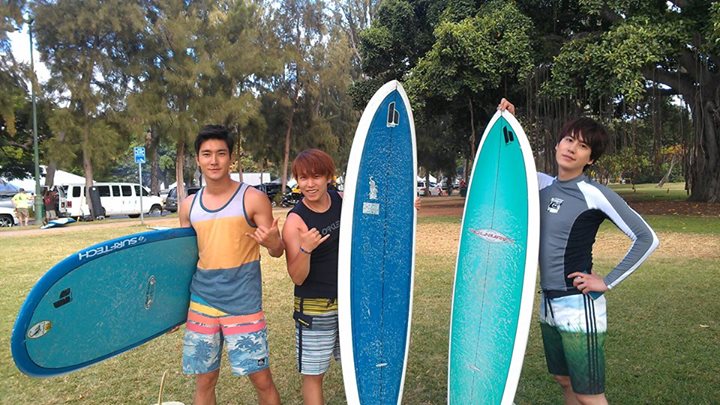 There’s nothing I love better than K-pop idols visiting my island home, well except maybe them visiting for a CONCERT. The eight currently active Super Junior members (Eunhyuk, Kyuhyun, Ryeowook, Siwon, Donghae, Shindong, Kangin and Sungmin) were on O‘ahu for the past few days for a photo shoot which is probably part of the promotions for their upcoming Japanese album.  While here the boys tanned on the beach, got surfing lessons, went skateboarding and cruised the island in a convertible as part of their activities.

They did not however, attend the Hawaii Korean Festival (fun fact: the first Koreans to immigrate to the US came to Hawaii to work in the sugar cane fields in 1903) that happened this past weekend and included kim chi, choco pie and ramyun eating contests and a concert by Kim Tae-woo. Not sure if the boys hit up a lu’au, but they apparently wanted to share a little bit of that aloha spirit with fans by uploading a video of them doing the hula to the SMTown YouTube channel.  It’s A LOT, different from the hula I’m used to, but it was a cute gift to fans. I have no idea how their stylists found the most hideous aloha shirts ever for them to wear…