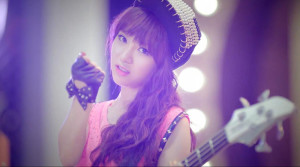 In the MV for “Moya,” AOA Black proves that success is the best revenge…well, that and public humiliation.

Touted as the only female band-idol group hybrid in K-pop, AOA consists of 2 subunits: AOA Black, the 5 instrument-playing members—Choa, Yuna, Mina, Youkyung, and Jimin; and AOA White, the 7 dancing members of the group. (Obviously, there’s some overlap between the 2 subunits, as there are only 8 AOA members in total.) Almost a year to the day after their debut and 2 singles later, the band unit returns with “Moya,” a ’60s pop-inspired confection about a jilted lover, with an equally pleasurable MV.

Those of you with a low twee tolerance needn’t worry about exacerbating your TMJ with annoyed, tight-jawed tooth-grinding: the cutesiness in the video is tempered by an infusion of humor from SNL Korea’s Jung Sung-ho and Kim Min-gyo, a fun plot that manages some clever sleight of hand, and a cartoonish motif that amps up said plot-based fun.

Sonically, “Moya” is a slight departure from AOA’s previous power-pop/synth-pop releases that remind the listener that they’re labelmates with F.T. Island and CNBLUE. Instead, “Moya” is a cute, jaunty update of 60s pop R&B imbued with the adolescent sweetness of the era. It features the ’50s chord progression (think “Duke of Earl” or “True Blue” by Madonna), a quintessential rock, R&B, and pop song structure which was most popular in the ’50s and ’60s. The “Stand By Me”-like baseline, doo-wop piano, guitar upstrokes at the end of each bar, and sax riffs conjure images of beehive hairdos and beauty school dropouts, while the sassy, contemporary pop vocals, rap interludes, and slick production place “Moya” firmly in the 21st century. Jimin’s baby-voiced rapping might elicit an eye roll, but Choa’s vocals more than make up for that shortcoming. All parts of the song work in concert to create a breezy 4 minutes of fun. In short, it’s what your grandpa might call a “nice ditty.” 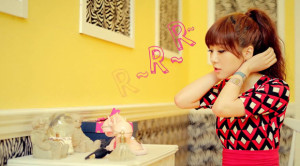 The MV for “Moya” is fun and lighthearted, too—the polar opposite of this summer’s morose-fest of videos. Just as in the song, the MV tells the tale of a woman whose beau has suddenly lost interest and left her wondering where they stand, but the MV goes one step further to show the wayward partner getting his just desserts. It opens with  Fake T. Island (a parody F.T. Island fronted by Jung Sung-ho as Lee Hong-ki) performing a humorous rendition of “I Wish” in front of dancing fans. Kim Min-gyo shows off both his dance moves to a group of ladies in a corner, and a cute guy—the presumed detached boyfriend—dances with a different girl.

Cut to the ladies of AOA Black, each in a color-saturated room. Yuna’s room is arguably the coolest-looking, consisting of a foyer with ombré blue-to-pink walls, her keyboard planted next to the stairs (don’t you play your keyboard in the foyer, too?). Choa, the woman scorned, calls her girls to tell them of her woes. Playing up the cartoon concept, each phone rings with an onomatopoetic illustration: a nice touch. 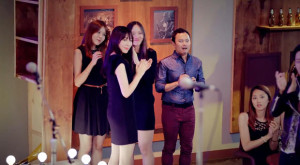 On the phone, the ladies decide to confront the boyfriend—in song. So they head to their dressing room and trade their light-colored coquettish outfits for dark-colored coquettish outfits, Choa getting a flash of the cute guy dancing with someone else in the crowd as she picks the black pleather jacket. They head to the Fake T. Island concert, where they shoo the band off the stage and perform their own song. Initially, the crowd is bewildered and skeptical, but by the end of the song, they’ve been won over. In the band’s moment of triumph, Choa points out the bad boyfriend in question and the crowd’s gaze follows to not the cute guy dancing with the girl but the one behind him, Kim Min-gyo! Misdirection!

One would think that a K-pop MV with a brightly-colored backdrop for a cute-sounding song would be a recipe for precious overload, but there must have been an aegyo mitigation specialist on the creative team because “Moya” manages to be sweet without being cloying. And in fact, the cartoonish motif may have even reigned in some of the cutesiness, allowing silliness, a different child-like quality, to take the stage. The humorous touches and fun plot clinch it for the MV, making “Moya” a pleasant diversion. 3.5/5