K-pop is as much about the music as it is about the fashion, so let’s talk new fashion trends. The newest fashion trend that has been emerging in K-pop is underwear as outerwear. This new trend is provocative and risque, but as a lover of fashion and a loyal K-pop consumer with an appreciation for undergarments in all variations, underwear as outerwear can be very sexy if tastefully put together. The idea is not to be an exhibitionist, but to take clothing items usually reserved to be worn as undergarments and give them a little (or a lot) of visibility. Of course, it should be tastefully done if presenting yourself to an audience. Do the ladies of K-pop make the trend tastefully sexy or it is a fashion faux pas? 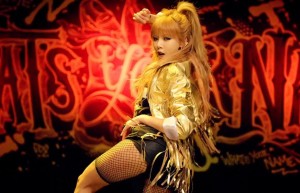 The criticism was there as usual, insinuating that Hyuna is less than a lady and calling her the typical derogatory names. She’s heard it all before, so she continues to make her rounds on the daily music shows, selling her brand of sexy that viewers have either come to love or hate. Most of you are probably familiar by now with her brand of sex appeal and the divisive opinions that surround it, but Hyuna, like most idols, is just showing some skin. Cube hasn’t responded to the criticism because it’s just not big enough to warrant a response, but is Hyuna’s underwear-outerwear look bold and sexy, or is it a fashion fail? 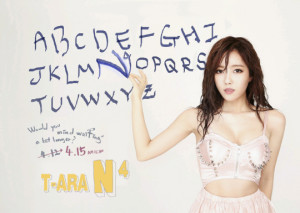 Not to be outdone by 4Minute’s comeback, T-ara‘s sub-unit T-ara N4 also made their debut with “Countryside life.” Hyomin is known for her love of fashion. She helped put together the retro looks for T-ara’s  “Roly Poly” promotions and Dispatch spotted her in Japan shopping for the costumes T-ARA N4 were to wearing while promoting “Countryside Life.”

I’m unsure if she’s the one who put together her outfit for the teaser, but her blush corset with spikes is a mixture of sweet, sexy, and a little dangerous. Corsets have been considered sexy outerwear for a while now and their popularity have made them the underwear turned outerwear poster garment in the West. Korea is more conservative, so I don’t know how popular they are as clothes, but we’ve seen plenty of Korean celebrity pictorials depicting them as sexy undergarments, which is closer to their original purpose. However, Hyomin’s spiked corset is not something you’d wear to bed — well, not unless you’re into that sort of thing. Before you answer that, is Hyomin’s look dangerously sexy or dangerously tacky? 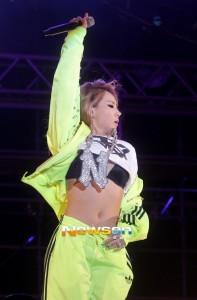 CL is her usual fierce self, rocking a yellow Adidas track suit and a white crop top with the Adidas symbol, proudly promoting the brand as its spokeswoman.  Underneath CL’s crop top is her exposed black bra. While exposing her bra may have not been completely intentional, most crop tops are short enough to reveal a woman’s bra in a high energy performance, so CL was aware of the risk. Also,the crop top peek-a-boo bra trend is a famous fashion pairing, so it could have well been CL’s intention to show us her bra. Do you like CL’s bra exposing fashion or is it too much of a good thing?

Besides her torso and peeping bra, CL’s covered up, but this look from her or any other female idol usually comes with fair amount of criticism. In Korea, women can get away with showing leg, especially a lot of leg and maybe showing a little bit of tush from their short shorts, but cleavage and any exposure of one’s breast is usually frowned upon. Most female celebs wear short shorts, skirts, or dresses, but besides award shows, pictorials, or lingerie ads, you don’t see many of them showing ample cleavage.

CL is also a fan of our next clothing trend, the skintight leg covers, leggings.  Leggings isn’t exactly underwear, but some of the recent designs have been inspired by lingerie. Leggings are as popular among young Korean females as they are to young Western fashionistas since the trend made a comeback in the mid 2000’s. Leggings are less daring than other underwear-turned-outerwear garments because they’re considered legitimate outerwear, even if they are lingerie inspired.

Like CL, the rest of 2NE1 is famous for their love of fashion. Bom has been 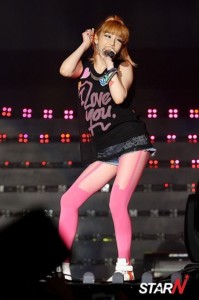 spotted several times flaunting her famous legs in leggings that take their inspiration from the bedroom. In this 2NE1 performance, she’s wearing a pair of sexy pink leggings that draw inspiration from stockings and garter belts. This trend has been going on for a while now, but the short shorts make the look extra sexy. CL, like Bom is also a fan of the trend, and both of them have been putting their best foot forward, spreading the fashion trend of thigh high leggings with lingerie inspired designs or sexy cutouts. Bom has made the look her own, wearing many different versions of lingerie inspired leggings, but should Bom keep rocking her sexy leggings or should she lose the look?

The underwear-outerwear fashion trend has been popular in the West among major stars like Madonna who started the trend in the 1980’s with her cone shaped bras, corsets and girdles,  but modern superstars like Rihanna and Lady Gaga have kept the trend alive, wearing lingerie, underwear, and other bedroom ensembles as their stage costumes.

We’re living in an age where skin is in, even in Korea, which finds itself somewhere between modern and traditional. With Korean conservationism emphasizing wholesomeness by preaching purity and a repressed sexuality of women, an ensemble showing a woman’s bra and panties is going to raise more than a few eyebrows. K-pop stars are trendsetters and barrier breakers with their high visibility, so if they embrace the underwear-outerwear trend, female celebs can spread the fashion trend among ordinary young women.

Many young women in Korea do dress sexy in one way or another. Their choice of clothing for showing some skin is not usually underwear as outerwear, but short shorts to show off  beautiful legs. Having gorgeous legs is another beauty standard, as important as having big eyes, S-lines, milky skin, and the like. Some Korean women are serious about embracing their beauty standards, so even in freezing temperatures, you’ll see them dressed in very short shorts, proudly displaying their beautiful legs, especially in sexy leggings. As more celebrity women embrace revealing outfits, will underwear as outerwear become a growing fashion trend in South Korea?