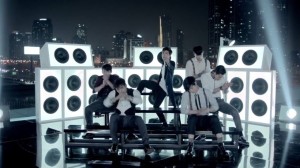 May is turning out to be a massive month in K-pop with its first week seeing the return of K-pop heavies like 2PM and Lee Hyori. There was also the debut of KARA‘s leader Gyuri‘s gender bending K-drama Nail Shop Paris in which MBLAQ‘s Thunder also co-stars. One thing I did not love is the continually dropping ratings for Barefoot Friends which this week got a dismal 2.9% rating–seriously how could their ratings be this low when they’re the lead-in show for Running Man (which was super funny this week by the way)?  The thing is, the cast is great (I love Kim Hyun-joong in K-variety), and when they’re together and interacting it’s gold, but the whole premise of the show is lacking. I hope the PDs pull it together or else the inevitable will happen… cancellation.

The following are the 5 Things that happened in K-pop last week that I think were a bit more special than the rest.  If you’re not  up-to-date on your K-pop and dislike spoilers than read no further or you definitly may be spoiled.

It was Kids King week on Star King and the Hawaiian in me could just not pass up including these three cuties who love dancing hula.

It would be a crime to not include Fei’s winning performance on Dancing with the Stars Korea 3 from this week’s 5 Things.  She performed an emotionally charged rumba to the song “The Moon Represents My Heart” a song made famous by Teresa Teng in the 1970s and a favorite of her mother’s which she had so many memories of.  What was also awesome about the performance is that Fei recorded herself singing the song for them to dance to.

Shinhwa‘s appearance as hosts on Saturday Night Live was definitely one not to miss. The K-pop Kings of K-variety didn’t disappoint and really pushed the 19+ envelope.  Here’s my fave skit from the night, the boys in a museum display because you know, they’re ancient in K-pop.

On the last episode of Weekly Idol, INFINITE were guests and were granting some unusual requests from fans. A fan of Dong-woo asked him to rate the members’ butts since he’s known to like hitting their butts. What followed was a brief, but hilariously specific description of each of his members’ derrières. Spread ’em boys.

Lee Hyori made her long awaited return with the release of “Miss Korea” which she composed herself.   The song is a teaser for her album which will be released on May 21st.  It’s her first release since 2010’s H-Logic which was unfortunately embroiled in plagiarism controversies.  The song reached an All-Kill upon its release and I can understand why–love the song and the MV.  Watch out nugus, Hyori’s back.