Falling into Summer with Juniel's "Fall in L" 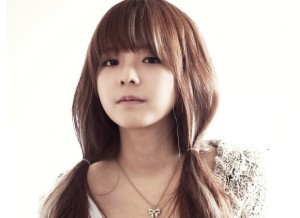 The Female Soloist Comeback Extravaganza continues! However, this review isn’t really a continuation, but an intermission to go back and pick up on a female soloist we missed: Juniel, who released her latest EP “Fall in L” back at the end of April.

Her latest EP diverges from the sound of “Illa Illa” and “Bad Man” and embodies the essence of K-pop bubble-gum pop. This would normally result in boring and tired filler and a saccharine single, but this EP is saved from the abyss of incompetency with some depth via Juniel’s acoustic guitar prowess and overall sophisticated style.  The guitar, in some sense, has taken over a significant part of Juniel’s image, appearing in nearly every MV she has ever made, including her newest one for the song “Pretty Boy.”

The MV is nothing we haven’t seen before:  in a nutshell, a girl dreams about a beautiful man to be with and starts envisioning other, less attractive men to be her dream boy. It’s cute and colorful (a ton of pink included,) right in tune with the rest of the EP. It also might be worth noting that Juniel has become the next K-pop artist to make “great use” of the infamous brick room that I’ve probably seen at least in 10 MVs by now. Honestly, the day when K-pop MV directors stop using that set will be the day EXO makes a comeback. (Sorry, I couldn’t resist!)

Onwards to the album! 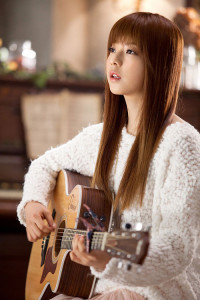 At this point, I’m going to sound like a broken record, but the success of pop music really comes down to how well one executes the “pop formula.”  Sounding formulaic, i.e. saccharine, can be done well, and Juniel is one of those artists that can easily get away with it. The guitar line is the core of “Pretty Boy,” filling out the sound where the thin vocals cannot while grounding the song as well. Juniel’s voice is along the lines of IU’s; sweet, high pitched, and pretty well controlled. She doesn’t quite have the strength of IU, but the simplicity of Juniel’s voice is really her charm. It’s inviting, not too complicated, and refreshingly clean.

“Pretty Boy” is followed by “Date,” a song that is a sensory overload of cute; and frankly kind of bland. This is a kind of song that I could see being played in a Hello Kitty Café, and not really anywhere else.  I’m not a huge fan of this song structure, and the aegyo-laden voice doesn’t help matters either.

“Sleeptalking” is a song that takes advantage of the running theme of cute vocals and injects it into a French inspired melody. I do admit that it is the same “French inspired melody” that comes in every “French inspired” song; however, that standard “Parisian” element really does up the maturity of the song and is a welcome contrast to the vocals. The all-around laid back feeling is much appreciated here, unlike in the previous song. 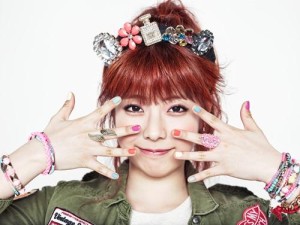 The EP ends with “My Lips,” and contrary to the tacky name and generic sound, it’s my favorite song on the EP—to put simply, “My Lips” is a cleaner composition of HyunA’s “Unripe Apple.” “My Lips” makes no attempt to become something that it’s not, while being youthful, energetic, summery (something great for the Northern Hemisphere right now) and bright. The acoustic guitar creates a bold backdrop to Juniel’s vocals (which are less nauseatingly sweet here,) and coupling the drum line with it only makes the hook even catchier. It’s an addictive pop song, and gives the EP a much-needed kick after the bout of lethargic songs. I like it so much that I’ve played the song 20+ times—a shocker given the general direction of my K-pop tastes (which recently has been Younha, Younha and even more Younha.)

Though the EP is not bad, I’m underwhelmed by the effort from the perspective of musical growth. Juniel had a sophisticated, yet youthful sound from her time in Japan (she’s part of the crop that debuted in Japan first) and it showed in her last two EPs, “1&1” and “My First June.” “Fall in L” on the opposite end almost pitches all of the sophistication entirely out the window and stagnates her musical growth. The differences between the compositional strength of “Illa Illa” and “Pretty Boy” are quite startling. It’s one thing to put out a clean album, but it’s another thing to grow as a musician. Unfortunately, Juniel didn’t accomplish the latter with “Fall in L.”

Overall, I rate this mini a 3.7/5, for being a solid, cohesive effort perfect for a lazy summer day, albeit a tad uninspired.