2012 Closes with the MBC Gayo Daejejun 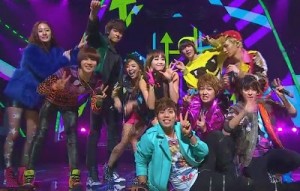 New Year’s Eve brought us the MBC Gayo Daejejun, hosted by MBLAQ‘s Lee Joon, Girls’ Generation‘s Seohyun, Boom, and Lee Hwi-jae. It also brought us MBC’s traditional Blue team versus White team competition, splitting up the performers into two teams, allowing fans to text in their votes for each side during the show.

As the lists show, it was quite the packed night, and overall, the performances were better than expected. It wasn’t as innovative as the SBS Gayo Daejun was, but it was still a good night. The sour note, however, was the incessant chatter of the MCs. They spoke far too much and in a rather annoying manner, primarily Boom and Lee Hwi-jae as the other two didn’t have nearly as many openings for speech. Also a downer were the nine minutes filled with grabbing groups from backstage to fill up time in the most hurried manner until midnight.

The five hour program was filled with performances, collaborations and covers, with the added idea of competition adding a bit of a flair to the night. I’m still curious as to when they pass out those balloons for groups. For example, when did the crowd obtain the blue for Super Junior? But without further ado, I’d like to present, in no particular order, the performances I thought were standouts tonight.

The night started off pitting the Blue team’s SHINee and f(x) against White team’s B.A.P and Secret. The former team went for a cute and fun vocal pop medley while the latter went more sexy and powerful with a dance routine, albeit with a few flubs in choreography. The two performances started the night off on a good note. Though a tough choice, personally, I favored the White team’s performance though the Blue team’s was cleaner. How about you guys?

Roh Ji-hoon and Ailee faced off, spicing up the ending of “The Punishment” with a short performance for the last thirty seconds.

I know most of us are sick of “Sorry, Sorry” at this point; I don’t think we can go half a year without someone covering it again. But 100% and Teen Top did a wonderful job of recreating the stage, especially with their on point vocals and choreography. It led into a good remix of Teen Top’s “Crazy.”

[White] ZE:A’s Kwanghee and Secret’s Sunhwa’s “I Have a Girlfriend” + “Why Do You”

The duets of the night featured couples from the past and present of MBC’s We Got Married. Secret’s Sunhwa keeps surprising with her vocals, especially since all I had heard before this stage–and the recently released “Everything Is Pretty” duet with B.A.P’s Youngjae–was that she was the weak singer of Secret. But she can clearly hold her own. Also in this stage, the dynamic between the two was entertaining, as always.

I didn’t think the live performance for “Sherlock” could get any better. SHINee has been performing the heck out of that song since March, and this is their best live performance yet. The backtrack was loud enough for full effect but not so loud that you couldn’t tell real singing apart from the already recorded track. The vocals were on point, the choreography done well, the charisma just pouring out on stage, and there were no ripped pants. This just has me pumped for whatever the group has to bring next year.

I hadn’t been a fan of miss A’s performances for “I Don’t Need a Man” because they felt like they were lacking the energy present in their other performances. But this stage was so dynamic. And it helped that the song was sped up just a tad. The interactions with the props and dancers emphasized the lyrics even more so, and in an amusing manner.

SISTAR put a rock twist on their addictive “Alone,” one that surprising suited them all, even Dasom. Soyu in particular seemed to be having a ball with the headbanging. Another surprise of the change was that Bora‘s rapping finally found its place.

B.A.P’s solo stage wound up in the second half of the show, and they changed it up through incorporation of drums at the start before launching into a revised version of “No Mercy,” ending with a different dance sequence. Whatever TS Entertainment is doing with them, it’s working.

How cold must it have been at that outside stage? The audience is bundled up to the max, yet the performers have to brave through their three minutes in considerably less layers. Nonetheless, 100%’s performance was one of the better ones of the year, still managing to hold all long notes and impress with their stability.

2NE1 and Lee Hi’s switcheroo made it clear how distinct the vocal palette of 2NE1 is. Though Lee Hi did decently covering “I Love You,” it was nowhere near as good as how 2NE1 does it, while I would have liked to see 2NE1 do more of the Lee Hi’s “1,2,3,4.”

It’s quite a number of performances, but it doesn’t touch the total number of stages from the rather long night. Honorable mentions go to Infinite’s short group performance of Sunggyu‘s “60 Seconds,” Big Bang’s “Fantastic Baby” for Tablo actually bringing out a baby doll at the end, Park Myung-soo‘s mix of songs with B1A4, Ailee, and Crazyno, and JYP‘s energetic “Honey.”

In comparison to SBS and KBS festivities, MBC fits right in the middle of the two. MBC was more delightful than the ordinary KBS Gayo Daechukje, but I don’t think it can top the more innovative SBS Gayo Daejun with its more fluid stages. MBC certainly wins in length, but that’s not necessarily cause for celebration. I’m still miffed about the lack of Block B, but there is always next year.

Which were your favorites from the MBC Gayo Daejejun? Out of the three festivals, which do you think did the best? Did any performances disappoint? How about any surprises?