Side B: Busking Busking to the Top

Welcome to another Side B, everyone! This time, I take a look at 2012’s rising stars, Busker Busker!

Busker Busker started off as a street performance group, created by the band’s lead guitarist and singer Jang Beom-jun. In fact, the band itself was but a subset of the Busker Busker group, known then as Pinky Pinky and with rotating members. The group, and band, consisted mostly of students from the Cheonan campus of Sangmyung University. Jang himself was an animation student, as was bassist Kim Hyung-tae; and after the original drummer left to complete his military service, English professor Brad Moore joined the band, and the name Pinky Pinky was dropped for Busker Busker.

Within a week of Brad joining, Mnet show Superstar K3 began auditions, and he along with Jang and Kim were the only ones with schedules able to accommodate filming. The trio auditioned, but were cut out before the finals. However, the departure of an original Top 10 finalist saw the show give them a second chance, on which the trio capitalised in their first live performance of Yozoh’s “Tokyo Girl.” The original song is a quiet, morose and piano-driven affair, but Busker Busker introduces more elements like guitars, back-up vocals and strings to give a punchier rendition of “Tokyo Girl.”

Their winning cover set Busker Busker up for a successful run on Super Star K3. They finished the competition as runners-up to Ulala Session, and took a break to decide what to do next. Starting off as a street performance project, Busker Busker was now presented with the opportunity to become a bona fide band within the Korean musical industry; there was also the American Brad Moore, faced now with a possible career change as well as communication difficulties with his Korean-speaking band-mates. 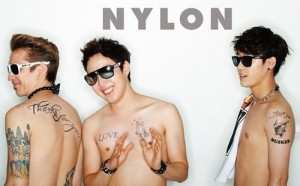 Luckily for us, the band seemed to work things out with Brad quitting his lecturer job), and in late March released their eponymous début album. The album was themed with the spring season in mind (typified by the choice of “Cherry Blossom Ending” as the title track) and all tracks were written and composed by Jang. Selecting only a few tracks from this release was akin to trying to pull out my lower eyelashes — painful — but I have narrowed the field down to these four must-listens:

Busker Busker can come across as a bunch of quiet guys making folksy music with “Cherry Blossom Ending,” but, as anyone who’s seen the trio’s SSK3 performance of “Livin’ La Vida Loca” will know, that doesn’t mean they can’t party either, as shown in the absurd “이상형 (Ideal Type).” Here the guy sings about how he loves everything about his gal, from her “chubby wrist” to her “spiralling cochlea,” and laments how she doesn’t know the extent of his love for her. Busker Busker goes for a ’60s rock sound to complement the eccentric lyrics, with loud brass and energetic playing that just makes you want to jump up and work that knee cartilage.

Another up-beat, but sweeter, song is “꽃송이가 (The Flowers).” The title refers to the flowers in bloom, an example of nature, and the world, rejoicing in the realisation of a couple’s love. The way Jang Beom-jun’s voice touches falsetto range in the chorus is just perfect, but the highlight of “The Flowers” is the use of the harmonica; it, along with the rest of the instrumentation, feels more spontaneous than in the measured and staid “Cherry Blossom Ending,” and there is even a “harmonica solo!”

“외로움증폭장치 (브래드 드럼 한판 쉬기) (Loneliness Amplifier (Brad takes a break))” is pretty much what it says on the tin: drummer Brad gets the chance to give his hands a rest while Jang Beom-jun strums on his guitar and duets with Kim Hyung-tae. but Brad isn’t let off the hook entirely, with the highlight of the song being his whistling. And “Loneliness Amplifier” gives us a chance to hear more of Hyung-tae, too.

As the saying goes, “save the best for last;” and the final track on Busker Busker, “향수 (Perfume),” is just beautiful. Evoking imagery of scent to describe falling in love, “Perfume” is about the first pangs of love and that feeling of being anchored by it. “여수 밤바다(Yeosu Night Sea)” also features Jang’s soaring ad-libs, but the restraint shown in “Perfume” makes his high notes so compelling here.

While their first album has received much acclaim, Busker Busker also released what they call the Busker Busker 1st Wrap-Up Album, containing five new songs. Some of these were those left out of the first album due to not fitting with the album’s spring theme, all composed and written by Jang, with the to-and-fro-ing “정말로 사랑한다면 (If You Really Love Me)” serving as the title track.

One of the three B-sides I want to highlight from this release is “소나기 (주르르루)(Showers)” A cute ditty wherein a somewhat flustered Jang asks for the rain, which has stymied his efforts to chase after a girl, to stop. The minimal instrumentation gives the effect of this being like a sung monologue, allowing Jang’s impatient voice to take centre-stage.

Nusker Busker’s songs often refer to nature, so “네온사인 (Neon Sign)” is an anomoly in that sense. The music flows easily between the full chorus and quieter middle eight, while the lyrics speak of a  girl, likened to a neon sign dispelling the darkness in the narrator’s life. The use of an artificial object could be related to the darker nature of this song, with themes of escape, seeking refuge and unrequited love.

The last song for this Side B is also fairly up-tempo; “그댈 마주하는건 힘들어 (그마힘)(It’s Hard To Face You)” is about also escape, wherein Busker Busker pleads with his ex to not run into him again. Memories of her are too painful, and seeing her again would only reopen old wounds. The frantic chorus is my favourite part, with Hyung-tae also chipping in. As peaceful and serene as Busker Busker’s sound can be, they also do up-tempo really well, especially with giving voice to anxiety; and they’ve done it again in “It’s Hard to Face You.”