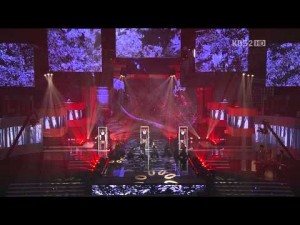 Friday the 28th of December saw KBS kick off the year-end festivities with the 2012 KBS Gayo Daejun, the first of three song festivals to be held for the year. As a start, though, this wasn’t so much a bang as it was a fizz.

KBS seems to have a reputation for the most lacklustre gayo daejuns, and that perception remains — the event felt more like an episode of Music Bank than anything, but a lacking one — save for Ailee, none of the 2012 rookies were in attendance,and YG groups were also nowhere to be seen, among others (*cough*Block B*cough*). In fact, the Christmas special from the previous week was a much more entertaining affair, making this even more disappointing by comparison.

Having made the mistake of livestreaming this gayo daejun, it was up to me to recap it; fortunately, Lindsay kindly volunteered to join me in reviewing the performances. Because many of the stages were only slightly different to those seen throughout the year, Lindsay and I have instead picked out the special stages, followed by our favourite performances.

Gaya: I really liked the stage design for this Gayo Daejun, as well as the use of projectors; having the idols control different environments like that was pretty cool. My favourite part was Shindong making trees grow, and Son Dam-bi also looked gorgeous in her sea-themed dance (though the dubstep was a bit unexpected, and she didn’t appear to be very in-sync with the visuals).

Lindsay: I actually feel the exact opposite, the giant projector images completely dwarfed and overwhelmed the person in front of it. The idea of dance solos was a good one, but it was difficult to discern what was going, choreography wise, because the dancer was always competing with the shadows made by the projector. Other than that bombardment of the senses, Yoona‘s dress was so puffy and white! It was beautiful, very swan lake or fairy princess.

Lindsay: Suzy and Hara dance battle, what? Yeah, that was odd.

Gaya: Suzy and Hara did well enough, but let’s face it, they were mainly there due to their status as visuals. It was actually a well executed performance, and the songs chosen were great, but it wasn’t extraordinary and was a bit too confused by it all to really enjoy it.

Gaya: I was excited when I heard that KBS was bringing together a bunch of male idols to form an idol band. Part of KBS’ special ’90s theme, the band performed three songs, featuring a different singer for each. Yoseob and Changmin were great, but then SHINee’s Jonghyun… he’s a very passionate performer, but sometimes he needs to know when to pull back. I mean, he did get a livelier song, but less flailing would have been nice. And was it must me, or did Taemin look bored?

Lindsay: Taemin was looking a little bored at his keyboard (see what I did there?), but maybe he was just concentrating, hard to tell. I actually like Jonghyun’s song the best, and I thought his flailing was fun to watch at least, but he certainly wasn’t the most polished vocally. On the up side, the idol super band was choc full of live music talent, vocally and instrumentally, which isn’t something we always get to see with K-pop performances. For example, I had no idea Jin-young played the bass.

Gaya: Ah, Jin-young continues to surprise us; I enjoyed the collaboration, and hope there are more of these (and that they include female idols, too).

Lindsay: I’m a big fan of American ’90s music, but I can’t say the same thing for ’90s K-pop, so maybe the whole stage just went over my head. Regardless, I wasn’t wowed by any of the performances in the compilation  SISTAR was cute, and their one rolled up pant leg fashion gave me a chuckle, and B2ST seemed so tickled with their own performance that it made me giggle along with them as they made funny faces at themselves. Other than that, it was a bit boring. I can’t deny that the H.O.T finale was musically relevant with a member of the group actually leading the performance of one of their most famous songs. Overall, the whole “Return to ’90s” stage could have been just that finale, short and sweet, and I would have been satisfied.

Gaya: I think for those who have little exposure to ’90s K-pop or did not grow up with it, most of it would’ve gone over our heads. The performance is going for nostalgia, and I’m sure the idols enjoyed performing old hits enjoyed themselves, as did the audience watching them (this was one of the few times they seemed alive), but yes, this went over my head as well — though I’ve taken a liking to some of the songs… I should check out the originals when I have time.

Idol and Artist: SISTAR’s Hyorin, K Will and Ailee.

Lindsay: Moving away from the ’90s K-pop and into more international territory, the Idol and Artist special stage had three K-pop singers tackling powerful vocal songs in English. SISTAR’s Hyorin sang “Sway” made famous by Dean Martin, K Will sang “Ribbon in the Sky” by Stevie Wonder, and Ailee sang “Halo” by Beyonce. I may not be a big ballad fan, but hearing vocalists show off their talent live is always something I enjoy. As a native English speaker, Ailee’s performance was the easiest for me to listen to because her English is flawless, so I wasn’t torn between enjoying the singing and critiquing mispronunciation of words. That being said, “Sway” is one of my favorite dance songs, and Hyorin’s voice sounded great with it. I have no complaints about K Will’s song, it just didn’t stand out to me, what with how slow it was and how he had his eyes closed the whole dang time.

Gaya: I have to agree about K Will: he sounded beautiful, but his performance was more like a lull between the two ladies’. I did love how each singer had a sole instrument accompanying them. Having the cello for “Halo” was an inspired choice, and Ailee sounded fantastic; but, I feel like the performance could have been better arranged to suit the cello. And while Hyorin’s English pronunciation isn’t up to par, hearing “Sway” played on the guitar was my favourite part of this performance, and Hyorin did sound divine.

Lindsay: Obviously, collaborative performances were only part of the KBS lineup. There were many idol group stages, but these were some of our favourites:

Secret’s “Poison” and “Talk That”

Lindsay: Out of the girl groups performing at KBS, SECRET certainly took the cake for best stage. Despite the fact that they were performing without Zinger (due to their recent car accident) the rest of the members still managed to put on an entertaining and powerful performance, more so than groups with all their members present. Personally, I love theater so the theatricality of their performance appealed to me big time. When they suddenly stepped into the “coffins” and got lifted into the air and then came down in different outfits, wow, I was impressed. Having an extra flair to a performance like this is what separates it from the other groups simply dancing the same old choreography in the middle of the stage. Not to mention that their voices sounded solid live, which can’t be said for everyone else at KBS.

Gaya: SECRET was one of the few groups who performed a montage, which was much appreciated for the variety it provided. I love spectacle and theatrics as well, so I’m right there with you, Lindsay. I loved the coffins, too, though I did snicker a little when I saw their white trench coats crumpled up in a corner following their costume change. Their vocals were on point, and though I missed her, they covered for Zinger well enough.

Gaya: Another favourite performance was Super Junior‘s “Sexy, Free and Single,” which also included segments of “Bonamana” and evergreen favourite “Sorry Sorry.” The resulting mash-up was something I really enjoyed; though, as another writer mentioned to me, mash-ups are pretty easy when all your songs sound the same. It sounded a bit club-like, the transition into “Bonamana” wasn’t the smoothest, and I have no idea what’s going on with Eunhyuk‘s hair, but it was definitely one of the more energetic and engaging performances. The mash-up also distracted me from “Sexy Free and Single’s” chorus, which I hate.

Lindsay: As a closet Super Junior fan, and also a closet mash-up fan, I enjoyed the nod to their past songs, even if everyone else in the entire K-pop world wants to throw every “Sorry Sorry” recording out the window almost as much as they do “Gangnam Style.” As Super Junior gets older they may be getting less popular, but they also have a lot of experience under their belts which results in these kind of well put together, energetic, and well sung live performances. Between their performance, the outfits, and the actual remix itself, it was certainly my favorite stage of the night. And I’m with you, Gaya — why is Eunhyuk’s hair grey-blue?

Lindsay: SHINee just has it all — they are solid singers, incredible dancers, and pull off the most ridiculous fashion. Jonghyun, in particular, was really feeling his vocal power for KBS, between the idol band stage and the “Sherlock” stage; but the other members held their own just as well (if slightly less robustly). They didn’t have a bunch of props, back-up dancers, or projected images, but they didn’t need them; SHINee’s dancing stood on its own, as usual, perfectly executed and in unison. The only issue I saw, and many other people saw as well, was a slight wardrobe malfunction in the area of Taemin’s crotch (luckily, his underpants were black). Perhaps his pants should be slightly less tight next time? Just a note to pass on to his stylist. Seeing such a polished performance reminds me why SHINee is at the top of my K-pop list.

Gaya: I think people have been waiting for SHINee’s pants to split ever since they saw that move. I pretty much lost the plot when the scatting from “Clue” was incorporated SHINee’s MAMA performance, and there are no words to describe the sense of jaw-dropping, keyboard-smashing, table-flipping amazement I felt when Taemin launched into the second verse of “Clue.” And that second verse is Onew-heavy, so getting to see more of SHINee’s leader was a big plus for me. Also, Minho got to sing a line; that was nice. The biggest minus would have been the terrible, terrible outfits, but at least they were a change from the black and white everyone else was wearing. All in all, this was, hands down, the best performance of the night.

As mentioned before, most of the stages were not entirely different save for a remix here and a dance break there, though there were some highlights like: SISTAR’s performance of “Alone,” wherein Hyorin acquainted herself with the stage floor; B1A4 helping SHINee out in the hue (and questionable outfit) department with a technicolour, techno remix of “Baby Goodnight;” Infinite‘s Sungyeol‘s out-of-place but still impressive glittery crown hair dec in the group’s energetic, though ordinary, performance, and; Ailee covering Lady Gaga‘s “Just Dance” with a hip hop aesthetic. But all in all, the KBS Gayo Daejun fell flat as a celebration of the year in K-pop.

Did you watch the KBS Gayo Daejun this year? What were your favourite (and least favourite) performances? How does this year’s festival stack up to previous ones? Please leave your comments below!